Why the ancient Egyptians bred birds of prey 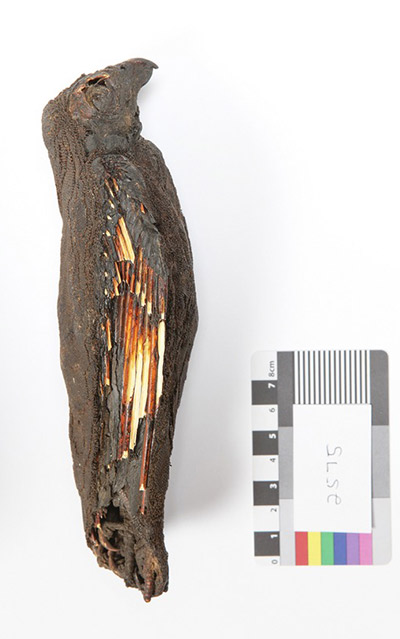 Millions of mummified cats, dogs, birds and other animals fill up museum displays and archives, having been recovered from tombs in ancient Egypt. Analyzing their contents helps researchers understand better their role in ancient Egyptian society as religious offerings. It also provides insight into how people perceived and worked with animals.

One question researchers have pondered is, “How did the Egyptians capture so many birds of prey to mummify as offerings to the gods?”

New research that involved 3D imaging of a mummified kestrel suggests for the first time that they may have bred raptors for this purpose. The study, published in the Journal of Archaeological Science, shows that a mummified kestrel died due to forced overeating. Digital CT imaging revealed that the kestrel was force-fed its last meal – a mouse – suggesting it was kept in captivity.

“The idea of birds of prey being bred to the extent of being kept and force-fed is new,” said Dr. Salima Ikram, Professor of Egyptology at The American University in Cairo and lead author of the study. “Until now, the sheer number of raptor mummies had been a mystery – did they catch or trap them and kill them, raid nests or find them dead? Our results explain why they had so many: we now think it was because of active breeding.”

This is the first evidence to point to mass breeding of raptors as offerings to gods. The researchers behind the study, from The American University in Cairo, Stellenbosch University and the Stellenbosch Institute for Advanced Study in South Africa, say their findings also have implications for the use of birds of prey in falconry for hunting.

Animal mummies were common in ancient Egypt and used in religious ceremonies, often as offerings. Millions of mummified animals have been found, most dating from around 600 BC to AD 250. Ancient Egyptians believed in many gods and associated different animals with them; raptors like kestrels were connected to the sun god Ra.

In ancient Egypt, birds used as votive offerings were prepared by being gutted and dried, then dipped into molten resin and wrapped. However, sometimes the birds were not gutted, giving the researchers a chance to take a glimpse into one particular bird’s life before it died.

The researchers carried out a virtual autopsy on a bird mummy from Iziko Museums of South Africa in Cape Town. The bird mummy, SACHM 2575, was scanned using CT imaging and the team created 3D images of the bird. Based on morphology, limb measurements and beak shape, they established it was a European kestrel (Falco tinnunculus). 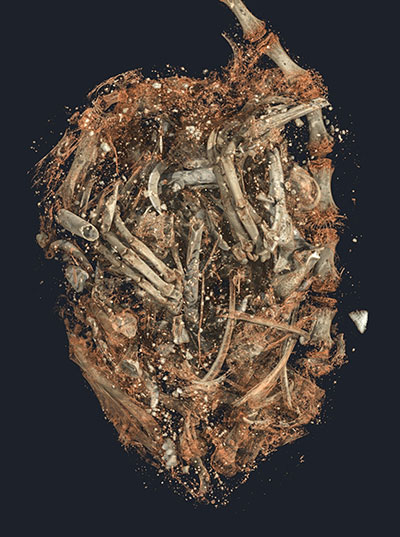 Since the bird had not been gutted prior to mummification, they could also look into its digestive tract to see what its last meal had been. They found the tail of a young house mouse (Mus musculus), which appears to have caused the kestrel to choke to death. Looking further into the gizzard and stomach, they found other mouse fragments, including 27 loose teeth, suggesting that the kestrel had eaten more than one mouse earlier in the day. They also found parts of a small sparrow.

Dr. Ikram said the implications of this discovery were fascinating and far-reaching. “This was one of the most entertaining and exciting bits of research to do,” she said. “When we saw how much the kestrel ate and how it choked, we suddenly had an idea about how the ancient Egyptians managed to mummify so many raptor and the implications about wild animal husbandry and the possibility of falconry being practiced in ancient Egypt.”

Falconry is a method of hunting that involves training a bird of prey to catch animals. There is evidence of falconry practice scattered throughout history; images in Mongolia that date to about 3,000 years ago suggest it was a relatively common practice. There has also been suggestion of its practice in ancient Egypt, but little evidence to support the theory.

“We know raptors were religiously important, but it’s interesting to think about the role they may have had in falconry,” said Dr. Ikram. “It’s also interesting that Egyptians were exerting so much thought and control over nature and that their aptitude with wild animals is considerable.”

The findings open the door to further work to distinguish the different breeding groups by analyzing the DNA of the raptors and determining their sex. The researchers say this will provide a deeper understanding of the role of raptors in ancient Egypt and explain how the Egyptians saw nature and their role in it.

Tens of thousands of mummified remains – animal and human – can give us insights into ancient Egyptian society. But ethically it is important not to destroy the mummies in order to see what’s inside. New imaging techniques, such as those used to investigate the kestrel, enable researchers to assess wrapped mummified remains without destroying them. However, it can be tricky to identify a mummy’s contents using imaging alone.

Now, a team of researchers from the University of Manchester in the UK has taken imaging to the next step, reconstructing the contents using 3D printing. In a paper published in the Journal of Archaeological Science: Reports, research associate Dr. Lidija McKnight and colleagues describe how they studied a mummified bundle and modeled a bone they identified inside.

In ancient Egypt, animal and human remains were often bundled together and mummified; the remains of more than one individual can be found in a single bundle. Analyzing these bundles is challenging, as it can be difficult to identify the species present using imaging alone. The team used radiography to scan a mummy bundle and modeled the contents using computed tomography to produce a 3D image. They then used 3D laser printing to construct a replica of the fragments in the bundle.

The team identified three skeletal fragments that had been positioned to support the structure of the bundle. The researchers were unable to identify the fragments using radiography alone, but reconstructing them using 3D printing enabled the researchers to compare them directly with skeletal reference collections, showing the bones were human.

Elsevier has made the following articles freely available until 28 November 2015:

The Journal of Archaeological Science provides an international forum for archaeologists and scientists from widely different scientific backgrounds who share a common in advancing the development and application of scientific techniques and methodologies to all areas of archaeology. This established monthly journal publishes original research papers and major review articles of wide archaeological significance.

The Journal of Archaeological Science: Reports focuses on the results of the application of scientific methods to archaeological problems and debates. It will provide a forum for reviews and scientific debate of issues in scientific archaeology and their impact in the wider subject.