What is “Precision Medicine” — and can it work?

Beyond the hype, what would it take to deliver personalized and precise healthcare?

The State of the Union address is an opportunity for the US President to put forth grand visions and set forth challenges concerning where the country should direct its efforts and resources. One set of visions that is usually able to cross the partisan divide has to do with the advancement of science and medicine. In his 2015 address in January, President Obama announced an initiative to move towards “Precision Medicine”:

I want the country that eliminated polio and mapped the human genome to lead a new era of medicine —  one that delivers the right treatment at the right time. In some patients with cystic fibrosis, this approach has reversed a disease once thought unstoppable. Tonight, I'm launching a new Precision Medicine Initiative to bring us closer to curing diseases like cancer and diabetes  —  and to give all of us access to the personalized information we need to keep ourselves and our families healthier.

Who could argue with this vision? Everyone wants the right treatment for the right person at the right time; of course we want our healthcare to be precise, targeting the individual person.

Dr. Yoram Vodovotz (@yoram66) is a Professor of Surgery, Immunology, Computational and Systems Biology, Bioengineering, Clinical and Translational Science, and Communication Science and Disorders at the University of Pittsburgh School of Medicine. He has been studying inflammation and immunity throughout his academic career. Along with Dr. Gary An, he has developed the concept of Translational Systems Biology, which incorporates simulated clinical trials and patient-specific predictive models, with the ultimate goal of patient-specific, self-adaptive control of inflammation. Dr. Vodovotz is a co-founder and Past President of the Society for Complex Acute Illness, which is dedicated to applying complex systems and other computational approaches in sepsis, trauma, and related diseases. He is also a co-founder of Immunetrics, a Pittsburgh-based company that is commercializing this mathematical modelling work. He has published nearly 250 scientific manuscripts.

Along with Dr. Yoram Vodovotz, he developed the concept of Translational Systems Biology in the mid-2000s, which incorporates computational dynamic knowledge representation, in silico clinical trials and patient-specific predictive models to accelerate the acquisition and utilization of biomedical knowledge to enhance human health. 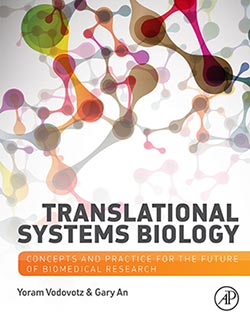 Dr. An is a co-founder and current Board Member of the Society for Complex Acute Illness, created for the purpose of developing multi-disciplinary approaches involving complex systems analysis and dynamic computational modeling of diseases involving acute inflammation, such as trauma and sepsis. He has served on the editorial boards of multiple journals, and has authored over 100 peer-reviewed journal articles, scientific reports and book chapters.

Drs. Vodovotz and An are the co-authors of the book Translational Systems Biology: Concepts and Practice for the Future of Biomedical Research, just published by Elsevier.

But wait — wasn’t that the previous goal of “Personalized Medicine?” What is the difference between the two terms?

The National Research Council parses this out as follows: From the Web Glossary of their 2011 report Toward Precision Medicine: Building a Knowledge Network for Biomedical Research and a New Taxonomy of Disease, they distinguish between “Personalized Medicine” and “Precision Medicine” thusly:

Personalized Medicine (see also Precision Medicine) refers to the tailoring of medical treatment to the individual characteristics of each patient. It does not literally mean the creation of drugs or medical devices that are unique to a patient, but rather the ability to classify individuals into subpopulations that differ in their susceptibility to a particular disease or their response to a specific treatment. Preventive or therapeutic interventions can then be concentrated on those who will benefit, sparing expense and side effects for those who will not” (PCAST 2008). This term is now widely used, including in advertisements for commercial products, and it is sometimes misinterpreted as implying that unique treatments can be designed for each individual. For this reason, the Committee thinks that the term “precision medicine” is preferable to “personalized medicine” to convey the meaning intended in this report.

This is followed by:

Precision Medicine (see also Personalized Medicine): as used in this (National Academies of Science) report, “precision medicine” refers to the tailoring of medical treatment to the individual characteristics of each patient. It does not literally mean the creation of drugs or medical devices that are unique to a patient, but rather the ability to classify individuals into subpopulations that differ in their susceptibility to a particular disease, in the biology and/or prognosis of those diseases they may develop, or in their response to a specific treatment. Preventive or therapeutic interventions can then be concentrated on those who will benefit, sparing expense and side effects for those who will not. Although the term “personalized medicine” is also used to convey this meaning, that term is sometimes misinterpreted as implying that unique treatments can be designed for each individual. For this reason, the Committee thinks that the term “precision medicine” is preferable to “personalized medicine” to convey the meaning intended in this report.

It should be emphasized that in “precision medicine” the word “precision” is being used in a colloquial sense, to mean both “accurate” and “precise” (in the scientific method, the accuracy of a measurement system is the degree of closeness of measurements of a quantity to that quantity’s actual (true) value whereas the precision of a measurement system, also called reproducibility or repeatability, is the degree to which repeated measurements under unchanged conditions show the same results).

Indeed, it may be argued that alarm bells regarding the low likelihood of success of truly personalized medicine deployed across the healthcare spectrum were sounded some years ago. In 2010, we published a paper in Personalized Medicine which we described what is now called Precision Medicine as “data-driven patient segregation.” We noted that fully individualizing therapy is likely to be intractable due to complexity and cost, whereas using data to supplant the current diagnostic criteria and thereby define quantitatively-related patient sub-groups is much more likely to bear fruit. The rub lies in the type of data to be obtained and in the way in which the data will be used to define these patient sub-groups.

These issues, as well as the difference between Personalized Medicine and Precision Medicine, revolve around the fact that Personalized and Precision Medicine are presented as arising naturally from the intersection of “omics” technologies and Big Data algorithms. Personalized Medicine was ushered in by the ability to sequence the Human Genome and that assumption that it would be economically tractable to sequence the entire population – and to tie that information to large databases concerning demographics, medical histories, and responses to existing drugs in order to find what therapies worked best for which individual patients. Precision Medicine is now touted because we can sequence more people and collect more metadata about more existing therapies, but we realize that the likeliest path to success comes from analyzing precisely-defined sub-groups of patients. So, is this really a fundamental change in how we approach healthcare?

In a word, no. Personalized Medicine did not deliver (and Precision Medicine, as currently promoted, will likely not deliver) on its promise because its proponents overlook a fundamental principle of science: correlation (i.e., the output of Big Data) does not imply causality (as represented by mechanistic hypotheses). A snapshot, however broad, cannot capture behavior. In fact, the wider the view encompassed between two snapshots, the more possible interpretations are possible for the transition between them. As such, the breadth of the Big Data approach actually confounds the ability to draw definitive conclusions. Therefore, as currently envisioned, the “omics”-centric/Big Data approach to Personalized/Precision medicine is likely to fail due to the following reasons, which, in our opinion are hard, scientific constraints:

In order to actually characterize behavior, one would need to be able to draw, and then test, possible paths from one data set to another: in other words, what is needed is to capture dynamics that reflect the generative mechanisms by which data are generated. Physical sciences, such as physics and chemistry, are based on these explanatory theories; for biomedical research, we have proposed that Translational Systems Biology, based as it is on mechanistic computational models of health and disease, serve in this role. Biology may be too complex for fundamental theories, but the use of dynamic computational and mathematical modeling directed at translating cellular and molecular mechanisms to generate clinical conditions, the foundational method of Translational Systems Biology, provides a path towards Personalized/Precision Medicine that actually is consistent with the scientific method.

Perhaps equally importantly, basing Precision Medicine on mechanistic computational models is likely to reduce the cost substantially. Why? Because instead of measuring everything and hoping that some of it might be useful, mechanistic models target what should be measured to just what matters. This is not to imply diagnostic tests based on single molecules; quite the contrary. Model-based Precision Medicine would predict what should be measured when or how often in order to predict health outcomes of sub-groups as well as… individuals. Almost sounds like the original intent of Personalized Medicine, doesn’t it?

Watch a video of the authors

Drs. Yoram Vodovotz and Gary An talk about the state of biomedical research at the Harvard Coop in Cambridge, Massachusetts.

Read a related story they wrote for Elsevier Connect: "If biomedical research is a sick patient, is computational modeling the answer?"