Want to create an educational game? Here’s what you need to know

Computer games that motivate kids to roll up their sleeves to get a flu shot. Games that teach midwives how to make births safer. Games that convince men who have sex with men to take precautions against HIV.

Games can change the way people think and behave, and that reality is sparking unusual collaborations with some surprising results.

Engaging young people in science and technology, communicating important health messages to low-literacy populations, and facilitating behavior change for people with chronic conditions are among the motivations driving researchers, educators and health professionals to collaborate with game developers. And the market for such games is growing, according to a recent report prepared by the A-Games Project, a collaboration between the University of Michigan and NYU.

Key “players” in the arena presented their projects and lessons learned in a series of 10-minute talks at the recent 12th Annual Games for Change Festival in New York City. 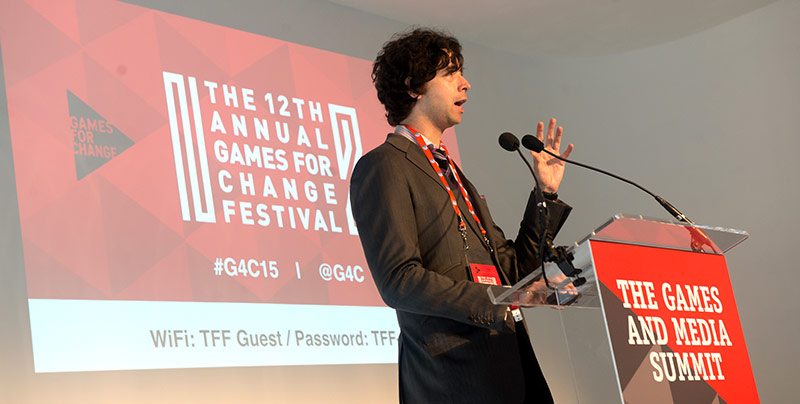 Digital games for the classroom

Ralph Bouquet, Outreach Coordinator for NOVA Labs, described games for STEM (science, technology, engineering, math) education that were recently developed for PBS’s new digital platform. Positioned as a way to “foster scientific explorations among teens and lifelong learners,” the online games provide “a safe space for trial and error, especially for low-performing students,” Bouquet said. He cited a Gates Foundation-supported meta-analysis of STEM education by research firm SRI International that showed “when digital games were compared to other instruction conditions without digital games, there was a moderate to strong effect in favor of digital games in terms of broad cognitive competencies.” More specifically, control group (no games) students “could have been raised 12 percent in cognitive learning outcomes if they had received the digital game.”

Bouquet gave highlights of the online labs, including “RNA,” “a color-coded Candy Crush-type game that challenges users to find RNA that folds into specific shapes”; “Cloud,” which has a storm-tracker feature that allows users to track current storms; and “Evolution,” which launched during the week of the Festival (April 20) and enables users to build a tree of life. All the games were developed in consultation with experts, Bouquet said, with content “aligned to next-generation science standards.” To assist teachers, the labs provide educator guides, videos and other resources for classroom use.

Can games help therapists empathize with their patients? 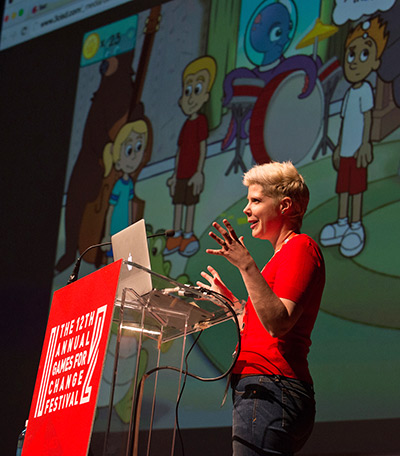 Dr. Doris Rusch, Assistant Professor of Game Development at DePaul University in Chicago, and graduate student Mary Jo Zefeldt, also at DePaul, created mental health games designed to see whether therapists would develop empathy for their patients by experiencing some of the manifestations of their  disorders. For example, for “Perfection,” a game dealing with eating disorders, “we wanted to model the struggle rather than food and calories,” Dr. Rusch said. For “Into Darkness,” a game about obsessive-compulsive disorder, the developers included a team member with  the disorder in order to appropriately mimic the anxiety induced by the condition and how ritual helps stave off that anxiety.

Several obstacles arose. “For one thing, the therapists were not game players,” Dr. Rusch said. “We learned that usability is key: their lack of game experience undermined their ability to understand the game. They were insecure and panicking while reading the instructions, and assumed  it was their fault if a problem arose, rather than a fault of the system.” This was especially problematic for “Into Darkness,” which was designed to elicit anxiety, since the players were already anxious. Thus, the team learned the importance of testing a game with the target audience  early in the development process.

In a different vein, Dr. Elena Bertozzi, Associate Professor of Game Design & Development at Quinnipiac University and member of the Engender Games Group team, described games she and her colleagues developed on small budgets in collaboration with doctors in various low-resource settings.

“Atendiendo Il Parto en Casa,” an expansion of the group’s “Emergency Birth Game,” was designed to teach midwives behaviors that would reduce maternal and neonatal mortality.
However, although Dr. Bertozzi recognized the importance of iterative testing before deploying a game, it was not feasible to pretest this game with the target audience. Therefore, when doctors in Mexico field-tested the intervention with rural midwives, it turned out that 78 percent of the target  audience had never used a computer and had a great deal of difficulty using a mouse. In addition, “it was difficult to measure outcomes,” Bertozzi said, “and so we learned to build in outcome assessments for all of our games as early as possible.”

Working with Dr. Leonard Krilov, Chief of Pediatric Infectious Disease, and colleagues at Winthrop Hospital in Mineola, New York, Dr. Bertozzi and her colleagues developed “Flu Busters!” — a game designed to teach children how a flu vaccine works and why it makes sense to get one.  “The idea is that the children play the game in the waiting room, right before they get their shots so we can see if they actually roll up their sleeves for the vaccination,” Dr. Bertozzi explained.

Although the goal was to encourage vaccination in minority and lower income children, the team only had access to a middle-income population for the initial testing, which was not a true test of the game’s effectiveness. Subsequent testing in the target population showed that while only 27 percent  of lower income children demonstrated increased knowledge about the vaccine, 92 percent were vaccinated the day they played the game compared with 42 percent, the average percentage of those who would have accepted the vaccine without playing the game.

Another project showed Dr. Bertozzi and her collaborators that they need to be willing to change a game based on focus group feedback. “Hot! Horny! Healthy!” is being developed with Dr. Sergio Bautista at the National Public Health Institute of Mexico and others to modify the behavior of  men who have sex with men because Mexican health officials identified a surge in HIV cases among young urban professionals who engage in frequent anonymous sex. The game rewards players for asking potential partners about HIV status and condom use. “We wanted to portray normal men in the game —  people similar to those the players might get involved with,” Dr. Bertozzi said. “But the focus group insisted they wanted ‘ripped’ men wearing a specific type of underwear, so that’s what we did.” 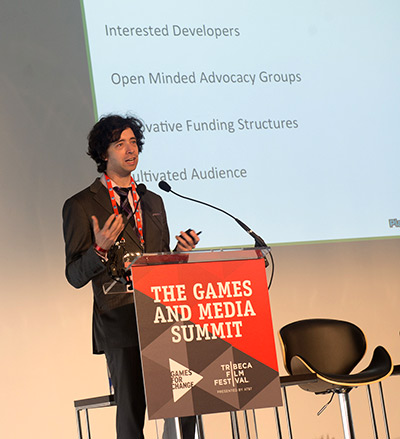 In this session, game designer Nick Fortugno and health games producer Dan Scherlis pooled their experiences working with scientists and offered lessons learned. Though aimed at conference attendees, who were mainly game designers and developers, the lessons are also relevant to scientists, researchers  and health professionals seeking to develop a game concept.

According to Fortugno, it’s important to start with a “summit” — a one- or two-day sit-down session with the game developers and the scientific team — during which the designers learn what the scientists did, what  their findings suggest and how the entire team defines a successful game.

If the team is working under a Small Business Innovation Research grant, everyone needs to know and understand how the goals are defined in the grant and how the grant authors propose to reach those goals, he stressed.

Fortugno advised game developers to “start with the endpoint — the scientific research results — and work back from there,” rather than starting with the researchers’ hypothesis. In addition, before any major work is done, team members need to answer the question, “Why  would anyone play this game?”

Scherlis added that it helps to have a game producer on board who can facilitate communication between scientists and game developers and keep both groups on schedule. And he reminded the audience about the importance of “iterative development” —  testing features of the game repeatedly early in the process to help avoid late-stage failure. The final presentation at the festival was devoted to virtual reality. Dr. Jacquelyn Ford Morie, Founder and Chief Scientist of All These Worlds LLC, and Oculus VR’s Chief Scientist, Dr. Michael Abrash, talked about the origins of the technology and its current potential. Both presenters made  the point that virtual reality technology is poised to move “out of the research lab” (Dr. Morie’s early work with virtual reality was funded largely by the US Department of Defense) and into the mainstream, particularly in light of Facebook’s recent purchase of Oculus. It’s  too soon to tell what this means for science and health game developers, but Facebook founder Mark Zuckerberg clearly sees possibilities. He wrote in a Facebook status update after the purchase:

After games, we're going to make Oculus a platform for many other experiences. Imagine enjoying a court side seat at a game, studying in a classroom of students and teachers all over the world or consulting with a doctor face-to-face -- just by putting on goggles in your home. ...These are just some    of the potential uses. By working with developers and partners across the industry, together we can build many more. ...

What is Games for Change?

Games for Change, which hosts the annual Games for Change Festival, is a nonprofit corporation with the mission of “catalyzing social impact through digital games.” Founded in 2004, the organization “facilitates the creation and distribution of social impact games that serve as critical    tools in humanitarian and educational efforts.” To grow the field, Games for Change “convenes multiple stakeholders, highlights best practices, incubates games, and helps create and direct investment into new projects.” The website provides links to 133 games for social good, and to    development tools and related resources.

Marilynn Larkin is an award-winning science writer and editor who develops content for  medical, scientific and consumer audiences. She was a contributing editor to The Lancet and its affiliated medical journals for more than 10 years and a regular contributor to the New York Academy of Sciences' publications  and Reuters Health's professional newsfeed. She also launched and served as editor for of Caring for the Ages, an official publication of the American Medical Directors Association.  Larkin's articles also have appeared in Consumer Reports,Vogue, Woman's Day and many other consumer publications, and she is the author of five consumer health books.