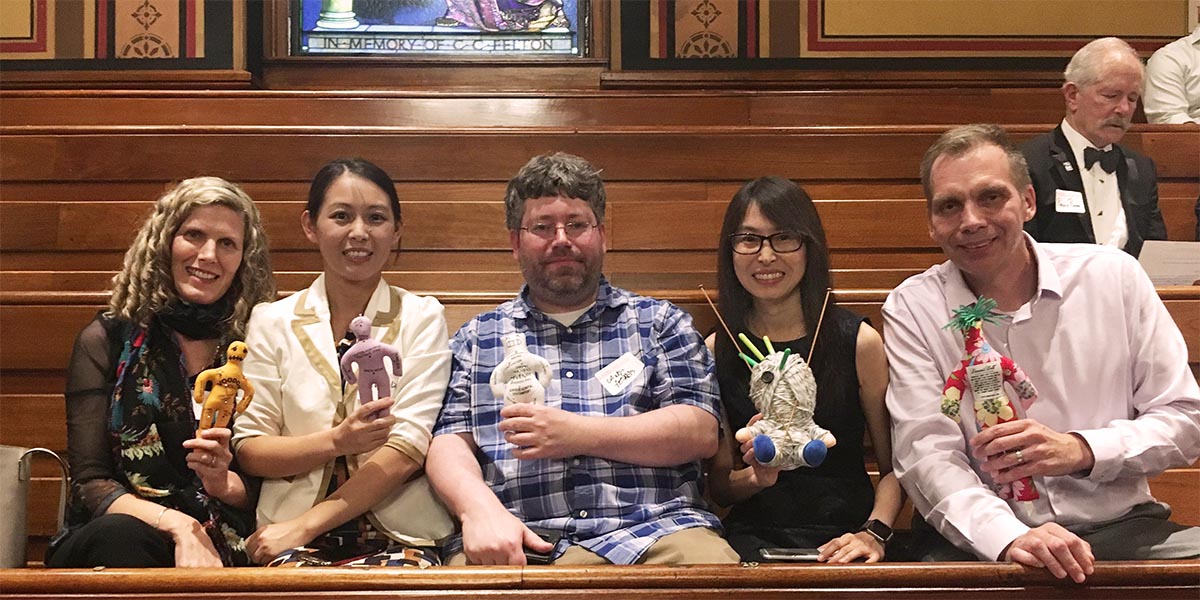 Many researchers have a story about a time they were surprised: an unexpected finding, an accidental hack that improves an instrument, a collaborator they meet at a bar. It can be exhilarating or unnerving and almost always brings a lesson. 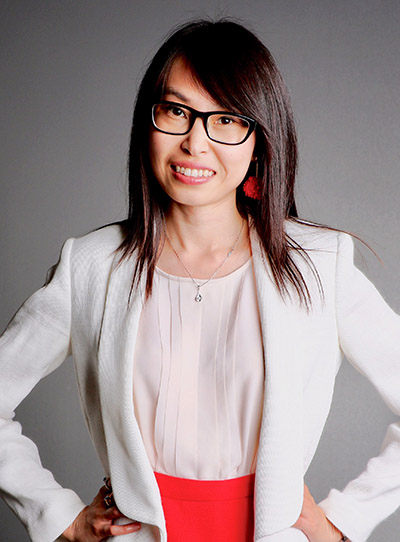 That was certainly the case for psychologist Dr. Lindie Liang, Assistant Professor of Organizational Behavior/Human Resources Management in the Lazaridis School of Business & Economics at Wilfrid Laurier University in Canada, when she published her paper on dysfunctional leadership and retaliation. Rejection followed rejection, which led to acceptance and publication, which resulted in interviews with journalists and international media coverage; before she knew it, she found herself on stage holding a voodoo doll, accepting the Ig Nobel Prize for Economics in 2018:

When I received the phone call saying we’d won, I told one of my collaborators immediately. He said, ‘this is the best day in my research career.’ Then I realized, okay, so this is a big deal.

The Ig Nobel Prize honors “achievements that make people LAUGH, and then THINK.” It was founded in 1991 by Marc Abrahams, who serves as master of ceremonies at the annual ceremony.

Just a few months before receiving this coveted prize, Dr. Liang had been frustrated and confused, having received yet another rejection for her paper on conflict in the workplace. It was her first foray into the world of scientific publishing, and as a PhD student, she was learning a tough lesson about how hard it can be to find the right home for a paper:

After the first rejection, I was devastated, and it was hard to stay motivated and keep going with the paper, to revise it and submit it somewhere else. It was a reality check – it was my PhD dissertation, and my supervisor at the time helped me to understand that rejection is just a part of academic life.

Her supervisor and co-author, Psychology Professor Douglas Brown of the University of Waterloo, shared his story with her: after several rejections, he published his first high-impact paper, which has since received more than 1,000 citations, leading to a book deal and changing his entire career. With renewed motivation and hope, Dr. Liang persisted and got a great result – her paper was published in The Leadership Quarterly, the very same journal her supervisor had ultimately chosen for his big paper.

Crafting an engaging story about retaliation

Dr. Liang is interested in dysfunctional leadership. Previous research had shown that when employees are being abused by supervisors, they retaliate. But why would they do this, knowing their retaliation could attract more abuse? Some researchers had speculated that people retaliate because they want to restore justice, so Dr. Liang and her colleagues wanted to test this hypothesis – using voodoo dolls. 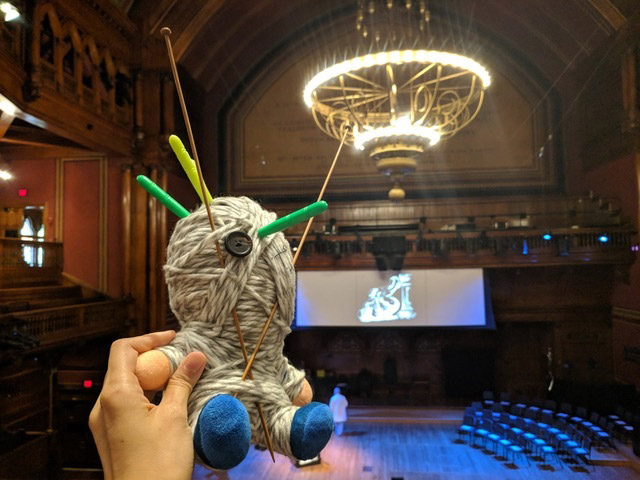 They asked people to recall a time when they had been abused by their supervisor at work, making them feel angry. Participants were then assigned to one of two groups. People in the first group had to open a browser and label the online voodoo doll as their supervisor, then play with it for one minute. People in the second group were shown a screenshot of the exact same screen and asked to trace the outline of the voodoo doll with their cursor. There was a third group of people who were not asked to think about abuse at work, to provide a baseline for comparison. Using an established psychological method, Dr. Liang measured the extent to which the concept of injustice was activated in participants’ minds.

The results showed that playing with the voodoo doll restored people’s sense of justice – the first group had the same low level of activation as the baseline group. In comparison, those who just traced the outline of the doll felt a lot of injustice. These results were replicated in a few different studies, so Dr. Liang and her colleagues are confident about the findings, although they have slightly differing ideas about how they might be applied, as Dr. Liang explained:

I'm not advising people get voodoo dolls for the office, because there's a larger problem that needs to be addressed: abusive bosses and employees’ justice perceptions. But my PhD advisor thinks if it works and it doesn't harm anyone, then why not? He even laughed and said, ‘I'm getting voodoo dolls for all my grad students from this point.’

With compelling findings in the bag, it was time to write them up – not Dr. Liang’s favorite part of the process. As a researcher for whom English is a second language, she often finds writing succinctly about her ideas challenging. In psychology, writing is a major part of the research process, from getting the manuscript finished to addressing reviewers’ comments. So when what Dr. Liang considers “the fun part” of research – getting the results – is over, it’s time to roll up her sleeves.

The key to a successful publication, she believes, is to really nail the first three paragraphs – not only because being able to explain the contribution of the study significantly improves its chances of acceptance and publication, but also because it’s the most important part of the paper for grabbing readers’ attention:

The title of the paper is just as critical, she said. In fact, she believes one of the reasons her paper on retaliation had such an impact was that an associate editor at The Leadership Quarterly suggested she include “voodoo doll” in the title:

It worked – everyone seemed to care about this paper more than the other one, which didn’t have ‘voodoo doll’ in the title. The editor said it might help us attract media attention too, and he was right.

Out of the comfort zone, into the spotlight 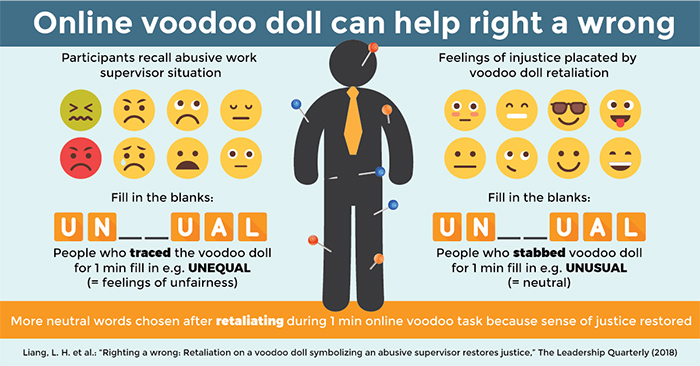 As a researcher, it’s easy to be so deeply involved in the research itself and writing it up that the bigger picture seems to slip away, with the theoretical contribution overtaking the social implications. Dr. Liang noticed Dr. John Antonakis, Editor-in-Chief of The Leadership Quarterly, tweeting about research and saw a few press releases that attracted media attention. With the new attention-grabbing title and finely-tuned introduction, she was ready to go.

The article in The Leadership Quarterly was promoted to the media, and Dr. Liang did some interviews about the study. Being naturally shy, it wasn’t comfortable or natural for her, as she recalled:

I wasn't sure if I could do it without saying something wrong, so I first tried to get my collaborators to do the interviews. But they told me I had to own my research – I guess they were trying to empower me to talk to people about it. After a while, it started to feel good; it’s a way of sharing my research with the public: show them it’s not boring and introduce them to a real problem that’s happening in the workplace.

Winning the 2018 Ig Nobel Prize in Economics six months later brought a second wave of media interviews. In his piece on TheRecord.com, journalist Mark Pratt wrote: “Anyone who's ever been so furious with their boss that they feel like exacting revenge really needs to listen to Lindie Liang.”

The world did indeed listen: Dr. Liang’s research was covered in the media internationally, from The Charlotte Observer (USA) to The Telegraph (UK) to El Comercio (Peru).

The experience helped Dr. Liang see her research and how she approaches it in a new light:

I realized how important it is for us to market our papers. Most of the time we just write, we publish, and then that’s it. But actually, even by writing a plain summary of your paper, removing all the jargon, you can make it relatable to the general public and get some attention.

It’s a lesson Dr. Liang plans to take with her as her research evolves. In a continuation of her work on dysfunctional leadership, she is now looking at its effect on the supervisor’s own health over time. For a second project, in collaboration with researchers in China, she is studying mindfulness and its effect at the individual, team and organizational level. At the same time, she is passing her knowledge on to the next generation:

I learned a lot from my advisor, including about the writing and publication process, and so I'm hoping to work with more graduate students, pass on that knowledge and inspiration and help them become researchers. I’m hoping to continue making an impact through my research and teaching. 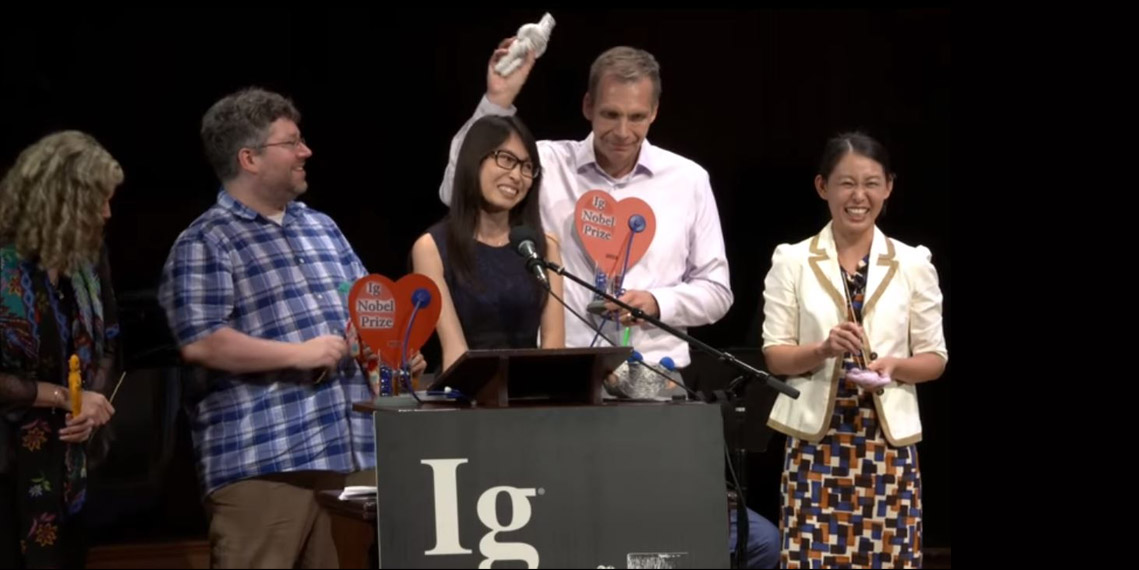 In the spirit of the Ig Nobel ceremony, Dr. Liang acknowledged the inspiration behind her research, taking a playful jab at Prof. Brown:

I really want to take this opportunity to thank my former boss – for teaching me everything about how to deal with abusive bosses.

Dr. Liang isn’t the only researcher who finds writing challenging. Elsevier offers a range of support for researchers crafting their next paper or presentation, from editing and translation services to training on promoting research:

*Elsevier has made this article freely available  until April 25, 2020.

Dr. Lindie Liang is an Assistant Professor of OB/HRM in the Lazaridis School of Business and Economics at Wilfrid Laurier University. Originally from China, Dr. Liang attended boarding school in England and completed her undergraduate degree at the University of Toronto in Canada. She focused on social psychology and was looking for a way to link what she was learning to the real world. An interest in negotiation, conflict and the dynamics between people evolved into an investigation of what Dr. Liang calls “the dark side of leadership.” During her master’s degree and PhD at the University of Waterloo, Dr. Liang worked on a consulting project that helped her realize her interest was really in research and academia.

“For me, discovering new stuff is really exciting – the ability to think of something that happens and that could have implications in everyday life. As a researcher, you can think about questions and problems related to you and come up with a solution. I really like that.”