For updates to this story, see "Elsevier urges US government to respect freedom to publish amid sanctions."

Recently Elsevier communicated to journal editors some changes in US trade sanctions regulations, enforced by the US Office of Foreign Assets Control (OFAC).

Here, Elsevier Senior VP and General Counsel Mark Seeley explains the legal issues and why Elsevier is working with STM publishers and the research community to analyze the situation as it continues to evolve, and pursue the appropriate balance in the laws. [divider]

Elsevier, like most publishers, believes that the free flow of ideas and information is the right principle for science and for society. Being able to communicate globally, in our view, helps to reduce political tension and improve the social network. There will always be some concerns regarding confidentiality, sensitive information and the like, which we understand. But these should be exceptions, carefully thought through and with limited application – not the rule. 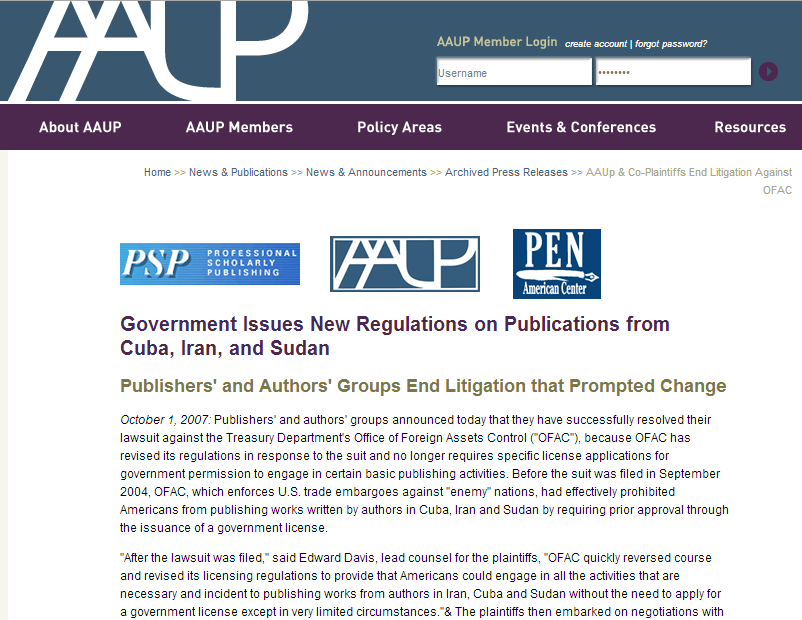 In 2007, the US government issued new regulations on publications from Cuba, Iran and Sudan in response to a lawsuit from publishers.

That is the reason publishers brought suit against the US government in 2004 when the presidential administration narrowly applied and threatened the existence of the "informational materials" exception to US sanctions that had been in US law since 1988 (known as the Berman Amendment).

Publishers were successful in this effort, and the regulations were changed in 2007 to preserve the "informational materials" exception and create a general license for publishing activity permitted under US law, specifically authorizing a wide range of peer review, author and editorial activities.

However, over the past several years, the United Nations, the European Union and recently the United States have put in place increasingly restrictive trade sanction regulations in relation to Iran, and some of these changes affect publishing services. For example:

These laws are designed to exclude these parties from any participation in publishing, including the consideration of publishing journal articles from employee-authors.

Recently we extensively reviewed the changes and evolution in trade sanction policies with respect to Iran, following a query from a corporate employer of an author who was concerned about their personal liability in connection with US trade sanctions. This scenario is a moving picture, and sanctions law communications from the US government and other governments are being issued on a regular basis. However, we felt that recent changes were important enough to warrant a communication with our external editors because of the potential for personal liability on their part. (As noted in our prior communications this is limited to editors who are US nationals and has an exception for Iranian universities and health-care institutions.)

We stand by our belief that generally speaking, restrictions on publishing are inappropriate, and any exceptions should be narrowly crafted. We will work with our other publishing house and industry colleagues, along with research communities and institutions, to analyze recent changes and continue to pursue appropriate balance in the laws.

Editorial decisions should not be affected by the origins of the manuscript, including the nationality, ethnicity, political beliefs, race, or religion of the authors. Decisions to edit and publish should not be determined by the policies of governments or other agencies outside of the journal itself.