The muscles you never think about – until they stop working

Athletes can benefit from respiratory muscle training, but can it help unhealthy people, too?

We breathe in, we breathe out, every minute of every day, and for most of us breathing is not given much consideration. That’s because breathing is under autonomic nerve control. The signals are sent from the brain automatically. The brain determines when we need to breathe based on the signals  it receives from our organs and nerves. Although we can breathe in and out on command – for example, during pulmonary function testing or when completing breathing exercises – respiratory muscle function is primarily an automatic task.

What are the respiratory muscles?

We have two types of respiratory muscles, inspiratory and expiratory, to accomplish this task. The inspiratory muscles contract to draw air into the lungs. The most important muscle of inspiration is the diaphragm; however, the external intercostals assist with normal quiet breathing. Contraction of  the diaphragm increases the space in the thoracic cavity and the lungs fill with air from the external environment. Accessory muscles of inspiration – sternocleidmastoids, scalenes, serratus, pectoralis – contribute less during normal breathing periods and more during active breathing periods,  e.g., during exercise and forced breathing maneuvers. Expiration is a passive process because the lungs naturally want to recoil inward and collapse. During expiration, the lungs deflate without much effort from our muscles. However, the expiratory muscles – internal intercostals, rectus abdominis,  external and internal obliques, transversus abdominis – can contract to force air out of the lungs during active breathing periods. 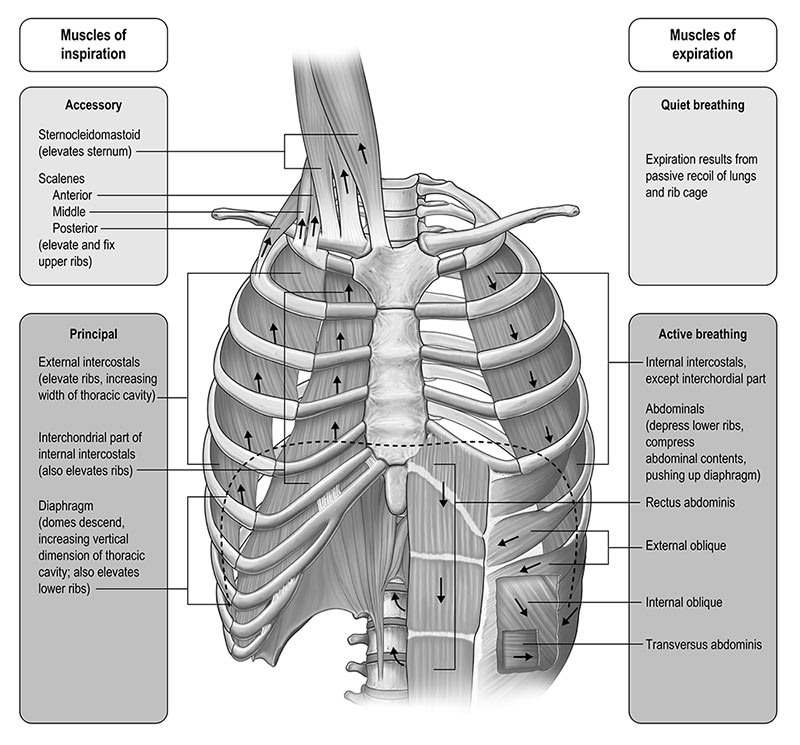 Breathing is a necessary function of life, and most of the time it is effortless. However, if you have lung disease or if you exercise regularly, you may think about breathing more often. That’s because the respiratory muscles (RMs) can fatigue just like any other skeletal muscle. And if the  muscles are overloaded or weak because of disease, then breathing may be the only thing you can think about. In the presence of a medical condition that impacts the lungs, such as chronic obstructive pulmonary disease (COPD) and high thoracic/cervical spinal cord injury, our breathing is altered because of functional and structural changes to the respiratory muscles. When demand increases, the RMs must respond. The initial response is an increase in contraction of the diaphragm  and recruitment of accessory muscles. However, if the muscles are weak or functionally overloaded the demand may not be met.

What happens when muscles fatigue?

Fatigue of the diaphragm causes a decrease in muscle contraction and alternating movements of the abdomen and rib cage, known as paradoxical  breathing. The typical breathing pattern of a person experiencing RM fatigue is rapid and shallow. This type of breathing pattern is not sustainable for long periods of time. Inspiratory tidal volumes are unable delivery fresh oxygen to the alveoli and remove enough carbon dioxide waste. As the RMs  contract more frequently, they require more oxygen and produce more carbon dioxide. The oxygen delivered to the RM gets robbed from other skeletal muscles. So, those muscles begin to experience fatigue.

How can we exercise the lungs? 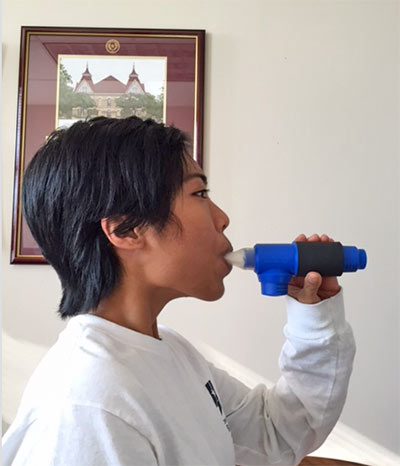 Endurance training involves  breathing at an above normal respiratory rate and tidal volume for a prolonged period of time, usually 30 minutes. This type of RM training is also known as voluntary  isocapnic hyperpnea (VIH). The VIH method requires sophisticated equipment and oversight; therefore, resistance training is used most often when attempting RM training.

Here are some of the more common devices: 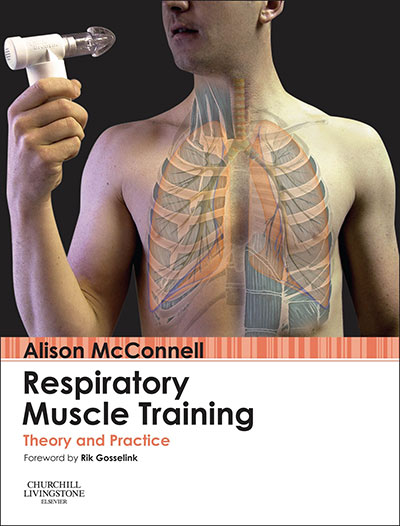 is plenty of literature to support the use of RM training. An Internet search  will return a large number of articles, and YouTube can provide videos of device use. Dr. Alison McConnell, an international expert on RMT, has written extensively on the benefits of RMT for both healthy and non-healthy  individuals. In her book Respiratory Muscle Training: Theory and  Practice (Elsevier, 2013), she discusses the structural and functional RM changes that occur when using a RM training device, such as increases in diaphragm thickness, changes in muscle fiber type (greater fatigue resistance), and improvements in strength. The benefit extends to athletes in most  sports and multiple disease diagnoses.

Focusing specifically on COPD, there is a typical pattern that exists. The lungs are overinflated, the diaphragm tends to be flat at rest and the respiratory muscles are functionally and structurally weak. These changes contribute to complaints of dyspnea – difficulty breathing or breathlessness  – during exercise. Dyspnea associated with physical activity can be quantified using the modified Borg Scale. Avoidance of physical activity because of dyspnea can lead to additional skeletal muscle weakness. Respiratory muscle weakness and fatigue are contributing factors to the breathlessness sensation. A stronger muscle can contract more  forcefully and potentially resist fatigue.

A meta-analysis  in Respiratory Medicine conducted by  Geddes et al in 2008 reported significant improvements in inspiratory muscle strength, inspiratory muscle endurance, exercise capacity, dyspnea and quality of life in COPD patients following IMT. Complete support that RMT can offer additional benefit over pulmonary rehabilitation (PR) alone is lacking.  A 2013  official statement by the American Thoracic Society/European Respiratory  Society on adjuncts to pulmonary rehabilitation questions the benefits of having inspiratory muscle training (IMT) as an adjunct to a whole-body exercise program; although, the authors recognize the benefits of IMT in general. Additional scientific research is needed to determine the exact role RMT  should play for COPD patients enrolled in a PR program.

It is possible that the lack of support is related to study design and training protocol versus questionable benefits of RMT. Given the overall support for IMT in the Geddes et al meta-analysis and by the American Thoracic Society/European Respiratory Society, it seems that future research should focus  on two fundamental questions:

This article is freely available in Elsevier’s open archive:

We can test the strength of therespiratory muscles using a basic pressure manometer or sophisticatedequipment. From this test we can determine if the person has RM weaknessusing predicted equations. But should RMT begin when the person’s RM strengthis at 40 percent of predicted, or 60 percent or 75 percent? Obviously, weakermuscles result in a greater benefit from RM training. Therefore, we can expectto see bigger gains in some individuals. But should we expect the same amountof improvement in someone who is at 40 percent of predicted and someone who isat 75 percent? Also, what training intensity should be used? In general,training intensity should be no lower than 30 percent of the maximum strengthof the muscles. But what is best? Should we start at 60 percent of the maximumstrength, or 70 percent of the maximum strength?

COPD complicates things evenfurther because of the GOLD stageclassification system. Each GOLD stage indicates a more advanced diseaseprocess. Theoretically, the respiratory muscles are negatively impacted to agreater degree when comparing GOLD stage 1 to GOLD stage 4. So should ourtraining regimen change based on GOLD stage 1 versus 2, 3 or 4? As always,additional research is needed. And that new research will surely generateadditional questions on the best way to train the respiratory muscles. That’sthe wonderful thing about research; there is always something new to read thussomething new to learn.

What is arespiratory therapist, and how can I be one?

A respiratory therapist providesspecialized care for patients with cardiopulmonary disorders. RTs are involvedin the care of babies that are born prematurely and have underdeveloped lungs, individualswith asthma or cystic fibrosis, individuals with a spinal cord injury orneuromuscular weakness, older patients with COPD, and anyone that isexperiencing difficulty breathing. RTs manage the mechanical ventilators thatprovide the breath of life for anyone who cannot breathe on their own. RTs givemedications by nebulizer and provide airway clearance therapies to makebreathing easier. RTs are specialists in conducting breathing tests, calledpulmonary function tests, to aid the physician in diagnosing pulmonarycomplications. Ultimately, RTs are involved in the diagnosis, treatment andrehabilitation of patients with difficulty breathing.

In the United States, respiratorytherapists are the primary healthcare provider tasked with testing and trainingthe respiratory muscles. Assessing the strength of the respiratory muscles andproviding the training is an expected part of your day, whether it isimplemented on a patient that is newly extubated from the mechanicalventilator, a patient with a spinal cord injury, or a COPD patient recoveringfrom a pulmonary exacerbation.

Every respiratory therapy education programwill offer several different curricular experiences on respiratory muscletesting and training. As a student, you attend lectures and get hands-on practiceduring didactic and laboratory course work. You learn how to use the devicesthat are available, the proper way to test the strength of the respiratorymuscles, and when and how to initiate training.

As a second phase of instruction, youprovide testing and training on actual patients in the acute care andrehabilitation hospital clinical rotations. Respiratory muscle testing andtraining can occur in the pulmonary function laboratory or at the patient’sbedside. 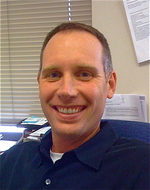 Dr. Christopher J. Russian is an Associate Professor and Director of Clinical Education in the Department of Respiratory Care at  Texas State University, which offers a BS degree in Respiratory Care and a graduate certificate program in Polysomnography.

As a therapist he earned the Registered Respiratory Therapist (RRT) and Neonatal Pediatric Specialty (NPS) credentials from the National Board for Respiratory Care. He also has experience in polysomnography, earning his Registered Polysomnography Technologist (RPSGT) and Registered Sleep Technologist  (RST) credentials. He has a variety of research interests but has a passion for respiratory muscle training and testing related to spinal cord injury, COPD and sleep.