Science hoaxes: Why do we fall for them – and who benefits?

On April Fools' Day, we look at why the public is so quick to believe hoax stories and pseudoscience

A few hundred years ago, scientists had a challenge on their hands when it came to convincing people of the validity of their research. Today, things are different: people are more scientifically literate and tend to retell every research story they hear — even the ones that are worthy of sharing on April Fools' Day.

The town center is bustling, with people from far and wide coming to visit the fair. A woman walks through the crowd and is almost tripped by two small children chasing each other and squealing with laughter. Suddenly, two teenagers hurry out of a large white tent, and one wobbles a little before being caught by a passerby. A small group gathers, and the teens look pale and confused. What’s in the tent?

The woman approaches cautiously, parting the curtains slightly to get a look inside. What she sees defies belief. She continues further into the tent, unable to take her eyes off of the large white table before her. Right there, in plain sight, are tiny people walking around, talking and playing. It’s as if her eyes are putting images onto the table. She looks around the tent and sees a magician wearing an elaborate coat. It must be some kind of trickery.

The woman leaves the fair with a story of magic and wonder, telling her friends and acquaintances – and anyone else who will listen – about the tiny people on the table, and the magician who cast the spell.

In 16th-century Europe, glass lenses were used in fairs and sideshows for spectacle by “magicians” and were associated with trickery. Those magicians – including Giambattista della Porta, who described his use of lenses in his 1558 work Magia Naturalis (or Natural Magic) – would amaze audiences with images cast onto surfaces in a giant camera obscura setup.

So when those very same lenses were used in the construction of scientific instruments, like telescopes and microscopes, the public was hesitant, maintaining that the images produced were simply trickery. Scientists like Galileo and Swammerdam had to defend their use of lenses for research. People were not quick to trust what they were seeing.

The period since that day at the fair is littered with examples of strange stories and science hoaxes. The Feejee Mermaid of the mid-1800s had some people believing the half-primate half-fish was real.

Fast-forward to this millennium, and many people are still convinced by the alien autopsy filmed in 2002. Piltdown Man, crop circles and the disappearing blond gene have all grabbed headlines and minds. Wikipedia lists no less than 50 pages under the category “Hoaxes in Science,” providing us with plenty of truth-bending stories.

According to the Museum of Hoaxes, the 92nd best April Fools' Day hoax of all time occurred in 1981 when The Guardian reported that researchers had developed a machine that could control the weather: "Britain will gain the immediate benefit of long summers, with rainfall only at night.” The public’s acceptance of this was surely in no small part due to the enticing benefits of it being true.

Reaching for the moon

In 2003, an email was circulated widely saying that Mars would appear as large as the moon in the sky on 27 August. Two years later, the hoax persisted, and NASA warned against it, reassuring people: “Disappointed? Don't be. If Mars did come close enough to rival the moon, its gravity would alter Earth's orbit and raise terrible tides.” 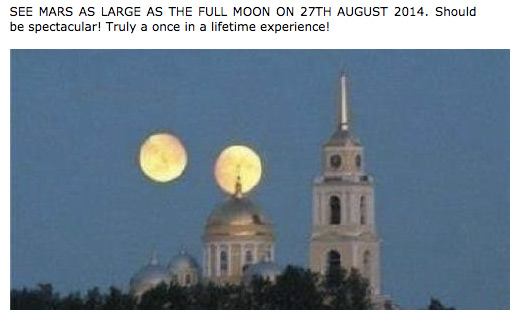 And yet they had to publish another warning in 2009, “Just when you thought it was safe to check your email...” The story hasn’t stopped: last year marked the 11th year of the hoax, which just won’t seem to go away.

Why do people still propagate the myths? “Shocking or strange pictures that people have Photoshopped or taken out of context can really grab people’s attention,” said Max Goldman (@maxjgold), Development Officer at Sense About Science, a charitable trust that helps the public make sense of scientific and medical claims – and spot the fakes. “We’ve started to develop a bit of a theory about why people share things and why they don’t. We’re thinking from the perspective of trying to get high quality scientific information into people’s Facebook feeds.”

It’s about understanding and emotional engagement, he added. “If it’s something graspable, if someone has written a headline designed to provoke an emotional response, then people will share. With Mars and the moon, it sounds so outlandishly improbable that you wonder why people would believe it. But the headlines are designed to get an immediate response.”

The organization has never tried – or even thought it was possible – to get rid of scientific misinformation. Instead, Sense About Science is working to encourage people to question what they read or see – to be more critical of it. “We’re trying to reintroduce people to using their critical faculties, to help them distinguish between good and poor quality information,” explained Max. “It’s not that they don’t have that ability, they just have to be motivated to use it.”

[pullquote align="alignright"]“We see so many misleading stories that have no substantiation; trying to address them all is like playing a game of Whack-A-Mole.”[/pullquote]

Sense About Science encourages the public to tackle suspicious reports. With the publication I Don’t Know What To Believe and the Ask for Evidence campaign propelling their movement, the organization is encouraging individuals to start asking for information, such as whether studies they read about are peer reviewed and based on evidence.

“We see so many misleading stories that have no substantiation; trying to address them all is like playing a game of Whack-A-Mole,” Max said. “We can have much more impact by getting people to tackle these stories directly themselves.” 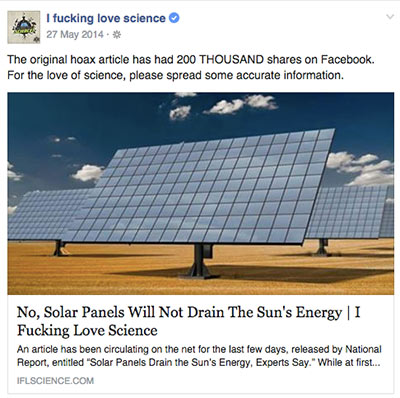 On the surface, we might have the occasional laugh about some of these hoaxes and the gullibility of our friends who believe them (seriously? Mars the same size as the Moon?). But it’s not all fake shark attacks and crop circles: a growing wave of online hoaxes would have us believe that sunscreen can cause cancer, and silver oxide can cure AIDS.

The rise of social media has led to a rise in what’s called click baiting – encouraging people to click through to a website that then cashes in on advertising. “This noise that exists is ugly at times, but you can almost take it too seriously,” Max noted. “If people are sharing, maybe they haven’t even read the article; they may have just seen the headline.”

In fact, Elsevier’s American Journal of Medicine was part of a spoof news story last year, which falsely claimed that AJM would be publishing an article linking Asperger’s to murder by researchers at the “Wyoming Institute of Technology (WIT)." Both the article and the institution were made up.

If there’s a fake medical breakthrough like the AIDS cure, it gets an immediate emotional response and tends to get shared on social media more readily as a result. “In order for us to get more accurate, peer-reviewed scientific information out there,” he said, “we have to make sure the good content is quickly understandable, and that we give people an emotional reason to share. People need to find it interesting, and so do their friends.”

Shining a light on hoaxes

Here’s what you can do to help: