In addition to being used as a recreational drug, marijuana has been used for centuries to treat a variety of conditions, from chronic pain to epilepsy. However, its medical value is greatly limited by debilitating side effects. A study published by Elsevier's Cell Press today in the journal Cell has revealed the molecular pathways responsible for marijuana-induced learning and memory problems. The findings suggest that preventing these side effects could be as easy as taking an over-the-counter painkiller. 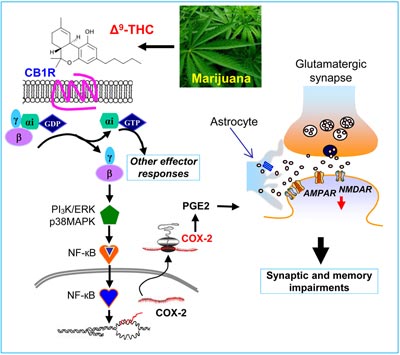 "Our studies have solved the longtime mystery of how marijuana causes neuronal and memory impairments," said senior study author Dr. Chu Chen, Professor of Otorhinolaryngology and Neuroscience at Louisiana State University Health Sciences Center. "The results suggest that the use of medical marijuana could be broadened if patients concurrently take a nonsteroidal anti-inflammatory drug such as ibuprofen."

The main active ingredient in marijuana is Δ 9-tetrahydrocannabinol (Δ9-THC), and drugs based on this compound have been approved by the Food and Drug Administration (FDA) to treat nausea and vomiting in chemotherapy patients. But these drugs have not been approved for a wider range of conditions, in part because of Δ9-THC-induced side effects. Moreover, there are no effective FDA-approved treatments for these side effects because, until now, little was known about the molecular pathways underlying these impairments.

In the new study, Chen and his team discovered that Δ9-THC treatment caused an increase in levels of an enzyme called cyclooxygenase-2 (COX-2) in the mouse hippocampus, a brain region involved in learning and memory. Drugs or genetic techniques that reduced COX-2 levels in mice prevented memory problems and neuronal abnormalities caused by repeated Δ9-THC exposure. Because COX-2 is inhibited by over-the-counter painkillers such as ibuprofen, the findings suggest an easy strategy to prevent the side effects of marijuana.

[pullquote align="right"]Our studies have solved the longtime mystery of how marijuana causes neuronal and memory impairments.[/pullquote]

The researchers also discovered that Δ9-THC treatment reduced neuronal damage in a mouse model of Alzheimer's disease, and this beneficial effect persisted when the animals were simultaneously treated with a COX-2 inhibitor.

"There are no effective medications currently available for preventing and treating Alzheimer's disease or halting disease progression," Dr. Chen said. "Our results suggest that the unwanted side effects of cannabis could be eliminated or reduced, while retaining its beneficial effects, by administering a COX-2 inhibitor along with Δ9-THC for the treatment of intractable medical conditions such as Alzheimer's disease."[divider]

This article is freely available for two weeks, until December 5, 2013:

So do you take the NSAIDs regularly or while experiencing the effects of marijuana?

That's a good question. From looking at the actual study, it appears that Cox-2 inhibitor was administered concurrently with the marijuana. But I'm not sure of the protocol they used, so I'm going to see if one of the study authors can answer your question.

Marijuana will induce many effects because there are many components in it. Based on our study, the memory problem induced by THC is associated with COX-2. This problem might be reduced if you take NSAIDs. However, I do not know whether NSAIDs are able to eliminate other cannabis’ effects.

OK, neat findings but people for the love of God,don't use ibuprofen with every smoking session. The reason being is over use of the pill will cause damage to your stomach and intestine.

Been smoking daily for 40 years without memory loss. Using nsaids daily for 10 years for arthritis has made me gluten intolerant, on accounta the damage done to the gut.

The only known way to die of cannabis is to have a bale of it fall on you.

I understand the strokes and shitting of blood are especially uncomfortable. Damn hippies.

Jacob, you are very wrong. This has never happened....to anyone. You more than obviously do not smoke/use marijuana in any way. Please keep your uneducated, biased comments to yourself.

Please do a little research next time before commenting. There has never been a single case of marijuana induced stoke or gastrointestinal bleeding. Fear mongering just because you dislike marijuana and the people who use it only spreads misinformation and makes you sound truly uninformed. There are many legitimate uses for marijuana and the spreading of lies and fear only keeps this medicine out of the hands of patients who truly need it and the scientists who are continually discovering new uses for this plant.

Get real, Jacob. As a smoker myself, I completely understand where this is coming from. Imagine if you are a 60 year old grandma who decided to take medical marijuana. Yes, the pain relief would be there, but novice smokers can experience a ridiculous range of side effects. On top of that, medical grade marijuana is the strongest, so could imagine how it might affect an aging person whose memory is already fading.

my mom has been using mmj for pain and 'old age'.she's 88 yrs old and her mind is clear as a bell.!

James BDS here and I totally agree with this article!

if the high number of a thing is sin, than its least is sin too. spending marijuana can damage our health and damaging our health is not allowed in our religion. so even if it used for heal our health and taking it as a medical reason, i myself willnot use the marijuana.

I totally agree. You need to take cautous when you take NSAIDs.

I believe there are a number of drugs which are contraindicated in patients taking NSAIDs. (Warfarin, OTOMH).

There are a number of drugs which NSAIDs (Naproxen, Ibuprofen, Aspirin) should not be taken with.

Are there contraindications with cannabis and/or extracts?

It looks to me as though the researchers are confusing THC with cannabis, an extremely variable plant comprised of diverse proportions of cannabinoids, plus terpenes & flavonoids. &quot;To conﬁrmthe ability of exogenous cannabinoids to induce COX-2, we assessed COX-2 expression and PGE2 production in animals injected with the synthetic cannabinoid CP55,940 (CP).&quot; It seems analogous to confusing aspirin with the genus Salix. I did not see any discussion of the use of &quot;cannabis&quot; in this clinical study. So you are free to assert the relationship between delta-9 THC & NSAIDs, but not any correlation between cannabis & same.

Actually I am a Red Seal Chef at a high-end Hotel In a Ski Resort. I have knowledge and know 1000's of recipes, foods ect... Cannabis does not effect everyone the same. In fact my memory has improved and I remember more now then I ever have before. I suffer from chronic pain and use cannabis over any pharma drug including over the counter pain killers. With the right cannabis as your medicine for your condition, it should work for you.

The chart showing the connection between memory loss and marijuana is quite similar to the pathway that leads to Alzheimer's disease. The activation of g protein-coupled receptors leads to the production of peroxynitrites which limit the transport, synthesis, and release of acetylcholine--a compound critical for short-term memories. Peroxynitrites, however, oxidate (inactivate) g protein-coupled receptors including cannabinoid receptors so THC is not likely to add to memory problems in Alzheimer's disease. In fact the opposite, THC is likely a much better peroxynitrite scavenger than non-steroidal anti-inflammatory drugs. Indeed any effective peroxynitrite scavenger (eugenol in various essential oils via aromatherapy and ferulic acid, syringic acid, vanillic acid, and maltol in heat-processed ginseng) can be used to partially reverse Alzheimer's disease as clinical trials have shown (Heo and Jimbo).

What was the dose and frequency of the NSAID taken? How would the dose translate to ibuprofen? Would it be safe to take that amount of ibuprofen in the long term (1 year+ )

I don’t have epidemiological and statistic information on the dose and frequency of the NSAID taken. Although ibuprofen is a non-selective COX-1/2 inhibitor, there is no available information of how to convert the dose of a COX-2 inhibitor to that of ibuprofen. Also I am not clear whether it would be safe to take that amount of ibuprofen in the long term (1 year+). While NSAIDs provide beneficial effects, they also concurrently produce some side effects. As I stated previously, you need to take cautious when you take NSAIDs. My suggestion is to ask your doctor if you want to take an NSAID for long time.

How much ibubrofen should you take with the cannabis?

Chris asked a similar question, and lead author Dr. Chu Chen responded by saying: &quot;I don’t have epidemiological and statistic information on the dose and frequency of the NSAID taken. Although ibuprofen is a non-selective COX-1/2 inhibitor, there is no available information of how to convert the dose of a COX-2 inhibitor to that of ibuprofen. Also I am not clear whether it would be safe to take that amount of ibuprofen in the long term (1 year+). While NSAIDs provide beneficial effects, they also concurrently produce some side effects. As I stated previously, you need to take cautious when you take NSAIDs. My suggestion is to ask your doctor if you want to take an NSAID for long time.&quot;

&quot;These drugs have not been approved (by the FDA) for a wider range of conditions, in part because of Δ9-THC-induced side effects?&quot; &quot;Those side effects&quot; are, of course, the &quot;intoxicating effects,&quot; which are not as dangerous as those caused by many OTC and prescription pharmaceutical drugs, and to which many or most patients have no major objection. So what is the REAL reason marijuana is not approved? Could it be because the DEA and the ONDCP are arms of the executive, and it has been made perfectly clear that approval is not an option?