Mapping America’s knowledge economy: How do the states compare?

As Senior VP of Global Strategic Alliances at Elsevier, Brad Fenwick is responsible for the development of strategic academic partnerships. Here, he writes about the power of research universities to generate economic growth – and a new report that shows how states compare. 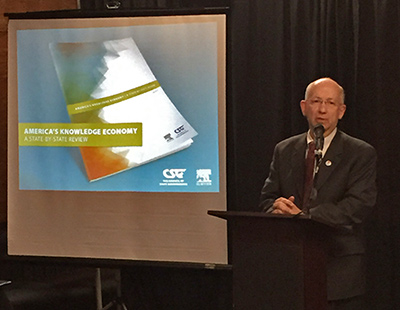 As the national conversation about the value of higher education and academic research increases in volume, a new report documents the landscape of America’s knowledge economy.

America’s Knowledge Economy: A State by State Review gives an overview of the research strengths of each state and potential implications for economic growth. It was developed by Elsevier in collaboration with the Council of State Governments (CGS) and was released today in Albany, New York.

The report is well timed. Recent political debate around continued funding of academic research has left many universities concerned about cuts to much-needed financial support for basic research initiatives, and questioning the future of potential commercialization opportunities that generate revenue streams.

America’s research universities are often an under-appreciated value proposition, but the fact is they have tremendous potential for return on investment. Bio-pharma and tech firms have long-established relationships with leading research universities in key discipline hubs (e.g., the Bay area’s Silicon Valley connections and North Carolina’s Research Triangle Park). And most people don’t realize that downstate New York is now the fastest growing tech start-up hub in the country, second only to California, and the impetus for the development of the Cornell/NYC Tech Campus on Roosevelt Island. 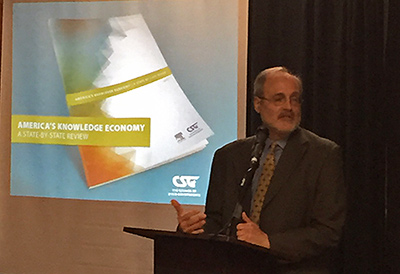 The fact that California’s national patent share is more than three times the next closest state (Texas) may seem obvious, but interestingly it is New Jersey that leads the country in total output from corporate research – a statistic that may well become part of the national political conversation should a certain governor decide to make a presidential bid!

Elsevier formed a partnership with the Council of State Governments to develop this report as an opportunity to bring attention to the important work and potential of American academic research. CSG is our nation’s only organization serving all three branches of state government; it’s a region-based forum that fosters the exchange of insights and ideas to help state officials shape public policy.

Universities are under unprecedented financial stress, with presidents of almost 60 percent of research universities indicating that the current financial model for higher education is not sustainable. For non-research universities, the outlook is even worse. This report demonstrates the contributions to the knowledge economy that flow from universities to the economic well-being and future of each state, not only for new knowledge but also to produce the next generation of highly educated workers who can put such discoveries to work.

Key findings of the report 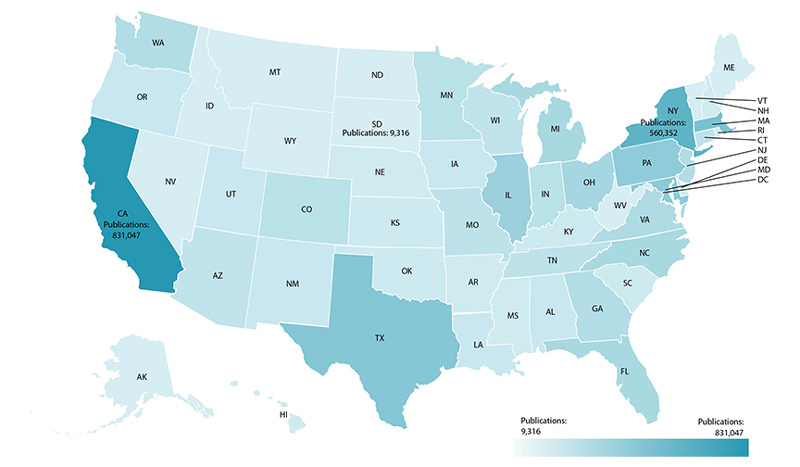 The report was developed using a variety of measures, including data from Scopus, Elsevier’s abstract and citation database of peer-reviewed research literature. It assesses where states have a comparative advantage in research and how they can drive innovation, attract jobs and foster economic growth. Nearly 50 percent of the total US research output is in the areas of medicine (28.7 percent) and engineering (17.4 percent).

America’s Knowledge Economy: A State-by-State Review is on the Elsevier Research Intelligence website.

The report was produced by Elsevier’s Analytical Services team. Analytical Services provides unbiased analysis on research performance by combining high quality data sources with technical and research metrics expertise. Their reports are used by policymakers, funders, and academic and corporate research institutions around the world.

As stated in the report’s introduction, a recent study credits MIT alumni with starting over 25,000 companies (more than 20 percent of which are based in Massachusetts), employing more than 3 million people and generating nearly $2 trillion in global revenues. Granted Boston has a well-established status as a tech incubator with its enviable portfolio of world-class universities, but other cities and states also fare very well, as these highlights demonstrate:

“American competitiveness in the global marketplace starts with strong state economies. Our research capacity is world-class and, as such, is a vital asset to leverage,” said David Adkins, Executive Director and CEO of CSG. “This report provides hard data that state and local municipalities can use to demonstrate the return on investment of academic research as well as to attract potential sources of new economic development opportunities.”

The launch event in Albany was the first of four such activities. Other state-based events are planned for Nebraska, Nevada and North Carolina in the coming weeks. In addition, a national outreach campaign will provide state officials, academic institutions and stakeholder organizations with hard copies of the report as a resource to underscore the value of state-based research as a contributing factor to economic growth potential.