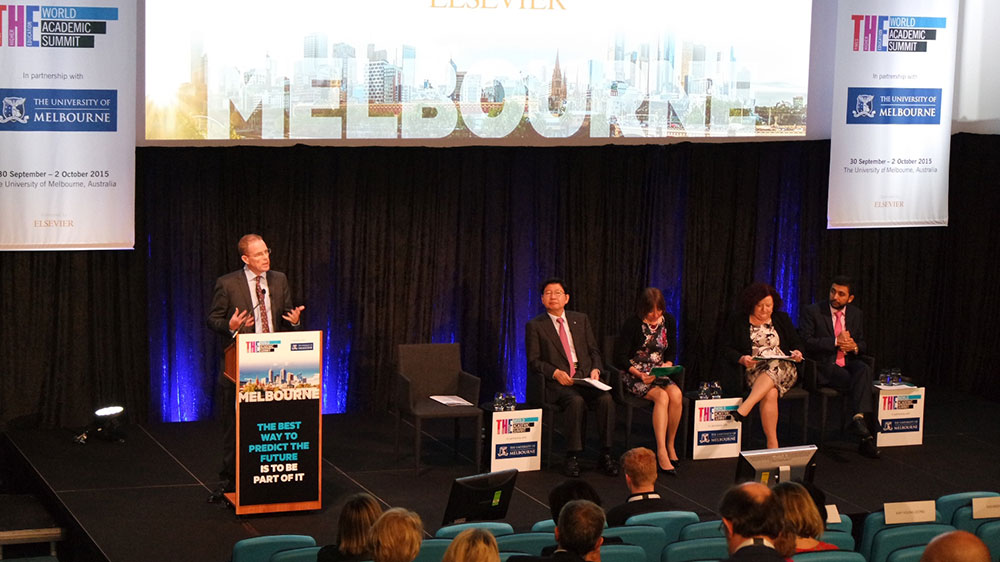 International collaboration – a critical component of the international outlook indicator – accounts for 2.5 percent of the ranking formula deployed by the World University Rankings 2015-2016 recently released by Times Higher Education (THE). 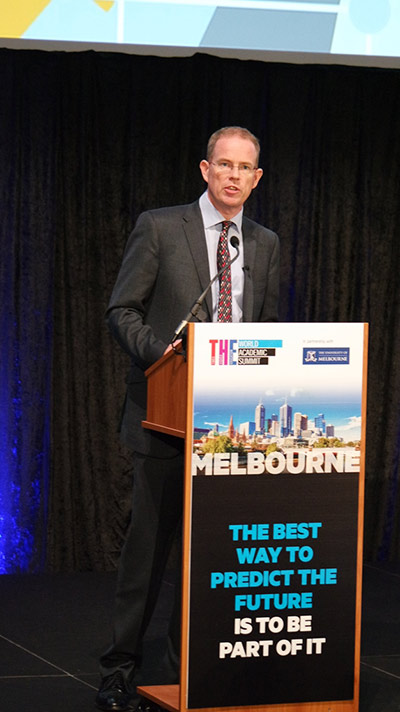 Dr. Fowler explained that researchers collaborate to share their knowledge and combine the perspectives they have to solve complex problems that are increasingly cross-disciplinary in nature: “From a practical viewpoint, collaboration also delivers additional benefits – it enables researchers in institutions to access resources beyond their own, especially funding, talent and equipment. Doing so enables leverage and allows them to magnify the benefits of their own inputs and maximize their own outputs and outcomes.”

But Dr. Fowler also qualified that as an academic publisher, Elsevier looks at collaboration from the perspective of collaborative article publication, which is obviously a limited one:

However, academic experts on the panel agree that we’re still some way away from effectively and meaningfully evaluating international collaboration, at least for some fields of study.

Here are some highlights and excerpts from the panel session.

Dr. Kap-Young Jeong, President of Yonsei University, argued the point that “for a university in a non-English speaking country, the biggest barrier and obstacle (to international collaboration) originate from the areas of language and culture.” He explained that Yonsei’s 4,000 faculty members produce high quality research output that are mostly published in Korean-language journals. In the liberal arts and social sciences disciplines, research revolves and addresses issues specific to the local community so collaborative opportunities with other international scholars on these local challenges are limited. Add to that the complexity and complication of IP rights. President Jeong pointed out that all these factors are limitations and barriers to encouraging joint international research.

Certain disciplines are harder to evaluate

According to Dr. Shearer West, Deputy Vice-Chancellor of The University of Sheffield, UK, researchers from some academic disciplines such as the Arts and Humanities are already collaborating and extremely international, but their work may not naturally lend to measurement:

In fact, international collaboration is built into the DNA of the Humanities subjects, particularly, where researchers look at all parts of the world, all periods of history, and also all languages and cultures. The collaboration is there, there’s a lot of it, it’s very invisible but it’s hard to measure.

Dr. West added that the way Arts and Humanities researchers collaborate internationally is not typically by co-authorship. “It’s more often by working in networks, working on large corpuses of digital Humanities projects, working in that end of the research spectrum rather than the authorship end. So how do you measure that, how do you find out what’s going on?”

Metrics should “do no harm”

To a question if there is a need for more metrics to reward researchers for collaborating internationally, Dr. Margaret Sheil, Provost of The University of Melbourne, cautioned against trying to develop more metrics around international collaboration aimed at the institutional level because that would be difficult and might not be meaningful:

For all metrics systems, the mantra I always gave my staff is to do no harm. You don’t want to develop a metric that creates some kind of perverse behavior that causes the discipline to start behaving in a way that doesn’t make sense.

Dr. Sheil explained that new metrics will particularly affect junior researchers because they see these developments as government signals for them to achieve those new markers.

In the Gulf states, we have scarcity of water and rain. Universities within the same region could work on water desalination projects and issues related to marine environment and marine pollution because of the oil tankers in an enclosed sea mass such as the Gulf. How can regional universities work together towards solving a common challenge or problem?

You can watch a video of the panel discussion here.

Elsevier and the World University Rankings 2015-16

The 2015 World University Rankings by Times Higher Education (THE) draws data from Elsevier’s Scopus database, the world’s largest abstract and citation database of peer-reviewed academic literature. This data source allows THE to analyze more research activity from a greater number of institutions, including those from emerging economies that account for a growing portion of global research. The rankings also include analytics from SciVal, Elsevier’s research metrics analysis tool, which was used to calculate comparative research metrics for the rankings.

Based in Singapore, Jason Chan is the Director of Corporate Relations for Asia Pacific and leads all corporate, media and policy communications efforts across the region as well as acting as a central communications counsel and resource for Elsevier senior management in Asia. He is a communications practitioner of 19 years, having worked at EMC International, Seagate Technology and Hill & Knowlton. He has a BA degree in Mass Communications from the Royal Melbourne Institute of Technology (RMIT) in Australia and joined Elsevier in June 2013.