Employees team up with Workplace Pride to create a group for lesbian, gay, bisexual and transgender employees — one of various around the company

Attitudes towards gay employees have changed dramatically over the last decade. Studies show that employees in general are happier and more likely to stay at a company where gay people are accepted and valued. While most large companies now ban discrimination based on sexual orientation, some are going beyond that to make sure gay employees feel welcome and supported. Many of these initiatives are led by employees. 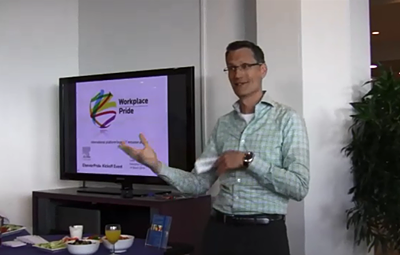 On March 14, employees in Elsevier's Amsterdam office launched a network for lesbian, gay, bisexual and transgender (LGBT) employees called Elsevier Pride Netherlands. The network will organize educational events about creating and sustaining a positive environment for LGBT employees, fundraising activities for local LGBT initiatives like HIV/AIDS outreach, and of course a presence at the annual Amsterdam Pride event, which is a parade of themed boats through the Amsterdam canals.

At Reed Elsevier, various offices around the world have started similar initiatives. For example, LexisNexis has an active group in its Dayton, Ohio, headquarters. In July, employees in Elsevier's Philadelphia office teamed up with their local LexisNexis colleagues to form RE Pride, based on a partnership with the Independence Business Alliance, the Philadelphia chapter of the LGBT Chamber of Commerce. (See the breakout box below.)

To create Elsevier Pride, we teamed up with Workplace Pride, a nonprofit organization based in Amsterdam that that strives for greater acceptance of LGBT people in the workplace and in society. We became familiar with Workplace Pride when our parent company, Reed Elsevier, joined in the Netherlands last August during Pride week. In Amsterdam, Workplace Pride is supported by leading companies such as IBM, ING, Shell, Philips, ABN-AMRO, KLM and Unilever. 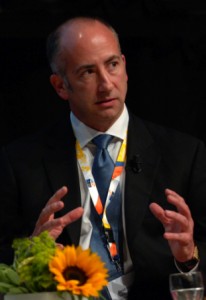 At the Elsevier Pride launch, we were joined by the Executive Director of Workplace Pride, David Pollard, who spoke of the importance of creating a working atmosphere of acceptance, value and visibility for LGBTs.

The launch event was open for all, gay or straight. Pollard, familiar with similar events at other companies, remarked about the strong representation of non-LGBT employees (sometimes referred to as "straight allies"), reflecting a more open and tolerant atmosphere at Elsevier. About 75 people attended, which is roughly 10 percent of the total workforce in Amsterdam — a significantly higher turnout than at similar events, according to Pollard.

I spoke about the strong legal position of LGBT persons in the Netherlands, and the overall quite positive atmosphere towards LGBT colleagues at Elsevier. I quoted our CEO, Ron Mobed, who told employees on another occasion: "I am always struck by just how diverse a company we are at Elsevier, and I count it as a real strength. Our diversity makes Elsevier more creative, more adaptable, and better able to navigate different cultures and customer needs."

I also shared my own positive experience as an openly gay man at Elsevier and recalled the instant, about 10 years ago, when I experienced a homophobic reaction from a leading academic who had been associated with us over many years in an editorial capacity. At some point he asked me whether I was married, and I told him that I lived with my same-sex partner, after which the conversation stopped and became very uncomfortable. 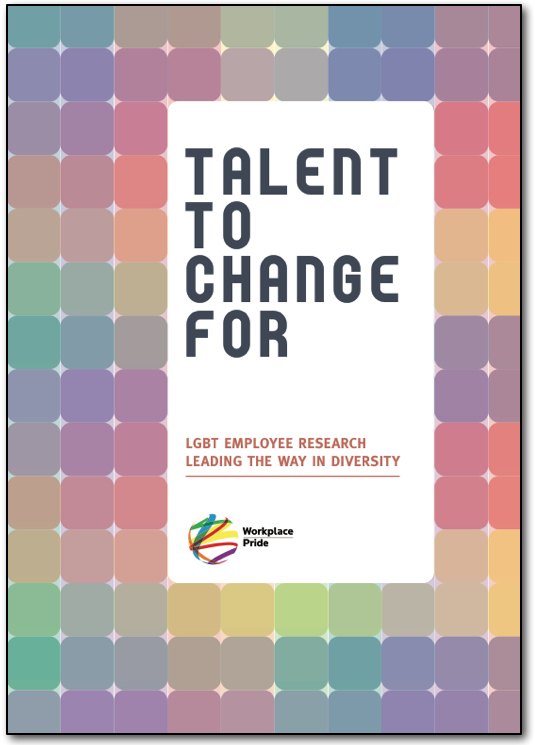 Workplace Pride commissioned this study to explore the changes needed to attract and keep LGBT talent in the workplace. To download this and other studies, click on the image.[/caption]

When I recounted this episode to my then manager after returning to the office, my manager said very clearly that we do not have room for such homophobic behavior and that we should sever the ties with this editor-in-chief. I experienced this as such a strong support as a gay employee.

There is an epilogue. The editor apparently got used to the idea that he had to deal with a gay Elsevier contact, and relations were normalized and even improved. We are still in touch today, and my manager went on to become a CEO at Elsevier!

Why being 'gay-friendly' is good for business

Last year, The Economist published an interesting article on its Schumpeter business blog titled "Of Companies and Closets," which essentially claimed that being gay-friendly is "good for business." Attitudes towards gay employees have changed dramatically, with some 86 percent of Fortune 500 firms banning discrimination on the basis of sexual orientation — up from 61 percent in 2002.

This change, argued The Economist blogger, comes not only from LGBT activism but because of changing attitudes in society at large. And the rewards are tangible: LGBT-friendly workplaces are more competitive and retain the 5 percent to 10 percent more gay employees than their non LGBT-friendly counterparts. They also attract more LGBT customers, and that's good for business. Gay Americans, for example, spend $835 billion per year.

The change process is far from over, and today's younger workers are far more relaxed about homosexuality than their parents were. Indeed, many straights would feel uncomfortable working for a firm that failed to treat gays decently, and companies vying to recruit them will certainly bear this in mind.

RE Pride in Philadelphia

In July, Elsevier's Philadelphia office teamed up with their LexisNexis colleagues to form RE Pride, based on a partnership with the Independence Business Alliance, the Philadelphia chapter of the LGBT Chamber of Commerce.

They also work closely with their head of Human Resources, who leads the company's diversity and inclusion campaign.

In February, RE Pride sponsored 10 members to attend the annual Human Rights Campaign dinner in Philadelphia. They are also working with a local charity called Foyer of Philadelphia, which provides a drop-in service for LGBT teens ages 18 to 22 who were previously in foster care and are now essentially homeless, helping them find a job, school or training. They held a collection drive in the office for items as snacks, toiletries and other daily essentials, and this month, they will hold a poker tournament to raise money for Foyer. In addition, they are planning events such as Gay Bingo and Dining Out for Life to raise money for HIV/AIDS research.

"There definitely is a momentum behind the pride groups in building a presence globally," said Christopher Whibley, an executive assistant for the Information Security Data Protection Team who started the Philadelphia initiative at Elsevier. "Our next goal is to reach out to other offices in the US to see if there is an interest in forming a local Pride committee in their locations as well. It would be great to see our committee in every office."

"The time has come for groups like this," said Monika Kruemmling, Senior Web Producer for Elsevier's Electronic Production Journals group, who works with Whibley as co-chair of RE Pride. "There is a cultural pressure that is happening around LGBT issues, and there is a lack of awareness that is being addressed all at once in our culture. "I've been lucky at Elsevier; I've only had two bosses here, and they've both been pretty accepting. But I think there is still a lot of work to be done in your average workplace for it to be more comfortable and less threatening to gay people. Gone are the days when you'll hear sexist jokes in the workplace, but you will still hear gay jokes.

"A lot of gay people have spent years talking to coworkers about their straight relationships while being gender-neutral about their own," she added, explaining that some are reluctant to be seen as gay in the workplace. "People are concerned it will affect their future."

Whibley described RE Pride as "a very diverse group of men and women of all colors and backgrounds — LGBT and straight allies as well."

One of their "straight allies" is David Cass, Senior VP and Chief Information Security Officer for Elsevier, who serves as the group's Executive Chairman. "I think it's important, regardless of one's orientation, to support efforts like this," he said. "It encourages openness and diversity and enables us to contribute not only to Elsevier but to the greater Philadelphia community as well."

He said it also enables them to raise Elsevier's profile with the local Chamber of Commerce "by showing not only that we contribute and give back, but to highlight that Elsevier is a very open and welcoming community." 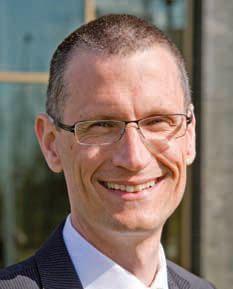 As Senior VP of Global Academic Relations for Elsevier, Dr. Michiel Kolman heads a global team dedicated to engaging in dialogue with key stakeholders in the academic community in Europe, Asia and North America: academies of science, research councils and university leaders. Since joining Elsevier in 1995, he has served in a range of publishing positions, including Publishing Director, during which he launched one of the first online journals in the industry: New Astronomy.

Dr. Kolman was Managing Director of the Elsevier office in Frankfurt, Germany, for four years, during which the coveted Beilstein database was acquired by Elsevier. Prior to Elsevier, he worked for Kluwer Academic Publishers (now part of Springer). He holds an undergraduate degree from Leiden University in the Netherlands and a PhD in astrophysics from Columbia University in New York, where he was a Fulbright scholar. As a 20-year veteran of the publishing industry who has worked on behalf of scientists and health professionals in developing nations through Research4Life, he was elected to the Executive Committee of the International Publishers Association (IPA) in 2010.

Thanks for a very interesting article.

This is very pertinent to me as I am currently writing my thesis on the impact of effective diversity management on employees’ indicators of well-being such as job satisfaction, stress, anxiety and a sense of belonging. My research shows that LGBT employees are more likely to disclose their sexual orientation when workplaces are supportive of diversity. Individual benefits of a supportive organisation and disclosure include positive employee job satisfaction, affective organisational commitment, perceived top management support and the ability for LGBT employees to develop more positive relationships with colleagues.

For organisations, it has been recognised in literature that the support for diversity is not only the right thing to do, but that it also makes good business sense. Benefits include the development of a creative and innovation workforce (research by Richard Florida has shown a strong correlation between US cites classed as both creative and LGBT hubs, with US cities that succeed in the technology sector tending to have large and visible gay and lesbian communities), attracting and retaining talent, increasing employee commitment and aligning employee and customer’s demographics. In addition, if discrimination is allowed to persist it has the potential to impact the wider organisation; it is disruptive, results in low productivity and high absenteeism and attrition. Making diversity awareness and management a priority sends a signal to all employees that diversity is welcome and desired by the organisation, it will also go some way to tackling discrimination and harassment.

Therefore I am very proud to work at Elsevier, who is making diversity awareness and management a priority. It makes our company a far richer environment and inclusive company.

This was a joy to read and made me even prouder to be an ELSEVIER author. It is proven time and again that diversity and encouragement across all boundaries leads to individual, national and global success.

"Straight Allies" . . . I like the term and see a version of it being possible with gender diversity and the initiative IPENZ in New Zealand is spearheading http://pamelamccauleybush.com/stem-professional/career-strategy/walk-the-talk/ Bravo ELSEVIER!

Dr. Bush, thank you for your comments. It is always great to hear from our authors. The Pride Groups make a positive contribution to our organization and reinforce the fact that we live our values at Elsevier and truly value our people.