Although healthcare workers' hands are the main source of bacterial transmission in hospitals, physicians' stethoscopes appear to play a role. To explore this question, investigators at the University of Geneva Hospitals assessed the level of bacterial contamination on physicians' hands and stethoscopes following a single physical examination. The study appears in the March issue of Mayo Clinic Proceedings, published by Elsevier. 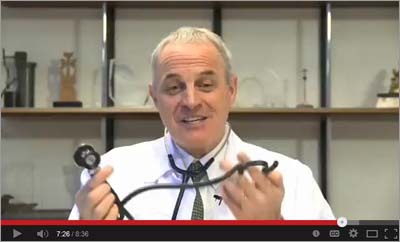 "By considering that stethoscopes are used repeatedly over the course of a day, come directly into contact with patients' skin, and may harbor several thousands of bacteria (including MRSA) collected during a previous physical examination, we consider them as potentially significant vectors of transmission," said lead investigator Dr. Didier Pittet, Director of the Infection Control Program and WHO Collaborating Centre on Patient Safety at the University of Geneva Hospitals. "From infection control and patient safety perspectives, the stethoscope should be regarded as an extension of the physician's hands and be disinfected after every patient contact."

In this study, 71 patients were examined by one of three physicians using sterile gloves and a sterile stethoscope. After they completed the examination, two parts of the stethoscope (the tube and diaphragm) and four regions of the physician's hands (back, fingertips, and thenar and hypothenar eminences) were measured for the total number of bacteria present.

The flagship journal of Mayo Clinic and one of the premier peer-reviewed clinical journals in general medicine, Mayo Clinic Proceedings is among the most widely read and highly cited scientific publications for physicians, with a circulation of approximately 125,000. While the journal is sponsored by the Mayo Clinic, it welcomes submissions from authors worldwide, publishing articles that focus on clinical medicine and support the professional and educational needs of its readers. The journal is published by Elsevier.