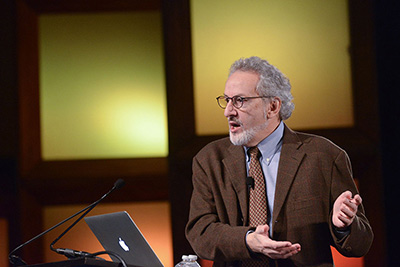 Recent work at Harvard’s Wyss Institute for Biologically Inspired Engineering, where Dr. Ingber is Founding Director, suggests the chips respond to drugs like human organs do – and have the potential to replace animal testing for safety and efficacy early in the drug-development process.

In his keynote address at the 2015 annual conference of the Society for Laboratory Automation and Screening in Washington, DC, last month, Dr. Ingber said his group has more than a dozen functioning organ chips In various stages of development and is now attempting to create a “human body on chips,” providing windows into normal functioning as well as disease.

A new model for drug development

In his keynote address at SLAS2015, Dr. Donald Ingber told the audience why he thinks drug development is failing:

When Dr. Ingber founded the Wyss Institute in 2009, “the biggest challenge I could see was that the current drug-development model is broken,” he said. While computer power is growing more and more, drug development is yielding less and less. Moore’s Law states that computer power doubles about every 18 months, he said, whereas “Eroom’s Law” (Moore’s Law backwards) states that “the number of new medicines halvesevery nine years,” despite an “astronomical” increase in research funding from government and industry. This situation exists in large part because the traditional journey from drug discovery to drug development takes place mainly in cell-culture dishes and animals, so new compounds are tested on cells that don’t function like those in the human body.

The result? About 85% of therapies fail in early clinical trials — and of those that make it to Phase III, generally the last step before regulatory approval, only half are actually approved.

“Less drugs are getting to patients, more companies are getting frustrated and it’s clear that we need better lab models that mimic whole organ function,” Dr. Ingber said.

Enter organs-on-chips – devices the size of a computer memory stick that contain human cells immersed in the blood vessels and tissue that normally form living organs. Because the environment of each organ chip is so similar to that of the human body, some (and more to come) actually function the way the human organ does. One example is the lung-on-a chip, which was engineered to “breathe” using air pumps to continually stretch and release the lung cells while fluid flows past through is vascular compartment like blood, as in this video:

The lung-on-a-chip is a microdevice the size of a memory stick that has the potential to replace animals for testing of drugs and toxins. This video shows how the device works and how it was used to mimic pulmonary edema.

This was followed by the creation of a disease model: pulmonary edema (water on the lungs) induced by drug toxicity — a condition that sometimes occurs in cancer patients being treated with Interleukin-2. Subsequent work with the on-chip disease model revealed the mechanism behind the condition and led to the identification of potential new therapies. 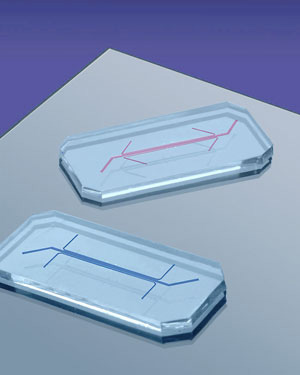 From there, the group has gone on to create an array of organs-on-chips and disease models, which are in various stages of development. These include a small airway chip, complete with beating cilia; a model of chronic obstructive pulmonary disease and its exacerbations; human gut chip that experiences peristalsis-like deformations, and can be used to inflammatory bowel diseases; a model kidney that mimics drug toxicities; a bone marrow-on-a-chip; and a human blood-brain-barrier-on-chip.

The idea is not to recreate an entire organ; it’s to reconstitute the smallest possible functional unit of an organ in a microenvironment similar to that of the human body, Dr. Ingber explained. These tiny organs-on-chips ultimately could be used in various stages of drug development, for example, to determine whether a particular protein might be a suitable target for drug discovery. In later testing, the chips could be used instead of animals to assess and predict whether a candidate drug might be toxic or efficacious.

Ongoing projects at the Wyss Institute include developing working models of the:

Dr. Ingber acknowledges that organ-on-chip technology is “still in its infancy,” but his group is making rapid progress. In 2012, the Defense Advanced Research Projects Agency (DARPA) challenged the group, and provided funding, to create 10 different organ chips, keep them alive and functional for one month on an automated instrument, and demonstrate physiological responses that mimic how functionally linked organs respond to drugs in the human body. Dr. Ingber’s group met and surpassed the first-year milestone by maintaining 12 organ chips — six  lung and six liver – on their instrument for one week, and by showing that they exhibit physiological coupling. They put the antibiotic rifampicin into the air channels of the lung chips and showed that the drug crossed the channels and was transferred to the liver chips. There, it induced the enzyme CYP3A4, the same enzyme that plays a key role in drug metabolism by the liver in the human body, and that can lead to dangerous drug-drug interactions.

At about the same time, drug companies said they also wanted organ chips, but ones that mimicked disease, so they could use them in drug discovery research. So Dr. Ingber’s group started working on a “Interrogator,” an automated instrument that could hold cartridges containing specific types of organ chips, as well as parts — machine connections, rotary pump interfaces, fluid channels and bubble traps — that can be used to link multiple organs together.  The instrument permits fluorescence and phase contrast imaging of cell physiology, can be easily integrated with robotic sample handlers and other equipment used by pharmaceutical researchers, and can be operated by remote control.

In July 2014, through a licensing agreement with Harvard’s Office of Technology Development, Dr. Ingber and colleagues Dr. Geraldine Hamiltonand James Coon launched Emulate Inc. to commercialize the organs-on-chips platform. In addition to pursuing applications in drug discovery, the company’s projects will include making personalized organs-on-chips from tissues of specific patients, as well as from genetic subpopulations. These chips could then be used to make drugs tailored specifically to them, Ingber explained.

“To go from bio-inspiration to innovation requires quite a bit of perspiration,” as well as collaboration “from every possible discipline,” Dr. Ingber concluded. “You really need to break down those boundaries to do something like this.”

Dr. Donald Ingber is a founder of the emerging field of biologically inspired engineering, and at the Wyss Institute, he oversees a multifaceted effort to identify the mechanisms that living organisms use to self-assemble from molecules and cells, and to apply these design principles to develop advanced materials and devices for healthcare and to improve sustainability. He has authored more than 400 publications and 95 patents, including chapters in Principles of Tissue Engineering, 4th Edition (Elsevier 2013), and Stem Cell Biology and Tissue Engineering in Dental Sciences (Elsevier 2014).