Over their lifetime, half of uncircumcised males will contract an adverse medical condition caused by their foreskin, researchers say 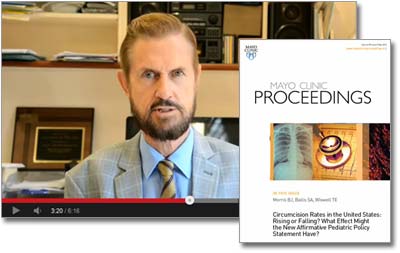 The health benefits of infant male circumcision exceed the risks by over 100 to 1, according to a new study just published online in Mayo Clinic Proceedings.

Dr. Brian Morris, Professor Emeritus in the School of Medical Sciences at the University of Sydney, and his colleagues in the United States found that over their lifetime, half of uncircumcised males will contract an adverse medical condition caused by their foreskin.

The findings add considerable weight to the latest American Academy of Pediatrics policy that supports education and access for infant male circumcision.

In the US, the rate of circumcision in men has increased to 81 percent over the past decade. However, while circumcision rates have risen in white men to 91 percent, in black men to 76 percent, and in Hispanic men to 44 percent, the study authors found an alarming decrease in infants. To get the true figures, they had to correct hospital discharge data for under-reporting. This showed that circumcision had declined from a high of 83 percent in the 1960s to 77 percent today.

There seemed to be two major reasons for the fall.

The new findings show that infant circumcision should be regarded as equivalent to childhood vaccination and that as such it would be unethical not to routinely offer parents circumcision for their baby boy. Delay puts the child's health at risk and will usually mean it will never happen.

In infancy, the strongest immediate benefit is protection against urinary tract infections (UTIs) that can damage the kidney in half of babies who get a UTI. Dr. Morris and co-investigator Dr. Tom Wiswell of the Center for Neonatal Care in Orlando, Florida, showed last year that over the lifetime UTIs affect one in three uncircumcised males.

Previously, In a landmark systematic review in the Journal of Sexual Medicine, Dr. Morris, with John Krieger, MD, of the Department of Urology at the University of Washington, Seattle, found that there is no adverse effect of circumcision on sexual function, sensitivity, or pleasure. "This helped dispel one myth perpetuated by opponents of the procedure," Dr. Morris said.

Based on these studies, Dr. Morris is calling for professionals in health, education and government to promote the circumcision of male infants and increase access for low-income families:

Taken together, the new findings should send a strong message to medical practitioners, professional bodies, educators, policy makers, governments, and insurers to promote this safe, simple procedure, best done in infancy under local anesthesia and to increase access and third party coverage, especially for poor families, who tend to suffer most from foreskin-related diseases. Infant circumcision has, moreover, been shown to be cost saving.

The flagship journal of the Mayo Clinic and one of the premier peer-reviewed clinical journals in general medicine, Mayo Clinic Proceedings is among the most widely read and highly cited scientific publications for physicians, with a circulation of approximately 125,000. While the journal is sponsored by the Mayo Clinic, it welcomes submissions from authors worldwide, publishing articles that focus on clinical medicine and support the professional and educational needs of its readers.

Rachel Gleeson is Media and Public Relations Adviser for Medicine, Nursing, Pharmacy and Dentistry  at the University of Sydney in Australia.

This is not true at all! &quot;Half of all males will have foreskin problems&quot; - so why aren't we hearing about this in England and other countries where the practice is scarcer? Another attempt to fleece over the public - and the author is not a urologist nor a medical doctor!

Who is Brian Morris, and why should his word be taken over the most respected medical organizations in the West?

One should question why MAYO decided to publish the ramblings of someone who has not a single credential in the fields he pretends to publish in. What is published here goes against what the most respected medical organizations say.

The credibility of MAYO must now be put into question.

You're using Brian Morris as a source? Seriously?

Here's some info on Morris that I'm fairly certain you're unaware of:

Additionally, in response to this latest attempt by Morris to justify genital mutilation:

If this crazy guy's claims were true, then all of Europe, China, Japan and Russia would have a serious health crisis on their hands from all the men whose parents didn't circumcise them at birth. The real world statistics contradict all of these claims.

The national medical organizations of several countries disagree with both Professor Morris and the AAP:

&quot;Circumcision is a 'non-therapeutic' procedure, which means it is not medically necessary.&quot;

&quot;After reviewing the scientific evidence for and against circumcision, the CPS does not recommend routine circumcision for newborn boys. Many paediatricians no longer perform circumcisions.&quot;

&quot;After reviewing the currently available evidence, the RACP believes that the frequency of diseases modifiable by circumcision, the level of protection offered by circumcision and the complication rates of circumcision do not warrant routine infant circumcision in Australia and New Zealand.&quot;

(almost all the men responsible for this statement will be circumcised themselves, as the male circumcision rate in Australia in 1950 was about 90%. &quot;Routine&quot; circumcision is now *banned* in public hospitals in Australia.)

&quot;to circumcise for therapeutic reasons where medical research has shown other techniques to be at least as effective and less invasive would be unethical and inappropriate.&quot;

&quot;The official viewpoint of KNMG and other related medical/scientific organisations is that non-therapeutic circumcision of male minors is a violation of children's rights to autonomy and physical integrity.&quot;

&quot;[30 September 2013] - At a meeting today in Oslo, the children's ombudspersons from the five Nordic countries (Sweden, Norway, Finland, Denmark, and Iceland), and the children's spokesperson from Greenland, in addition to representatives of associations of Nordic paediatricians and pediatric surgeons, have agreed to work with their respective national governments to achieve a ban on non-therapeutic circumcision of underage boys.&quot;

(very long, but very much against circumcision, and includes the following)

&quot;Therefore it is not understandable that circumcision of boys should be allowed but that of girls prohibited worldwide. Male circumcision is basically comparable with FGM types Ia and Ib that the Schafi Islamic school of law supports&quot;

&quot;The other claimed health benefits, including protection against HIV/AIDS, genital herpes, genital warts, and penile cancer, are questionable, weak, and likely to have little public health relevance in a Western context, and they do not represent compelling reasons for surgery before boys are old enough to decide for themselves.&quot;

(written in direct response to the AAP's position statement, and signed by 38 senior physicians, about half of them presidents or chairs of national paediatric or urological organisations).

All countries in the world allow Circumcision and male infant circumcision procedure .

WHO and UNAIDS announce recommendations from expert consultation on male circumcision . MALE circumcision being promoted in the world to help prevent HIV infection.

health benefits of circumcision include the following:

Protection against HIV and AIDS / Human immunodeficiency virus (HIV) was reduced by 53% to 60%.

Lower risk of getting cancer of the penis, a rare type of cancer.

Prostate Risk Is Lower After Circumcision

Cancer of the cervix in women is due to the Human Papilloma Virus / Human papillomavirus (HPV) was reduced by 32% to 35%.

Prevention of phimosis, a painful condition in which the foreskin retracts. Circumcised males do not get this condition.

New Evidence Points to Greater Benefits of Infant Circumcision, But Final Say is Still Up to Parents, Says AAP

ROME - MALE circumcision, an operation being promoted in Africa to help prevent HIV infection, boosts men's sexual pleasure, according to a study presented at the conference on Aids medicine winding up here on Wednesday

Study: Circumcision does not dull sensation / McGill researchers using the latest technology may have finally debunked the enduring belief that circumcised men experience reduced sexual sensation compared to those who are uncircumcised.

sensitivity as men who are uncircumcised, a new study suggests

New Study Suggests Male Foreskin is a Reservoir for HPV; May Have Implications for Vaccinations and Circumcisions

The article, “Circumcision Rates in the United States: Rising or Falling? What Effect Might the New Affirmative Pediatric Policy Statement Have?” was authored by 3 experts in the subject matter. All 3 have previously authored numerous scientific articles on this topic, and their combined credentials are far more than adequate to allow them to authoritatively address the topic.

Once submitted to Mayo Clinic Proceedings, the aforementioned manuscript was rigorously peer reviewed by other experts in the field, revised, and later accepted for publication. The Journal’s Editorial Board oversaw this process. All of these are typical processes for the review and acceptance of a manuscript. As a result of these processes, the approved manuscript was deemed to provide solid scientific information and appropriate speculative synthesis on the subject matter.

Formal comments regarding this article and other materials published in Mayo Clinic Proceedings should be directed to the journal, in the form of a Letter to the Editor. That communication should be submitted through the journal’s manuscript management portal, http://mc.manuscriptcentral.com/mayoclinproc . There, those wishing to comment will find instructions on the allowable content and other guidelines for formulating a Letter to the Editor. The comments within the Letters must be restricted to the scientific matter under investigation, and will be evaluated by a peer-review process to determine their educational and clinical value to the general/internal medicine readership of the Proceedings. In general, only 15% to 20% of all submissions to the journal are eventually accepted for publication. Ad hominem attacks on the authors, the Journal, or its sponsoring institution, Mayo Clinic, will not be permitted in any published Letters. Further, any letters eventually accepted for publication will be accompanied by a published response from the authors.

The report about the 6% drop is in error. The present rate for infant circumcision in the US is about 55%. Perhaps the error was in describing the circumcision PREVELANCE in the adult population as the INCIDENCE in the infant population.