Children born in summer are more likely to be healthy adults

Chidren who were born in the summer are more likely to be healthy adults, suggests new research published in the journal Heliyon. The authors of the study, which involved almost half a million people in the UK, say more sunlight – and therefore higher vitamin D exposure – in the second trimester of pregnancy could explain the effect, but more research is needed. 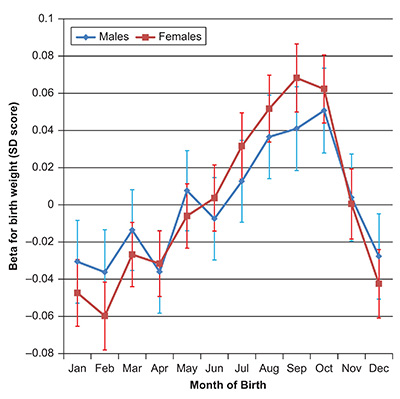 According to the study, birth month affects birth weight and when the girl starts puberty, both of which have an impact on overall health of adults.

The environment in the womb leads to differences in early life – including before birth – that can influence health in later life. This effect, called programming, has consequences for development throughout childhood and into adulthood.

The researchers behind the new study, from the Medical Research Council (MRC) Epidemiology Unit, University of Cambridge, UK, looked at whether birth month had an effect on birth weight, onset of puberty, and adult height. They found that children who were born in the summer were slightly heavier at birth and taller as adults and went through puberty slightly later than those born in winter months.

“When you were conceived and born occurs largely ‘at random’ – it’s not affected by social class, your parents’ ages or their health,” said lead author Dr. John Perry. “So looking for patterns with birth month is a powerful study design to identify influences of the environment before birth.” 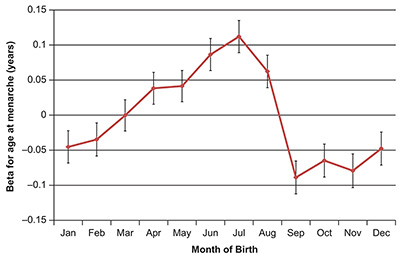 Previous studies have reported certain effects of the season of birth, for example on birth weight and various other health outcomes. Dr. Perry and the team thought that childhood growth and development, including the timing of puberty, is an important link between early life and later health, so decided to study more closely the impact of birth month.

The researchers compared the growth and development of around 450,000 men and women from the UK Biobank study, a major national health resource that provides data on UK volunteers to shed light on the development of diseases. 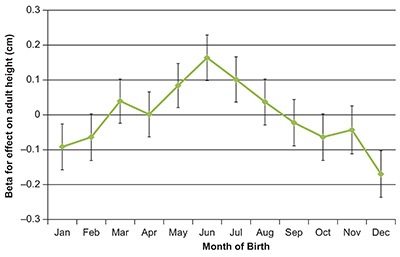 The results reveal that babies born in June, July and August were heavier at birth and taller as adults. For the first time, the study also revealed that girls born in the summer started puberty later – an indication of better health in adult life.

“This is the first time puberty timing has been robustly linked to seasonality,” said Dr. Perry. “We were surprised, and pleased, to see how similar the patterns were on birth weight and puberty timing. Our results show that birth month has a measurable effect on development and health, but more work is needed to understand the mechanisms behind this effect.”

The researchers believe that the differences between babies born in summer and winter months could be down to how much sunlight the mother gets during pregnancy, since that in part determines her vitamin D exposure.

“We don’t know the mechanisms that cause these season-of-birth patterns on birth weight, height, and puberty timing,” said Dr. Perry. “We need to understand these mechanisms before our findings can be translated into health benefits. We think that vitamin D exposure is important, and our findings will hopefully encourage other research on the long-term effects of early life vitamin D on puberty timing and health.”

Heliyon, published by Elsevier, is a fully open access journal that publishes robust research across all disciplines. The editorial board consists of over 600 active researchers who access papers on their merit, validity, and strength of technical and ethical soundness. Read more.

After a few accidents, Lucy Goodchild van Hilten discovered that she’s a much better writer than a scientist. Following an MSc in the History of Science, Medicine and Technology at Imperial  College London, she became Assistant Editor of Microbiology Today. A stint in the press office at Imperial saw her stories on the front pages, and she moved to Amsterdam to work at Elsevier as Senior Marketing Communications Manager for Life Sciences. She’s now a freelance writer at Tell Lucy. Tweet her @LucyGoodchild.