By Lucy Goodchild van Hilten - August 3, 2020  10 mins
Dr. Diego Casado-Mansilla, a Research Associate at the University of Deusto in Spain, and PhD candidate Ane Irizar-Arrieta work with Oihane Kamara on developing technology that people connect with to act more sustainably

Each month, the Elsevier Atlas Award recognizes research that could significantly impact people's lives around the world. The June award goes to two groups:

Lights that switch on and off automatically so we don’t have to remember to do it ourselves. Devices that activate low power or standby mode when we’re not using them. Smart showers that regulate water flow, smart thermostats that control the temperature of your home, smart windows that keep your building energy efficient.

Technology can provide effective solutions to many environmental problems, including by reducing energy use.

While solutions like these appear to improve energy efficiency, they rarely take into account our role in the equation – how humans behave. Yet behavior change is a powerful way to reduce energy consumption, both when using a device and in other contexts.

In their Atlas Award-winning paper in the International Journal of Human-Computer Studies, an interdisciplinary team of researchers from the University of Deusto in Spain share a set of design hypotheses that provide a framework for creating devices that humans interact with to reduce their energy footprint.

“We always assume technology will help improve energy efficiency,” Dr. Diego Casado-Mansilla said. “But while we want to create comfort for the users, forgetting human factors could actually decrease efficiency. We think that human pains, perspectives, needs and beliefs should be put at the center of the design of the pieces of technology that we create.”

PhD candidate Ane Irizar-Arrieta added: “For us, the responsibility is on the human side, but also in the technology – they work as a team to improve environmental impact.”

The power of the persuasive coffee machine

Diego and the team were interested in understanding the effectiveness of different technological solutions in the workplace environment, where we have less insight and control over energy use. The studies they found in the literature were short-term and didn’t provide the in-depth information they needed, so they embarked on a year-long experiment comparing three different approaches to improve the energy efficiency of a coffee machine.

The first device was a coffee machine altered to give persuasive feedback – to tell users when they should switch it off or leave it on, based on usage patterns. The second was a system for energy monitoring through a dashboard online, so users could see the energy use in real time. The third was a fully automated coffee machine that switched itself off so users would not have to remember to do it.

The results showed clearly that the persuasive device was more effective than the other two solutions, reducing energy waste by 45 percent, compared to 14 percent for the automated machine and negligible change for the dashboard. Taking the effort out of environmentally responsible behavior appears not be the most effective approach.

“We created some sort of friction, some sort of feeling in the people that they are responsible for their actions in favor of the environment,” Irizar-Arrieta said. “This is what we really think makes a change.”

A framework for designing solutions with friction

Armed with the data from the three types of coffee machines, the team carried out focus group discussions with the users to understand the wider impacts of the devices. Using an approach called Grounded Theory analysis, they came up with five themes that act as a framework for people designing persuasive technologies to reduce energy consumption: interaction, mediator/emotion, attachment/confidence, use context, and behavior.

Five themes to consider when designing technology to reduce energy use 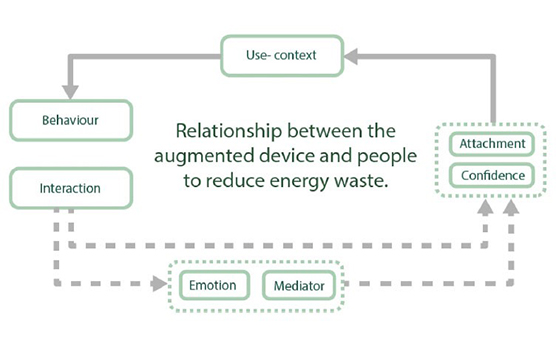 The emerging theory obtained by analyzing the qualitative data through Grounded Theory. (Figure originally published in the International Journal of Human-Computer Studies, reproduced here with permission

To test the framework, the team applied the five themes to the design of an interactive coaster that shows visually the energy consumption of the user’s workspace, with the aim of promoting more energy-conscious behavior.

The interactive coaster has LED light rings that show energy consumption using a traffic light approach – green is low, red is over the user’s average consumption. The design followed the five themes the team established in the first experiment.

“We thought about how to personalize the coaster to improve this idea of attachment, of the emotional side of developing and owning the technology,” Ane said. “For us, owning this small product is like building a link between you and the technology.”

The interactive coaster was more effective than they had expected. Having a simple device as a visual reminder to act responsibly to reduce energy use was highly effective in the shared workspace, and also showed positive spillover in other contexts: the team received several requests to take the coasters home with them.

“This is interesting because it suggests we can develop technology for one context and see the behavior extrapolated to other contexts,” Diego said.

“It seems quite hard to make the big change we need right now,” Ane added. “But it’s why as researchers, we should set the basis and show the companies that it is possible to grow economically and also make a positive impact on society and the environment. For me, these are not opposite ways of thinking.”

Read more about the team’s work

In conversation with the researchers

I spoke to two of the authors of the study, Dr. Diego Casado Mansilla and Ane Irizar-Arrieta, about designing devices to promote more sustainable behavior. 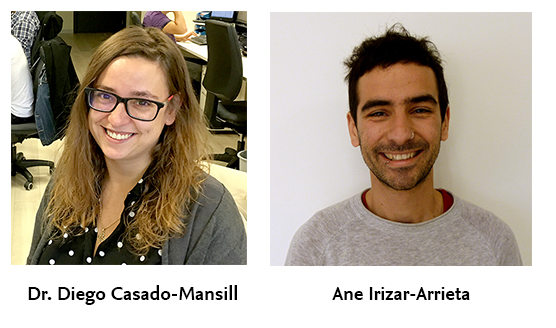 Listen to the interview

Why is it important to include the human element when you're developing solutions for energy use?

Diego: We are very used to to hearing that technology will save the world, that technology really mediates our life, that with our technology we'll do all the things that human beings cannot really do. We have an opposing opinion here: we think that human pains, perspectives, needs and beliefs can be put at the center of the design of the pieces of technology that we create.

Ane: We firmly believe that we should address technological development in thinking not only about the human side, but addressing human improvement and development.

What did you aim to do with your paper in International Journal of Human Computer Studies?

Diego: We think that technology mediates relationships between people. We think that the paper can serve for designers, engineers, people who are really great in technology, to take human factors into account when they create technology.

Ane: We wanted to grasp the idea, this more theoretical approach, and then understand how to apply it – to bridge these two worlds of theory and practical implementation.

What were your findings from the field study?

Diego: We were very focused on the persuasive device, but actually we found out some side effects of the automated technology. When people were were not able to manipulate and to operate the coffee machine, they didn't trust the technology as a means to solve all environmental issues.

It seems like the devices can teach humans how to be more conscious.

Diego: When we provided the persuasive coffeemaker, we created some sort of friction, a feeling in people that they are responsible for their actions in favor of the environment. This is what we really think makes a change. There were also spillover effects – actions that people do out of the context where they interact with the technology. This suggests we can develop technology for one context, and the behavior can be extrapolated to other contexts.

Ane: We found that just by providing this friction, the individuals were more aware and more conscious about about their actions. And that for us is important, because in a shared space like the workplace, things like energy costs are managed by third parties, so we really don't see the needs or the expenditure.

What was the interactive coaster?

Diego: The idea of the coaster was to provide feedback to the user about their everyday actions in real time, through their energy consumption. Having something that simply reminds you to do an action was even more effective than we were thinking. We observed that the this kind of technological artifact can make a difference to the behavior – the technology can teach and help people to learn how to use better their everyday devices.

You were aiming to come up with design hypotheses for devices, including attachment. What was the idea behind this?

Diego: We found that people were very attached to the coffeemaker; when we went to take back the intervention after one year, the people didn't want us to remove the features provided for the coffee makers. It was very simple, just some messages, some feedback; it was so simple that we were surprised by the attachment, that people really thought it was something meaningful for them – they didn't want us to dismantle the intervention after the work.

Is this something that you think can just be implemented now?

Ane: It seems quite hard to make the big change we need right now. But it's why as researchers, we should set the basis and show the companies that this is possible – it is possible to grow economically and also make a positive impact on society and the environment. For me, these are not opposite ways of thinking.

About the International Journal of Human-Computer Studies

The International Journal of Human-Computer Studies publishes research relevant to the theory and practice of innovative interactive systems. The journal is inherently interdisciplinary, covering research in computing, artificial intelligence, psychology, linguistics, communication, design, engineering, and social organization, which is relevant to the design, analysis, evaluation and application of innovative interactive systems.