Boston weather is variable now; in a warming future, runners may overheat and slow down

Recently, Boston University Biology Professor Richard Primack led a study titled "Effects of Warming Temperatures on Winning Times in the Boston Marathon," publishing the results in PLOS One. His co-authors were Dr. Abe Miller-Rushing, ecologist and Science Coordinator at Acadia National Park in Maine, and two fellow professors in the Earth & Environment Department: Dr. Nathan Phillips and Dr. Robert Kaufmann. Analyzing detailed data on weather and winning times, they projected that marathon winners of the future may be compromised by the heat and run slower than their predecessors.

Here, Dr. Primack – who ran the marathon as a college student – writes about their findings in advance of the 117th Boston Marathon on Monday. — Alison Bert, Editor-in-Chief

As a Professor of Biology at Boston University, Dr. Richard B. Primack studies the effects of climate change on the plants and animals of Massachusetts using the observations of Henry David Thoreau in the 1850s as a starting point. He is Editor-in-Chief of the Elsevier journal Biological Conservation and author of two widely used texbooks in conservation biology, which have been translated into 28 languages with local co-authors adding examples from their own countries. In 2011, he was awarded the Distinguished Service Award of the Society for Conservation Biology for this activity.[/note]

Since 1924, winning times for the Boston Marathon have become steadily faster with better training methods and a growing number of international runners. Various human and environmental factors work together to determine winning times, but one of the most important is race day temperature.

In a world already marked by the effects of a warming climate, we set out to investigate how these changes could affect the Boston Marathon – the world's longest continually held marathon. The idea for the project began seven years ago when Dr. Phillips suggested to Abe and I that we extend our climate change research from birds and plants to include how a warming climate would affect long-distance running.

The idea had particular appeal to me because I had run the 1970 Boston Marathon during my sophomore year in college, though my time of 3 hours and 56 minutes was not competitive. I ran the race on a cold day with a light drizzle, and my only goal had been to finish the race. I still watch the race every year from the start of Heartbreak Hill, a famous obstacle near the end of the Boston Marathon that ends the hopes of many runners.

Running times have long been known to be impacted by weather on the day of the race; a tail wind can give runners a boost, a unlucky head wind can slow them down, and rain and sleet can be as dampening to the spirits as they are to the pavement. Heat can have an especially dramatic effect on race times.

Last year in April 2012, when the temperature on race day fell just one degree short of the all-time high, the winning men's time was 9 minutes slower than it had been in the cool-weather race of 2011. Our analysis shows that winning times are, in fact, almost 2 minutes slower for every 10 ⁰F  (5.6 ⁰C) increase in temperature.The main reason that the heat so often beats runners is its adverse effects on the human body's capacity for regulating internal temperature. An eventual inability to control body heat by sweating alone leads to cramps, dehydration and heat exhaustion, and can sometimes even result in a runner's death. The idea that racers run slower in hot weather is neither surprising nor new — but what about the effects of global warming? 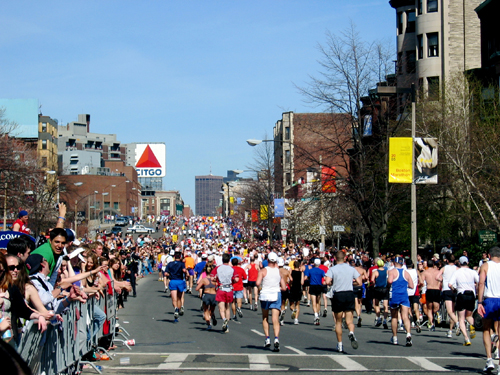 The city of Boston is now about 4 ⁰F (2 ⁰C) warmer on average in the spring than it was in the 1890s, when the Boston Marathon was first run, and about 3 ⁰F (1.5 ⁰C) warmer than in 1924, when the looping course that is still run today was first established. The rise is due to a combination of global warming and the urban heat island effect associated with large cities.

Despite this significant average increase, an enormous variation in seasonal and day-to-day temperatures in the Boston area has made it impossible to detect any overall warming on race day itself;  the temperature for the dangerously hot 2012 marathon, for example, was a brutal 89 ⁰F (32 ⁰C), but in 2011 it was a chilly 57 ⁰F (14 ⁰C). This fluctuation from year to year has kept the average temperature on race day relatively constant, and as a result, the warming climate has not yet been shown to affect winning times of the Boston Marathon. But it leaves the future of the race in question.

The potential for warming temperatures to affect marathon athletes depends on the magnitude of warming and year-to-year variation in daily temperatures. Our research team set out to estimate how race times will change if the average temperature in Boston continues to warm as predicted and still remains as variable day to day. We created a computer simulation using past winning times in combination with weather data from the nearby Blue Hill Meteorological Observatory, which has the longest continuous weather record in the United States. We considered factors such as temperature, wind direction, wind speed, humidity, wind chill, sky cover and precipitation. And we considered how each of these factors individually and combination would affect race times. 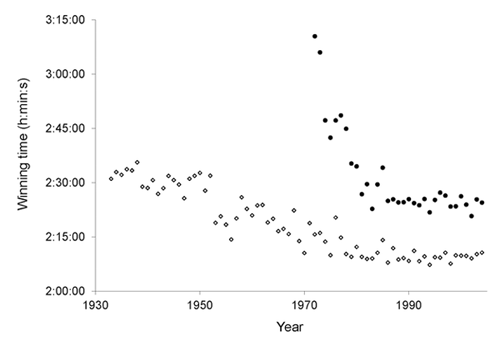 Winning times for the Boston Marathon for men (diamonds) and women (black dots) steadily improved until about 1990, when they leveled off. The improvement in women's running times was more dramatic due to a variety of factors, including more opportunities for running and a larger number of women running long distances.

Based on our model, if Boston temperatures were to continue to warm by 4.5 ⁰F (2.8 ⁰C) by the end of the century (a mid-range estimate for global warming), there will be a 64% chance that winning times will be slowed. If the average global warming is as high as 9.4 ⁰F (5.8 ⁰C) — a high-end model estimate of global warming — the probability of slower race times is as high as 95%. In such a future climate, the Boston Marathon would often be run on days that were hot enough to slow runners down. Though there would still be occasional years in which cool conditions would allow runners to achieve their best possible times.

The organization that manages the Boston Marathon, the Boston Athletic Association, has already made some effort to reduce the risk of heat exhaustion and dehydration. In 2007, the start time of the race was moved from noon to 10 a.m. in part to lessen runners' exposure to high afternoon temperatures. Race officials in the days leading up to the 2012 marathon suggested that neophyte runners put off their first race for a cooler year, but even the men's champion of the previous year, Geoffrey Mutai of Kenya, was forced to drop out entirely due to leg cramps.

For the 2013 race, organizers have even issued a booklet to all registered competitors titled "The Right Way to Hydrate for a Marathon," developed by the American Athletic Medical Association. Warmer races in the future may necessitate even more of these preventative measures.

Our team's research has much wider implications than just the slog up Heartbreak Hill. Endurance running will be especially hard hit by the predicted warmer climate, but higher temperatures could have dire consequences for the future of all warm-weather outdoor activities, including construction and farm work, team and endurance sports, and physical fitness training. People will increasingly have to avoid physical exertion during hot summer weather or risk exhaustion and even serious medical problems.

The next few decades will tell whether morning start times and heat warnings will be enough to keep winning marathon runners from slowing in a steadily warming world.

Meg Boeni, an undergraduate journalism student at Boston University, contributed to the writing of this article for Elsevier Connect.

The UK Met office and the IPCC have recently stated that there has been no warming for the past 16 years, so your article is based upon false information. Please correct or remove this incorrect article!

Contrary to this comment, the UK Met office has clearly stated that global warming is continuing and is a reality. Please read their statement for more details:

Other recent articles have discussed how climate models have become increasingly accurate and how past predictions of warming have been shown to be true: