Anti-vaccine posts are going ‘under the radar’ on Pinterest 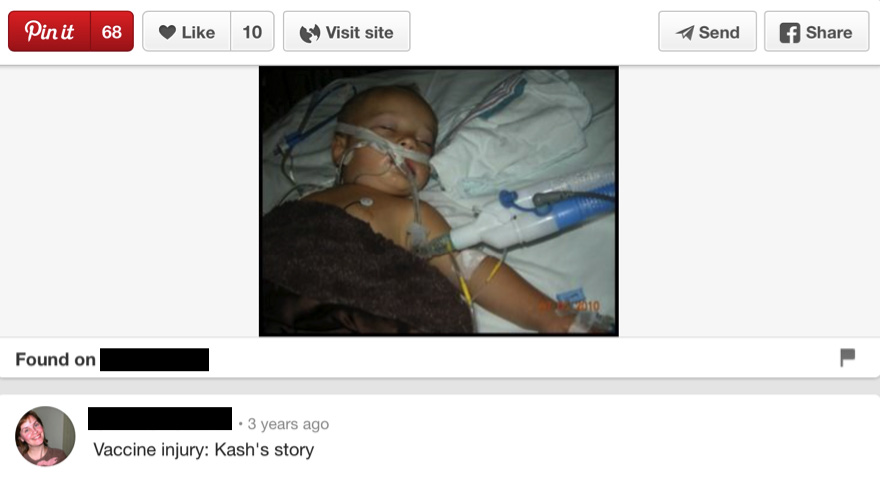 Log in to Pinterest, the visual social media site, and you’ll face a wall of topics you can choose from: gardening, weddings, books, running, Audrey Hepburn … The list is almost endless. You can scroll through thousands of posts on your chosen topics and “pin” the ones you find most interesting on your own virtual pinboards. It’s a great way to collect design and fashion ideas, recipes and gardening tips.

In a new study published in Vaccine, researchers from Virginia Commonwealth University in the US searched for vaccine-related pins on Pinterest and found hundreds of conversations going on “under the radar.” Their analysis revealed that 75 percent of the pins were negative towards vaccination, and the authors are now calling for better communication about vaccination. 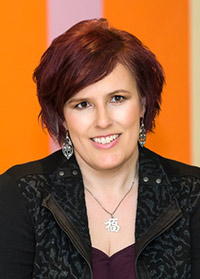 Despite this, relatively little is known about what people are saying about big issues like vaccination on visual platforms. Jeanine Guidry, lead author of the Pinterest study and PhD student in Social and Behavioral Sciences at Virginia Commonwealth University, explained: “With the academic publishing process being slow compared to the speed of social media, we tend to be a few years behind when platforms become popular.”

Guidry is an avid Pinterest user, so she decided to search for topics she was interested in, like vaccines and depression. She found there were subgroups of people talking about vaccines. She explained:

I love Pinterest – I use it to catalogue decorating ideas and recipes – so thought I’d search for things I’m interested in, like vaccines and depression. To my surprise, there are a lot of health discussions happening under the radar. 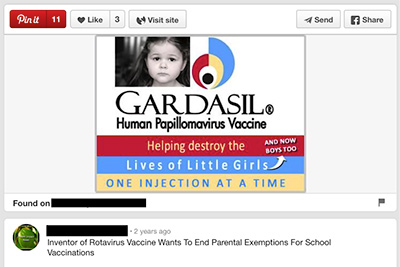 Guidry and her colleagues collected 800 pins and analyzed them to determine whether they are pro- or anti-vaccination. The sample was collected manually, as there is not yet a code to help collect pins using a hashtag or keyword.

The results revealed that 75 percent of all vaccine-related pins were negative. Messages ranged from simple posts questioning the safety of vaccines to more radical claims that vaccines are being created to kill people. 20 percent of the posts talked about conspiracy theories, such as pharmaceutical companies out to make money at the expense of children, and governments trying to harm children for the purposes of population control.

“These are real fears that people have; from a public health perspective, we need to talk to people about their fears,” Guidry said. “But first we need to know what’s happening. Up to this point we didn’t even know these conversations were taking place.”

The results show a significant shift from earlier studies: in the mid-2000s, analyses of content on MySpace and YouTube revealed that vaccine-related posts were negative just 25 percent of the time. Unfortunately, this is bad news for public health, and the pins didn’t make for easy reading, as Guidry said:

I tried to make sure I kept it in perspective, especially when people were using stories of their own children. It’s something very human. But these messages, as well as those by anti-vaccine organizations that spread fear, can do real harm.

Vaccines work on an individual level by protecting the person who has been vaccinated against a particular disease. They also work on a community level: if a certain percentage of the population is vaccinated against a disease, the community has what’s called “herd immunity.” This means people who can’t be vaccinated, such as children with leukemia, are also protected.

When organizations share anti-vaccine messages, the risk is that parents choose not to vaccinate their children out of fear. This lowers the overall vaccination rate and puts vulnerable people at risk of disease.

How do we become better advocates?

There’s a pressing need to improve vaccination rates globally: in 2015, there was a huge outbreak of measles in the US, which started at an amusement park. The number of new cases of whooping cough has also been increasing over the last decade. These are not unusual examples, and countries around the world are starting to see more cases of childhood diseases we thought were as good as gone.

To tackle this, Guidry calls for better communication around vaccines in her paper. But in a response letter published in Vaccine, researchers from Drexel University Dornsife School of Public Health say it’s time to take more concrete action: scientists need to speak out more effectively in favor of vaccines, and institutions need to support and encourage advocacy.

According to Dr. Neal Goldstein, now a research fellow in the Department of Pediatrics at Christiana Care Health System, the ongoing calls for better communication about vaccines aren’t having the desired effect – which is evident from the increase in anti-vaccine messages on social media in the past decade:

This isn’t a new topic – it’s been going on for some time now. It’s worthwhile to make the statement we need to do more, but we’re doing quite a bit; maybe people can’t hear the message because they’re being bombarded with scientific data. The question is how do we do better? How do we become better advocates for science in the public?

Dr. Goldstein believes it’s a systemic issue in which institutions play a vital role. Most public health programs don’t provide training on how to be an effective public health advocate or how to communicate well with a lay audience. Scientists are trained to write papers, present at conferences and get grants; the academic structure incentivizes that rather than advocacy. When institutions evaluate researchers for tenure or promotion, they favor publications rather than science-based advocacy in the press. This, says Dr. Goldstein, needs to change:

Some groups, such as parent-led advocacy groups and science writers who publish in the popular press, as well as a few notable physicians, are doing a great job of speaking out in favor of vaccines. But there’s not much going on in the pure research community – that’s what we want to change. For that to happen, institutions need to change their approach to advocacy too.

If you’re interested in joining the conversation, Dr. Goldstein suggests contacting your local newspaper to inquire about writing about this important issue or using social media to reach people online.

Elsevier has made the following article freely available until 16 April 2016:

Jeanine Guidry is a Ph.D. student in Social and Behavioral Sciences at Virginia Commonwealth University, as well as an affiliate graduate researcher at the Center for Media+Health. She earned her B.S. and M.S. in Health Sciences from Maastricht University in the Netherlands, and her M.P.S. in Strategic Public Relations from George Washington University. Her research agenda focuses on the use of social media and mobile technology in health communications. Her recent work includes the use of visual social media platforms like Instagram and Pinterest in the area of mHealth, eHealth and social media. She has recently presented her work at the International Communications Association (ICA) conference, the DC Health Communication (DCHC) conference and the American Public Health Association (APHA) conference. Additionally, her work has been published in Vaccine, the Journal of Social Marketing and Health Communication.

Dr. Neal D. Goldstein is an epidemiologist whose research spans several disciplines including vaccine-preventable infectious diseases, HIV, maternal and child health, and advanced epidemiological modeling. He also has a background in biomedical informatics with detailed knowledge of hardware and software in the healthcare domain. In his current role as a research fellow in the Department of Pediatrics at Christiana Care Health System, Neal works closely with residents, clinical fellows and attending physicians assisting in the design and analysis of clinical studies. Recently he has focused on translational epidemiology, or moving from knowledge generation to application and advocacy. Neal writes a science blog, and you can follow him on Twitter.

The official journal of The Edward Jenner Society, the International Society of Vaccines and The Japanese Society for Vaccinology, Vaccine is the pre-eminent journal for those interested in vaccines and vaccination. The journal covers a wide range of vaccine-related topics, including human and veterinary vaccines for infectious and non-infectious diseases, production and manufacturing, and regulatory, societal and legislation aspects.