For over 20 years, (Stephen) Hawking has been at the media's frontier, helping to define how scientists present themselves to the public and are represented by others. And just three weeks ago, at age 72, Hawking once again did something new. …

Carl Zimmer – one of four science journalists in the Engaging with Journalists session at the American Association for the Advancement of Science (AAAS) annual meeting – began the story he would use to illustrate dramatic changes that have taken place in science since they won the prestigious Kalvi Science Journalism Award.

Cornelia Dean, science writer on environmental issues at The New York Times and author of Am I Making Myself Clear? A Scientist's Guide to Talking to the Public, was the moderator.

The panelists were asked to speak about changes in science journalism and communication during the time they won their awards and beyond.[divider]

Carl Zimmer: 'a drastically new way for scientists to reach the public' 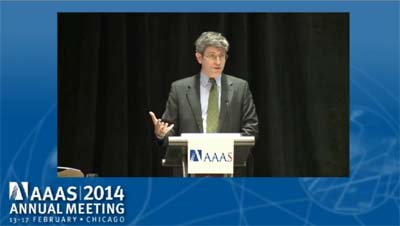 What Hawking did for the first time was to upload the paper "Information Preservation and Weather Forecasting for Black Holes" to the pre-print site arXiva. Two days later Nature and New Scientist did pieces on it. "These stories swiftly got a lot of attention on sites such as Digg and Facebook, driving hordes of readers their way," Zimmer said.

"To me, this episode epitomizes the huge changes in our field," he said. "I'm not saying the individual elements of this story are new. Physicists have given talks for centuries. ArXiva has been around for 23 years. By the early 2000s, people were blogging regularly about science. But recently these elements have crossed two thresholds – of scale and connection – and the result is a drastically new way for scientists to reach the public.

"What do these changes mean for people like the four of us on the panel–the journalists? A lot," he said.

It makes science journalism more fun. You don't have to sit dutifully by your computer, waiting for some journal to deign to let you know about a new paper. You can go hunting. You can turn up a new paper that's just sitting quietly in a pre-print archive, and share it with the world.

But it also presents new risks that we journalists should be mindful of. The scientist who tweets the most may not be the wisest expert on a particular topic. If you come across a preprint, you have to ask, "Does its mere existence constitute news?" Or is that preprint just a flakey idea that will never make it into a serious journal?

Should journalists wait for the journals to give these papers their seal of approval? Is that what journals are for now — to designate important science. I honestly don't have answers to those questions. But Stephen Hawking has made it clear to me that I need to find some. 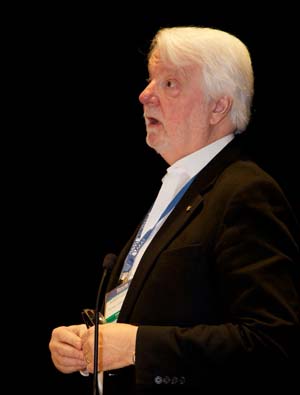 Hotz said he was there to offer "the perspective of a media survivor." Hotz, who won his first Kavi Award in 1977, said, "I have been transformed from an ink-stained wretch into a hard copy, online, iPad, blogging, podcasting, selfie-snapping, tweeting science journalist."

"Technology has not changed the science we report on, but has changed the time spent on packaging it and, as a side effect, our ability to make a living, which in turn has affected the quality, quality and reliability of science journalism," he said.

One result has been that the number of weekly science sections in US newspapers has plummeted from a high of 95 in the 1970s to 19 today, resulting in fewer science journalists covering fewer subjects.

And although there is more access to science news, there is less good reporting. He said 40 percent of news is devoted to sports, weather and traffic, leaving little room for science stories. And when science is featured in the news, it's often covered by people who are not science journalists.

Once in a while, however, science goes viral with the public, thanks to social media. He mentioned the 2012 landing of NASA's Curiosity rover on Mars, which sparked 1.2 billion Twitter messages, 17.4 million Facebook hits, and 36.4 million webcast streams."[divider] 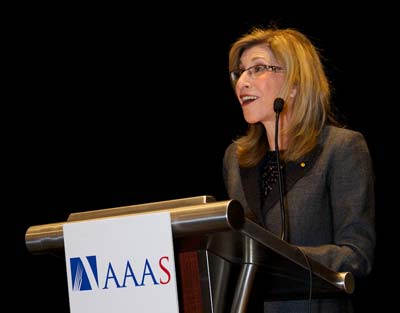 Apsell said that Nova is on 400 PBS networks and gets good ratings but that the show has changed.

"I cringe when I watch the old shows," she said. "The stories are so slow compared to today's shows. Our viewers want stories that move quickly and are visually exciting."

Apsell also noted that the online and television audiences are different.The online viewers tend to be younger.

"Our story on genetically modified foods drew huge online ratings, but I knew it would tank for our traditional TV audience," she said. "The new reality calls for us to ... tailor the way we tell stories to our different audiences."

For example, the online edition of Nova has podcasts and features such as Nova ScienceNOW, which has shorter stories and more videos. Other online features include the Making More Stuff Quiz and ScienceNOW, hosted by tech guru David Pogue, who recently left The New York TImes for Yahoo.

David Baron: Telling the story behind the science 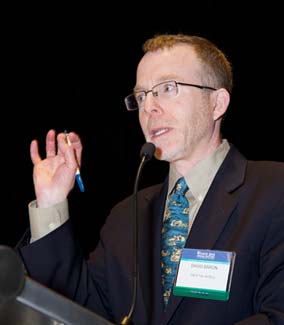 Baron said the biggest change he has witnessed is the shift from science reporting to storytelling: "Traditionally, science news on NPR was very straight forward. We would report on a journal study and perhaps have a short interview with a scientist. Today, the news is not presented in a linear fashion."

As an example of the new model, he cited RadioLab, broadcast on NPR, which bills itself as a show about curiosity "where sound illuminates ideas, and the boundaries blur between science, philosophy, and human experience."

[pullquote align="right"]"The story is upfront and often personal. The science is part of the story, not the lead."[/pullquote]

Baron, who is not part of the show, explained that "science stories today are not linear. The story is upfront and often personal. The science is part of the story, not the lead."

He gave an example of the new emphasis on narrative by telling the story of a reporter who set out to write about two American brothers and their desire bring renewable energy to people in remote communities in Nicaragua. "The brothers envisioned the electricity generated by windmills would be used by children to study at night in schools and by entrepreneurs to be more profitable," Baron said. "Instead they bought televisions. The brothers were both discouraged and depressed by the experience."

The story became what the brothers learned from this experience.

They learned that they went about this project wrong. They didn't ask the villagers what they wanted. They thought the answer was the technology. But to the villagers, electricity was not their first priority. They wanted clean water because their children were getting sick. They wanted better roads to get their goods to market.

And that was the story.

David Levine (@Dlloydlevine) is co-chairman of Science Writers in New York and a member the National Association of Science Writers (NASW) and the Association of Healthcare Journalists. He served as Director of Media Relations at the American Cancer Society and as Senior Director of Communications at the NYC Health and Hospitals Corp. He has written for Scientific American. The Los Angeles Times, Good Housekeeping, BioTechniques, Robotic Trends and Nautilus and was a contributing editor at Physician's Weekly for 10 years. He has a BA and MA from The Johns Hopkins University.

For an example of the new journalism, David Levine recommends Ed Yong's story "Here's What Happens Inside You When a Mosquito Bites."