Every year our STM Journals Marketing department organizes many events and campaigns thanking and recognizing the hard work of our reviewers. Some campaigns are across large numbers of journals whilst others are journal specific.  As we reach the end of 2013, our marketing department would like to share a few of the campaigns and events they carried out this year. 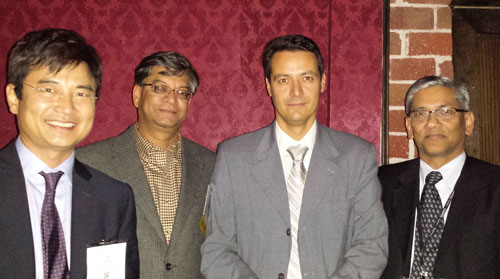 Around 100 ' Top Reviewers'  for the journal Computers & Chemical Engineering were invited to a reception, where the winners of the 2012 Best Paper were presented with an award and authors and reviewers were publicly thanked for their contribution to the journal. The venue was a cocktail bar themed after the traditional San Francisco "speakeasy" and guests needed a password to gain access to the "secret library" where the reception was taking place. Over 50 guests attended, including more than 20 Top Reviewers. All the 'Top Reviewers', whether or not they attended the reception, also received a certificate.

Author, editor and reviewer 'thank you' event – Economics and Finance books and journals

Elsevier hosts an annual reception at the Allied Social Science Association (ASSA) conference, to thank Elsevier authors, editors and reviewers who attend the annual meeting for their contribution to Elsevier's economics and finance books and journals.

The event is usually attended by between 120-150 members of the community, from whom we have received positive feedback for showing our appreciation in this way. The event is seen as a way to thank our authors, editors and reviewers, and also to introduce our books and journals teams.

Elsevier's journal Pattern Recognition Letters thanked it's 'top reviewers' by placing an announcement on its journal homepage on Elsevier.com. Social media announcements were also sent out. In this campaign twenty-six top reviewers (2008-2012) were openly thanked for their hard work and dedication. The criteria set for being a 'top reviewer' were reviewers who had carried out a minimum of ten, high quality and timely reviews during 2008 – 2012, for Pattern Recognition Letters.

You can view the 'thank you' announcement here.

Vaccine ' thank you' to reviewers campaign

At the 8th Vaccine & ISV Congress, Vaccine's 'top reviewers' were publicly thanked for their contributions in 2013. Posters were displayed at the Elsevier booth and the list of 'top reviewers'  was published in the congress program book.