Establishing a reputation as a valuable reviewer earns you a special place in the community of a journal. When new members of the Editorial Board are being considered, the editor is very likely to first consider people who have served the journal well, as both a well-cited author and a valuable reviewer. Find out what makes you a valuable reviewer in the eyes of editors and how that can advance your career in research.

Based on an earlier article entitled From early career researcher to Editor-in-Chief in 5 steps, we invited Professor Verity J Brown to give a presentation on How Reviewers become Editors.

This is available online via the Publishing Campus >> 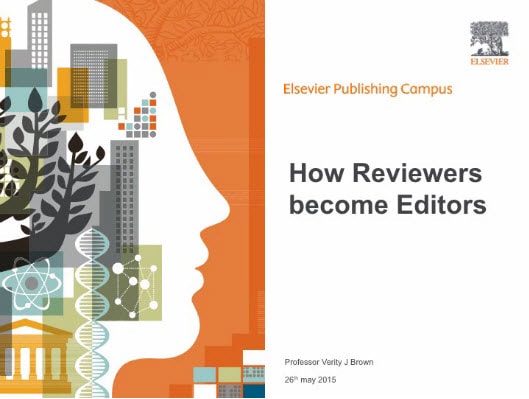 Professor Verity J Brown is the Vice-Principal (Enterprise and Engagement) of the University of St Andrews. Her academic background is behavioural neuroscience, with her main research interest being to elucidate the cognitive impairments associated with psychiatric illnesses and to identify potential pharmacological strategies to alleviate these.

Educated at University College London and the University of Cambridge, Professor Brown has been a member of staff at St Andrews since 1993. Before assuming the role of Vice-Principal, she was Provost of St Leonard’s College and, prior to that, she served as Head of the School of Psychology & Neuroscience (2000-2006 and 2011-2013). She was a Royal Society Industry Fellow (2007-12) and is a Fellow of the Royal Society of Edinburgh, the Society of Biology and the Higher Education Academy.