The Rise of Asia: A Research Profile

The rapid growth of Asia’s research community has led to some countries in the region being referred to as “rising stars” or the “next scientific superpowers”.

The region is certainly promising from a scientific point of view. In this article we discuss some of the statistics underlying its development and we examine the current state of research in Asia.

How many articles are published in each of the Asian countries per year?

Figure 1 (below) details article output for Asian countries on the horizontal axis. The different data points per country represent the years from 2006-2010. We can see that China is experiencing explosive growth in article output. India is catching up: output numbers are still low but the growth percentage is impressive. Output from Japan has remained stable for the last couple of years. Impressive growth can also be seen in Malaysia, Singapore and Thailand (see figure 2). 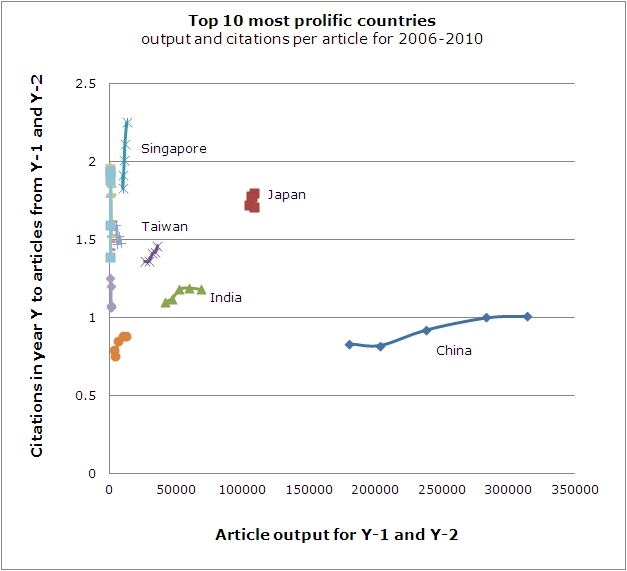 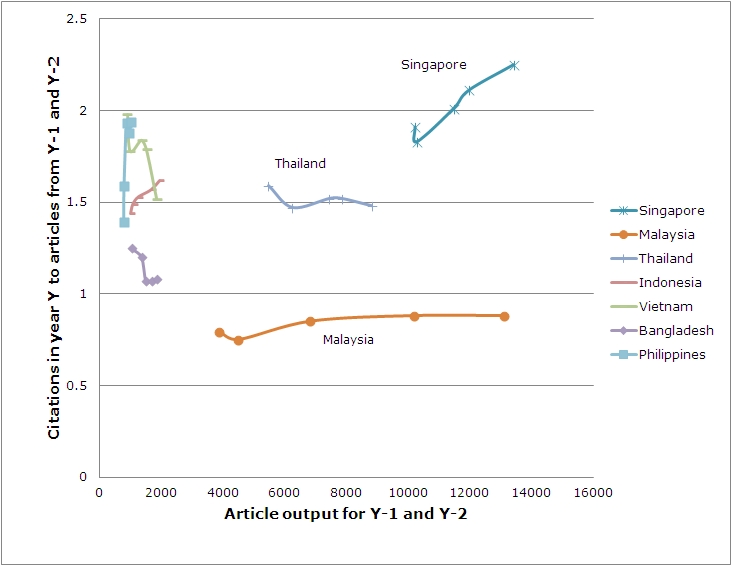 What is the impact of Asian articles?

In Figures 1 and 2, we can also see the impact of the articles on the vertical axis, defined as citations in year Y to articles published in the previous two years. The citations per Chinese article have improved slightly but are still relatively low in quality when compared to other countries. There is a strong emphasis in China on article output, and less so on quality, which may account for the discrepancy between quantity and quality growth.

Elsevier’s international editors and reviewers currently reject a substantial part (almost 80%) of the articles submitted from China. This quality control is crucial to ensure that the articles published are representative of the high quality of research coming from China. This rigorous peer-review process has ensured that Elsevier-published articles from China already have citation rates higher than those of established countries like France. For India, we can see in Figure 1 that there was an initial increase before citations per article appeared to stabilize.  For Japan, not much has changed in the last five years.  Even though Taiwan publishes fewer papers than Japan, both the number of papers published and their impact seem to be increasing.

Which countries are strong in international collaboration?

For this analysis, we selected countries with more than 250 articles published in 2010. At 71%, Vietnam has the highest percentage of articles achieved through international collaboration. China and India appear at the bottom of the list with only 15% and 18% respectively. In general, we see that the larger the output from the country, the lower the international collaboration. (For more information see Research Trends, Small Countries Lead International Collaboration, December 2009, Judith Kamalski.)

Language issues appear to form a barrier for some of these countries. In order to assist the scientific community in Asia, Elsevier regularly organizes author workshops. These offer advice ranging from how to increase the chance your article is published to international publishing standards (including language), and ethics. Elsevier also offers a Language Editing Service that ensures manuscripts are free of grammatical and spelling errors.

One of the consequences of China’s meteoric rise is that it is projected to have the same world article share as the United States by 2013 (see Figure 3). From that point onward, China will be the largest country in the world in terms of scientific output. 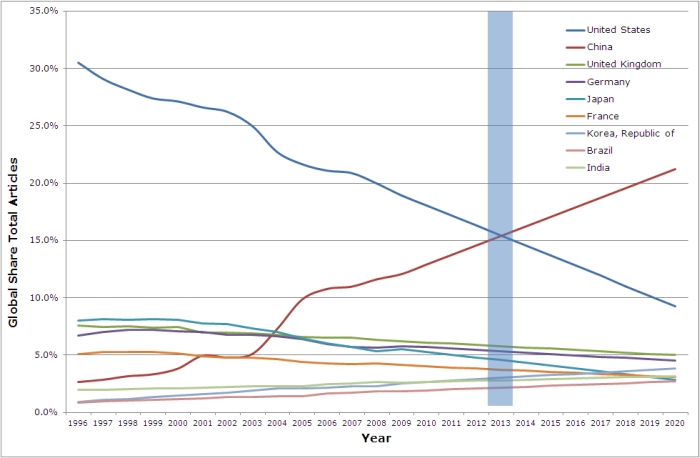 Differences in output and quality between Asian countries are larger than those between, for instance, countries in Europe. In general, with a rising number of scientists having access to more and more articles, differences between countries are reduced. Does this mean that Asian countries will increasingly resemble each other in terms of scientific profiles? That is difficult to predict as a number of factors will play a determining role, including government policies on, and investments in, science, and the economic growth of the country. These influence how quickly they can grow scientific output and increase quality.

Asia’s research position is getting stronger, but is still divided: countries such as Japan are relatively stable in output and quality, while other countries, such as China and India, see a rapid growth, especially in output. What does this mean for our editors? The flow of submissions from Asia will continue to increase, but so will the quality of articles. These developments outline the need for a gradual adaptation of our journals’ editorial boards to accurately reflect the geographical balances in the scientific world. 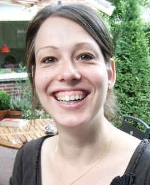 Judith Kamalski
PUBLISHING INFORMATION MANAGER, RESEARCH & ACADEMIC RELATIONS
Using citation information, Judith gives advice to journal publishers and editors on how to improve their journals, or to sales staff on characteristics of the universities they visit. Her particular interest lies in the use of the Impact Factor and the emergence of alternative metrics for journal evaluation. Judith regularly presents on these and other topics. She holds two Master’s degrees, one in Corporate Communication and one in French Literature (Radboud Universiteit Nijmegen and Sorbonne, Paris IV). Her PhD research focused on the role of language in persuasion (Utrecht and Florida State Universities). 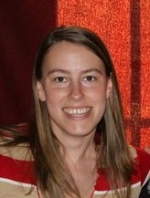 Rose L’Huillier
DIRECTOR STRATEGY AND JOURNAL SERVICES, SCIENCE & TECHNOLOGY
Rose trained as an applied mathematician at the Erasmus University of Rotterdam and also holds Master’s degrees in English Literature and Literary Science. She is currently an MBA candidate at the Rotterdam School of Management. In the past seven years she has worked in various Elsevier departments such as production, marketing, strategy, and publishing. She has worked with flagship journals such as The Lancet and Cell and in specialized areas such as High Energy Physics, Nuclear Physics, and Astronomy. She has recently turned her focus to strategic issues in the company and she is currently responsible for the high-level strategy of Elsevier S&T Journals.

I guess this is why I stopped reading the journals, too much bulk and nothing of value. Maybe I am seeing this differently, but I guess quantity rules over value.