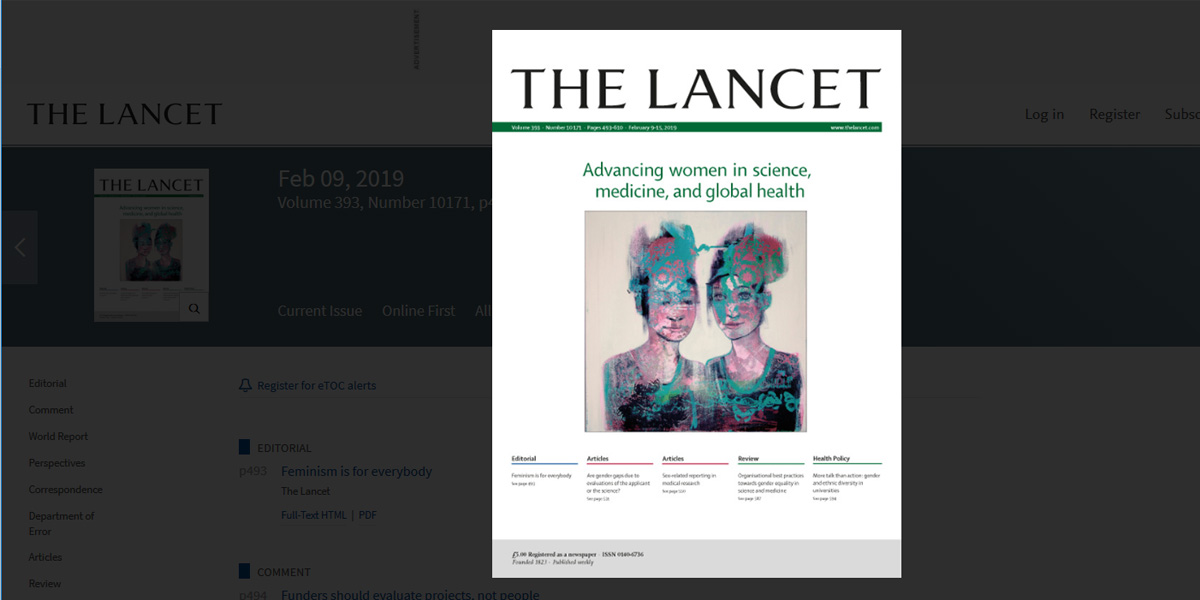 The Lancet theme issue online. (Original painting – acrylic on canvas – by Sophie McKay Knight, with imagery contributed by women scientists from the University of St. Andrews as part of the Chrysalis Project coordinated by Dr. Mhairi Stewart)

Gender equity in science is not only a matter of justice and rights; it is crucial to producing the best research and the best care for patients.

With those words, Executive Editor Dr. Jocalyn Clark summed up a special issue of The Lancet dedicated to advancing gender equity in science, medicine and global health.

In publishing an international collection of papers presenting new evidence, commentary and analysis, The Lancet calls on researchers, clinicians, funders, institutional leaders and medical journals to examine and address the systemic barriers to advancing women in these fields. 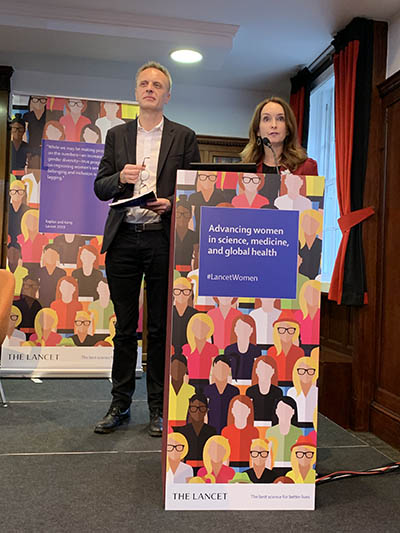 “The evidence is clear: women are disadvantaged within science, medicine and global health,” says Dr. Clark, who co-led the project. “The source of that disadvantage is gender bias, which is a core feature of the very systems that organise these three fields.

“These problems are now well described. Our theme issue seeks to offer solutions to confront bias, improve diversity and inclusivity and drive change. Action and accountability from institutional leaders is now urgently needed.

“The theme issue is unique – I don’t think we’ve seen an issue of a medical journal quite like this until now.”

The issue was conceptualised in 2017. After The Lancet issued a call for papers, they received more than 300 submissions from over 40 countries. All content underwent the usual Lancet peer review process, and an international advisory group of 14 men and women was formed to help guide and inform the process.

“The volume of submissions, and the overwhelmingly positive response to the theme issue, have highlighted the importance of a world-renowned medical journal taking a stand on the issue of gender equity,” says Dr. Liz Zuccala, Acting Deputy Editor of The Lancet HIV, who co-led the project.

Compared with men, women are less likely to be viewed as scientific leaders, contribute more labour for less credit on publications, and are more likely to experience harassment. A new research paper provides evidence that gender gaps in research funding are due to the less favourable assessment of women, not the quality of their science. An analysis of 24,000 grant applications at the Canadian Institutes of Health Research between 2011 and 2016 found that when assessments were done primarily on the leadership and expertise of the principal investigator, the gender gap was four times higher than when assessments were done primarily on the quality of the science.

Another new analysis, based on 1.5 million medical research papers, found that only one in three biomedical studies reported sex-related outcomes and that female authors were more likely to report on sex differences. With many treatments acting differently on men and women, lack of sex-related reporting can restrict the clinical relevance of research, highlighting that diversity in the workforce – as well as within the research population – is essential to produce the most rigorous and effective research. In a third paper, an analysis showed that clear gender and ethnic disparities remain at the most senior academic positions at the 15 highest ranked social sciences and public health universities in the USA, the UK, and Canada, despite numerous diversity policies and action plans in place at these universities. The authors call for diversity data to be included in influential university ranking tables, such as Times Higher Education or US News, to accelerate change.

Despite diversity and inclusion policies becoming ubiquitous in organisations – from implicit bias training to workshops based on the idea that we must “fix” women by teaching them negotiation or assertiveness skills – many institutional policies are not supported by the evidence. A new review debunks five myths about diversity and inclusion, highlighting decades of research showing that focusing on the individual will not lead to progress; instead, authors say, the focus should be on structural and systemic interventions to drive change. Another paper outlines organisational best practices towards gender equality in science and medicine.

Meanwhile, a powerful commentary calls for a #TimesUp in medicine and science to call out sexual harassment.

The theme issue was launched at a high profile event in London on 8 February, attended by 140 researchers, advocates and institutional leaders to discuss, debate and generate actions, and at a second event on 11 February at Columbia University in New York. 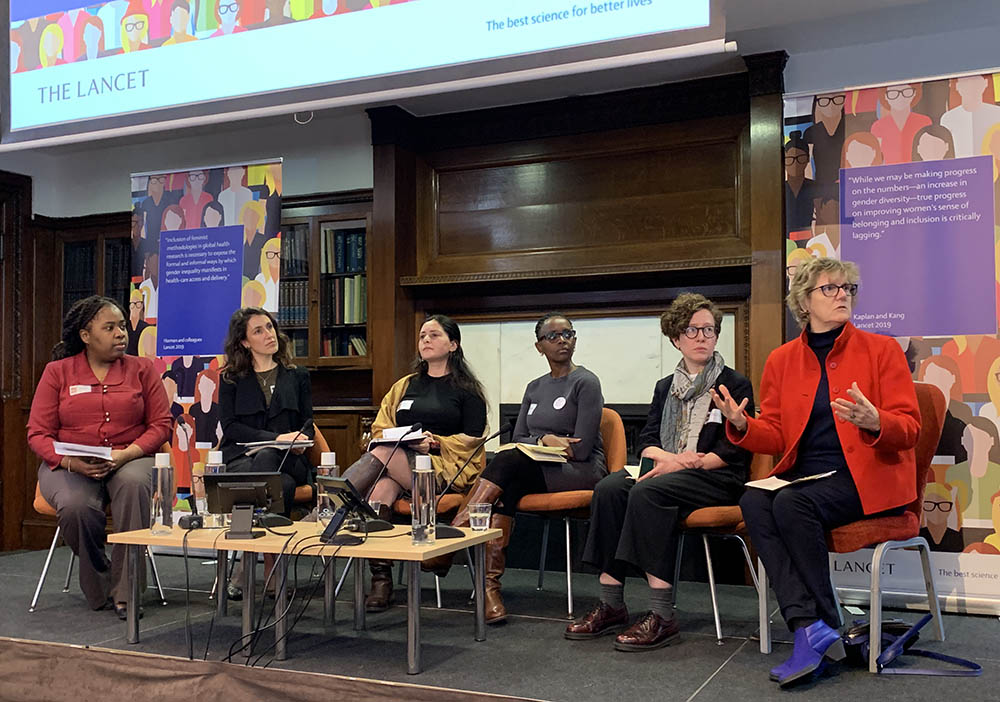 The Lancet's commitments to addressing gender equity for women in science go beyond the theme issue. Dr Richard Horton, Editor-in-Chief of The Lancet, says:

For us, this initiative is about much more than publishing a theme issue. This process has led to a complete reappraisal of who we are, what we do, and what we want to be. As a journal, we will continue to publish, advocate and hold leaders to account for their promises on gender equity.

The Lancet has made its own commitments towards gender equity in a commentary published in the theme issue. Women represent 79 percent of the editorial staff, but this is in contrast to a vastly male-dominated set of peer-reviewers. The journal has committed to a new diversity pledge: a complete refresh of its editorial advisory boards for gender parity across all journals by the end of 2019 and a target of 35 percent women reviewers by 2020 (from 28 percent in 2017).

In an editorial, The Lancet makes a call to action that goes beyond publishers and those in the fields of science and medicine: “The fight for gender equity is everyone’s responsibility, and this means that feminism, too, is for everybody — for men and women, researchers, clinicians, funders, institutional leaders, and, yes, even for medical journals.” 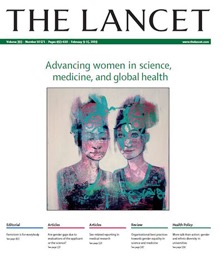 The theme issue is free to read with registration to thelancet.com. In addition, you can read all the related content from the Lancet journals published over the course of the project and select profiles of women leaders, and find out more about our international launch events. Timed to the launch, several Lancet specialty journals published related content including a Comment in The Lancet Oncology on female representation among US National Comprehensive Cancer Network guideline panel members and a letter in The Lancet Global Health on the gender income gap among doctors and nurses in Peru. 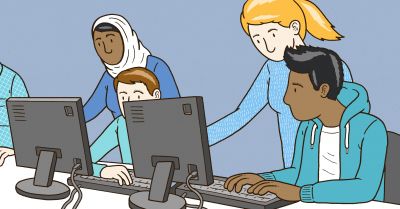 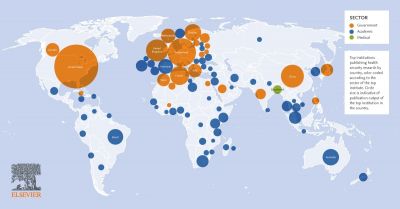 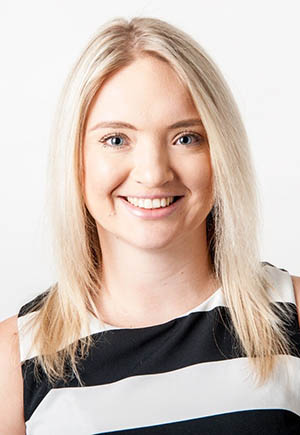 Stephanie Clague is the Communications Officer for The Lancet journals at Elsevier. Previously, she was a Senior Assistant Editor for The Lancet. She has a bachelor’s degree in Biomedical Science from the University of Warwick. 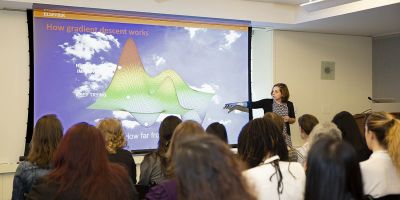 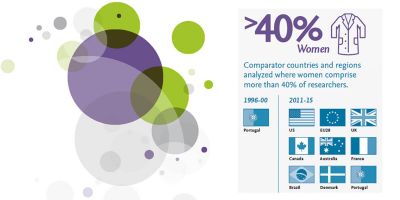 3 facts about gender equality in science and health