Professor’s work gave her a window into gender inequity, so she took action

Prof. Barbara Rothen-Rutishauser is using an Agents of Change grant to empower women in academia

By Ian Evans - March 9, 2020  5 mins
A roundtable at the National Center of Competence in Research Bio-Inspired Materials (NCCR) on February 12. Prof. Katharina Maniura of EMPA in St. Gallen, Switzerland shared her experiences and challenges as a female scientist with NCCR faculty. Prof. Maniura is on the left at the head of the table; Prof. Rothen-Rutishauser is on the right at the head of the table. (Photo by Scott Capper)

When she first became the faculty delegate for the advancement of young researchers and women of Switzerland’s National Center of Competence in Research Bio-Inspired Materials, Prof. Barbara Rothen-Rutishauser thought the world of research was a level playing-field for researchers no matter what their gender. However, as time went on, she recalled, she began to see that this was far from the case:

In 2014, when I started this role, I thought, ‘Well, nowadays it’s no longer necessary to provide additional support for female researchers.’ However, the more I do and the more I experience in this role, the more I realize we have so far to go. 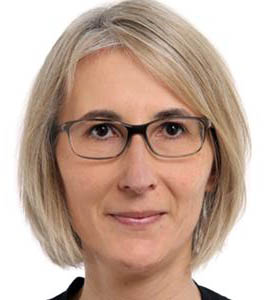 Barbara is a recipient of the Agents of Change Award, organized by Elsevier journal community Materials Today. The award recognizes initiatives and programs that focus on driving gender equality in the materials science research community. The program Barbara initiated with her colleagues Prof. Alke Fink and Dr. Sofía Martín Caba is centered around the professional confidence of women scientists, and the prize came with a £10,000 grant.

Barbara explained that she’d always had support from her family and mentors, who were there to encourage her to stay in academia and take new chances. However, as her career progressed, she saw that a lot of women didn’t have that same benefit. Without people to back them up and give them the confidence to succeed, they would leave research, taking years of experience with them. It was a realization that built up over several key moments. Barbara recalled one moment at a college speaking event with about 100 participants.

After the talk, the speaker offered to take questions and was surrounded by male colleagues. One of the female students was standing to the side. I asked if she needed anything, and she said she wanted to ask the speaker something but was waiting for all the men to ask their questions first.

Another instance featured a woman who revealed that she felt that she couldn’t apply for a professor’s position because there was one requirement she didn’t quite meet. “She would have been a great for the role,” Barbara said, “and it was revealing that she didn’t have the confidence to even apply.”

Elsevier’s own gender research report shows that while the gap between men and women in research is narrowing, there is still much to be done. Women researchers still publish fewer papers and receive fewer grants than men. Against that backdrop, Barbara and her colleagues run roundtable events that provide women with a secure environment to share their experiences and get feedback and advice.

Most of those sessions are also open to men. As Barbara explained, men have a role to play in supporting women in research and many will be keen to address unconscious biases and look for ways to include female researchers:

One of the things we talk about at these sessions are the male power games you see at play. For example, when you find yourself in a working group, one of the things you notice is that when the tasks are being distributed, women are usually the first to take work on. Men look to them to volunteer. So, for example, a male head of department could take that example and be aware of the need to assign tasks equally. In the same way, they can also be aware that women may not always feel they can speak up when they have a point to make.

With the grant, Barbara and her team plan to expand the work they’re doing – including holding events designed to help women expand their networks. The aim is to help implement a true culture of gender equality, to achieve a real gender balance among the next generation of scientists and provide a template for the enhanced integration of women in natural and life science disciplines. It’s a significant challenge, but Barbara has seen first-hand the difference her work can make:

We recently had some roundtable events about improving your CV, specifically looking at getting positions in industry. We had a great co-host – a woman from the industry side who worked on recruitment and shared her insights about how to best showcase yourself for these roles.

Afterwards, one of the participants came up to me and said, ‘I just had a first-round interview for an industry position, and they’ve just invited me to the second round. I can apply everything I’ve learned today at the next round.’ That was just brilliant to hear.

Elsevier leaders on Scholarly Kitchen: We need to work together to close the gender gap