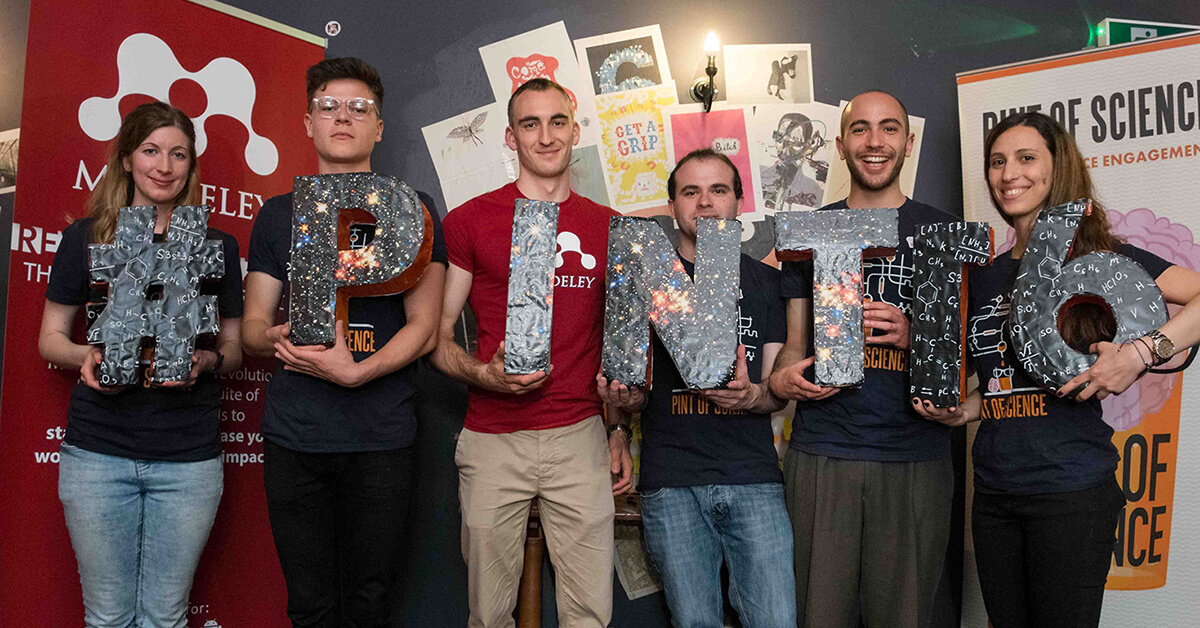 If there’s one thing that Pint of Science and an Adele concert have in common it’s that they both get sold out very quickly! However, unlike the Adele tour, the Pint of Science event takes place annually and will return in 2017. Interested in getting involved? Read on…

So…what is it exactly?

“The Pint of Science festival began in 2012 as the brainchild of Dr. Praveen Paul and Dr. Michael Motskin of Imperial College London. They started by inviting the public into their labs but moved on to taking their science out to meet the public in that great British institution – the pub. The first festival, in 2013, had 45 events in three cities in the UK. Since then, the festival has grown into the largest in the world; this year’s festival featured more than 900 events in 12 countries.

We were delighted to support this initiative which gives researchers throughout the world the opportunity to share their research with the public in a way that benefits the community as well as the researchers themselves. Research funders are increasingly asking scientists to step outside of their comfort zone and get talking about how their research impacts the ‘real world’ and Pint of Science gives them the perfect platform to do just that.

As a PhD student before I joined Elsevier, I had some great experiences in schools running workshops as a STEM ambassador so I am very aware of the benefits of events like this both for the speakers and the audience. Trying to engage a restless class of 8-year-olds by talking about meteorites was challenging (and exhausting!) but the positive feedback from their teachers always made it worthwhile. As an unexpected bonus, I also found that running workshops really improved my confidence in public speaking – after a classroom full of children, no other audience seems quite so intimidating!

Meeting the organizers at the Pint of Science events I attended this year, many of whom are PhD students themselves, I was reminded of my experiences as a STEM ambassador. Just like I did, I saw many people gaining confidence and catching the science communication bug."

Pint of Science – through the eyes of an Event Manager

We reached out to an Event Manager, Ruth Nottingham, PhD Student from Nottingham University about her experience in being involved with Pint of Science 2016…

I had been involved in science events and communication before so felt totally prepared to offer my help and get involved with Pint of Science Nottingham. However along the way I found out how different organising your own stand or talk is compared to forging a cohesive program of events over 3 nights. 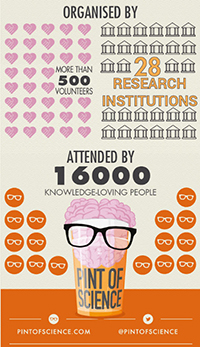 I got to the venue at 3pm to set up the audio visual equipment. I had great help from Tom, the events coordinator at Spanky van Dyke’s, working out extension cords, projector positioning and mic sound checks.

At 4pm the additional chairs and tables I ordered arrived. This was a done so quickly with a group of men piling up furniture in the doorway. They had disappeared gone before I could say a word to them! Efficient you could say, however I was now left with 50 white patio chairs and 10 white patio tables. So much for the black folding chairs I had requested! So the next challenge was to hawl these upstairs and arrange them in the venue space. Now the space looked more like a garden party… without a garden.  I made some other rearrangements by hiding the white plastic tables and replacing them with trendy metal stools that we found in the storage room.

My boyfriend and a friend then helped me carry up the merchandise and set up the banners. The rest of the team arrived at 5:30pm so we still had 1.5hrs before the public arrived.

It was like a whirl wind: T-shirts flying everywhere, pens being launched, banners being hoisted. (By the way, a big thanks to the guys at Elsevier and Mendeley for their support and goodie bags). It all came together and I was breathing a sigh of relief when a side of chips arrived to silence the rumbling in my stomach.

Seconds later our first audience members appeared, which was reassuring even though we knew the event was sold out. We were expecting about 90 people.

A little surge of panic rose when I started to wonder where the speakers were; the crucial part of the whole event! I needn’t have worried though as they arrived on time and then began the time trial to find any technical issues with the presentations. There were some problems and but nothing that the spare USB stick I had with me couldn’t solve.

The event started and everyone was listening avidly to the weird and wonderful world of physics. While they listened, myself and the team were busy filming, tweeting and marking quiz sheets.

After the final applause, myself and the team helped the bar staff clean up. It was very rewarding to see firsthand how many people enjoyed the pint of science! 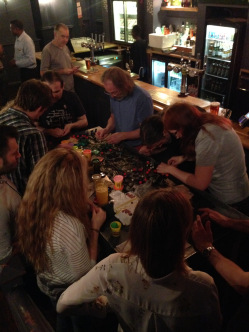 After the hectic nature of the first night the second ran perfectly. The speakers talks were paired with transfer tattoos and a Play-Doh molecule-making stand, which helped encourage people to get even more involved.

And even though we had had a last minute change in the program our replacement speaker was great… and even brought some liquid nitrogen along!

The final day, another sell out evening and fantastic talks about outer space. The audience was great and kept asking questions. In the background, the team was trying to adjust the mics as the audio quality had changed. Then as the rain in Nottingham got heavier, a leak developed!

Panic surged amongst the team at the puddle forming around the electrics. Was the public about to see a live demonstration of what happens when you mix water with electricity? However a word with the management, a bucket and a lot of bin bags later, we were back on track!

The night ended on a high with lots of photos, a giant piece of chocolate fudge cake and the stacking of garden furniture!

For anyone who is interested in getting involved next year (or in any other kind of science event), here are some tips!

I fully recommend getting involved in the Pint of Science festivals around the world to give you a taste of quality scientific public engagement. I’m already looking forward to next year! 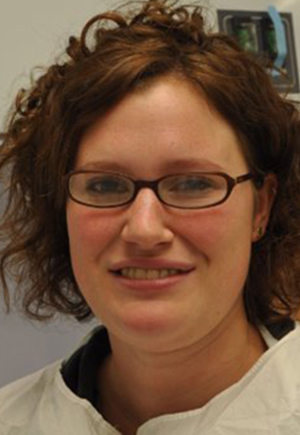 Dr. Kate Hibbert is an Associate Publisher at Elsevier responsible for a portfolio of journals in Earth and Planetary Sciences. Kate joined Elsevier in 2015 after completing a PhD in Earth Sciences at the University of Bristol, where she worked on isotope geochemistry. During her PhD, Kate also did volunteer work in science communication, visiting local schools to talk about Earth Sciences, as well as a placement at the National Assembly for Wales communicating science policy. 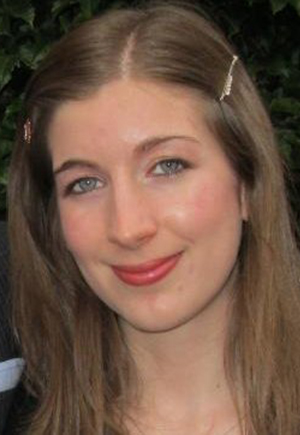 Ruth Nottingham is a final year PhD Student studying Microbiology at Nottingham University. She previously completed her Microbiology degree at Sheffield University and has an interest in a career in science communication and policy.