Results of a recent survey demonstrate that permanent research positions can be tough to find, especially for young researchers

We've always known that there was a reasonable amount of mobility among researchers, but a recent survey shows just how common that can be, particularly for young researchers. Is that necessarily a bad thing? Or is it just part and parcel of being a researcher? 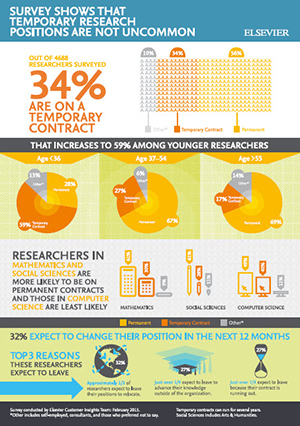 In a recent (unbranded) survey conducted by Elsevier’s Customer Insights team, more than 4,500 researchers shared information on their own situations. These researchers were from all disciplines, ages and geographical regions.

One of the main findings is that many Early Career Researchers who are still working to establish their careers, lack job security in that they are employed on temporary contracts. They also tend to be quite mobile with almost half indicating that they are willing to move abroad to further their career in research.

Almost 70% of those aged older than 37 years had permanent contracts. This compares to only 28% of those in the younger category.

Is being flexible the answer to a successful career in research?

Since obtaining her PhD from Universidad de Córdoba, Spain, Dr. Alina M. Balu has held six positions in five countries. She still doesn’t have a permanent contract but when asked if it was frustrating or just part of being an Early Career Researcher she said:

“Not having a permanent contract is more than a question of frustration. It really depends on the personal views and circumstances of each researcher. I personally enjoy the benefits of having the chance to learn and travel continuously and I found my perfect match in the area of my research. However it can be frustrating, especially for women who want to have children, not to have a permanent job and the stability required for family planning due to the postdoc period.

I know a very smart professor, who got divorced after she went abroad for a postdoc and eventually missed her chance to become a mother. Like an older sister, she advised me not to wait until I got a permanent job as she did. On the other hand, I have another younger friend who doesn’t want to have kids and her husband is very supportive. They travel together to any new location she is heading for.

What I’m trying to say is that flexibility when you’re an early career researchers is important and can open a much greater range of opportunities to grow within your field, especially if it’s a research area that is universal. For some women, it’s just that little bit more complicated if this is also the same period when it comes to having a family.”

Dr Henri-Pierre Jacquot on the other hand is one of the "lucky" ones who has a permanent position.

So in total I have had three temporary positions (if you include the PhD study), before finding something permanent. However, even though I hold a permanent position, I still remember the stress of getting a job when I was a postdoc fellow. The uncertainty is strong and before me I have seen many of friends struggling in getting a position. Even now, some of them feel frustrated and give up their dream of an academic career.

I’m not sure what the answer is but I believe that we should either train less PhD students or train them better for other careers than an academic position. At least in France, PhD students are often not prepared or equipped to find a job in industry. And on the other side, French industries should recognize the title of Doctor in a more favorable way."

Do you have any views on research positions and what could be done (if anything) to improve job security? Or is it something you just have to accept when you enter the world of research? Your thoughts are welcome in the comments section below.