Building a Blueprint for a New Publishing Future

"...it is fair to say that the format of scholarly communications is, at this mid-point in the digital revolution, in an ill-defined transitional state — a ‘horseless carriage’..." Anita de Waard, Disruptive Technologies Director, Elsevier Labs

This summer, together with a group of well-known academics, Elsevier Labs co-organized a Perspectives workshop at Dagstuhl Castle in Germany.

Entitled Force11: Future Research Communications and e-Scholarship 2011, it was a meeting of scholars, librarians, archivists, publishers and research funders who, individually and collectively, aim to bring about a change in scholarly communication through the effective use of information technology. As a key outcome, the group has just published the Force11 Manifesto, a description of issues identified as impeding change and a vision and plan on how to overcome them.

Force11 is a virtual community working to transform scholarly communications through advanced use of computers and the Web.

Concerning the first set of issues, it is fair to say that the format of scholarly communications is, at this mid-point in the digital revolution, in an ill-defined transitional state — a ‘horseless carriage’ — that lies somewhere between the world of print and paper and the world of the Web and computers, with the former still exercising significantly more influence than the latter. Then, most types of scholarship involve claims, and all sciences and many other fields require that these claims be independently testable.

Good results are often re-used, sometimes thousands of times. But actually obtaining the necessary materials, data or software for such re-use is far harder than it should be. Even in the rare cases where the data are part of the research communication, they are typically relegated to the status of ‘supplementary material’, whose format and preservation are currently inadequate.

The last issue pertaining to the form of scholarly communications deals with online access. Here, the knowledge discovery tools are much better but they struggle with the fragmentation of research communication caused by the rapid proliferation of increasingly specialized and overlapping journals. 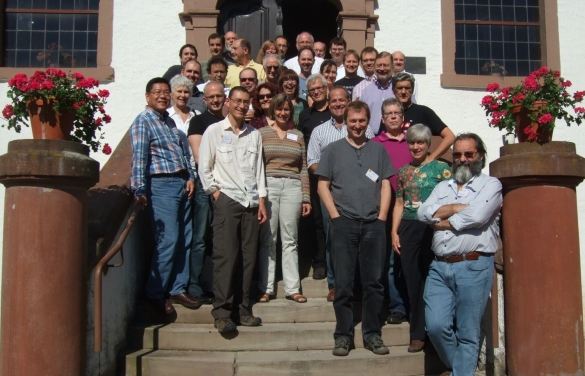 The Force11 attendees on the steps of the chapel at Schloss Dagstuhl. Photo by Leibniz Centre for Informatics.

Ideas for solutions included experimenting with new, enriched forms of scholarly publications consisting of rich and interconnected relationships between knowledge, claims and data. This would require the creation of a platform to create and share computationally executable components, such as workflows, computer code and statistical calculations as scientifically valid pieces of content, and the development of an infrastructure that would allow these components to be made accessible, reviewed, referenced and attributed. To do this, we would have to develop best practices for depositing research datasets in repositories, that enable linking to relevant documents and have high compliance levels driven by appropriate incentives, resources and policies.

For the scientific domain, new forms of publication must facilitate the reproducibility of results: the ability to preserve and re-perform executable workflows or services. This will require us to reconstruct the context within which these objects were created and track them as data objects that evolve through time. In this way, the content of communications about research will follow the same evolutionary path that we have seen for general Web content: a move from the static to the increasingly dynamic, and from top-down articles to grass-roots blogs.

It also means revisiting the narrative structure of scholarly papers, and identifying portions where this narrative may be better structured for improved computational access, without losing the strong cognitive impact that a good story can have.

The impact on editors

For editors, in particular, these futures offer exciting new opportunities. Next to publishing papers, there are new formats that enable the integration of researcher’s workflows, such as myExperiment, Taverna, Vis Trails and Wings. These allow authors to share, and readers to experience, not only a textual description of the methods followed in the publication, but to actually run these workflows on their own laptops, and thereby experience what steps were taken to arrive at experimental results.

Scientific data and software could also be much more tightly integrated with the journal article. In repositories such as Dryad or Dataverse, data, whether it be in the physical, life or social sciences, can be deposited and kept available. If the journal then decides to allow the addition of, e.g. statistical program components (such as R, SPSS or MatLab code), the data in the data repository can be rendered and replayed within the article context, allowing a richer representation of the science. Elsevier’s Executable Paper Grand Challenge offered a platform to display many of these new components, and several are being implemented today.

Life beyond the Impact Factor

The Force11 group also agreed that if we are to explore and implement new forms of scholarly communication, we will need to implement radical changes to the complex socio-technical and commercial ecosystem of scholarly publishing. In particular, to obtain the benefits that networked knowledge promises, we have to explore new academic reward systems that encourage scholars and researchers to participate and contribute to these efforts. This means acknowledging that a journal Impact Factor is only one component to measure the true impact of scholarship and that it needs to be combined with other impact measures.

We need to develop new mechanisms that allow us to measure the true contribution a particular record of scholarship makes to the world’s store of knowledge. It also requires all those involved in the scholarly information life cycle to acknowledge that current business models are no longer adequate support for the rich, variegated, integrated and disparate knowledge offerings which new technologies enable, new scholarship requires, and new players in the scholarly field (including non-Western countries and the general public) deserve.

In a collaboration involving scholars, publishers, libraries, funding agencies, academic institutions, and software developers, we need to develop models that can enable this exciting future to develop, while offering sustainable forms of existence to all parties.

The impact of these developments for journal editors would be better integration of journal articles with the rest of the knowledge ecosystem that scientists exist in today. Efforts such as Altmetrics, MESUR (both of which Elsevier is actively collaborating with) and others, aim to expand our concept of impact measures and ensure a high-quality representation of downloads, views, blog links and other elements. In many forums (e.g. see list of workshops below), we are actively engaging in a constructive dialogue with the Open Science/Data/Access movement, to develop ways of integrating existing and new business models.

Mapping out the path ahead

The overall conclusion of the Force11 group is that the changing formats, tools, roles and business models of scholarly publishing form an immense challenge for libraries, publishers and software developers. The only fruitful way forward, we firmly believe, will be for all parties collaborating to build new tools that optimally support scholarship in a distributed open environment. Only by creating a demonstrably better research environment will we convince the entire system of scholarly communication and merit assessment to adopt new forms and models.

A great outcome of the Force11 meeting was that several library groups are interested in joining Force11, and working together to redefine ‘the research library of the future’. There appears to be a great amount of ideas, tools, and enthusiasm to do this work, and a willingness and interest to do this collaboratively. We are very much looking forward to strengthening the connections made this year, and developing plans to help build these fundamentally new platforms in 2012.

A (non-exhaustive) list of workshops about transforming scholarly communication held in 2011:

Do you share the views of Force11? Where do you see scholarly communications heading in the years to come? Let us know by posting a comment below. 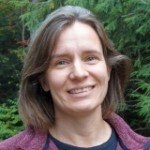 Anita de Waard
DISRUPTIVE TECHNOLOGIES DIRECTOR, ELSEVIER LABS
Anita has a background in experimental physics. She joined Elsevier as a publisher in physics and neurology in 1988, before taking on her current role in 1997. Elsevier Labs stimulates the usage, awareness and integration of new information technologies within Elsevier. Anita’s interests include the application of Semantic Web technologies for scientific communication; her research focuses on discourse analysis of biological text, with an emphasis on finding key rhetorical components, offering applications in the fields of hypothesis detection and automated copy editing.