"...a powerful metaphor for understanding their work as science critics is to see them as cartographers and guides..." Author Declan Fahy in Columbia Journalism Review

In Elsevier’s newsroom, we are responsible for working with the media on press coverage of research and responding to various inquires pertaining to scientific or research misconduct. From this vantage point, we are observing a notable trend, and unfortunately that trend is that the growth in coverage of scientific misconduct is outpacing that of the research itself.

Traditional scientific coverage is slowing due to a fall in the number of professional science media working today. In 2009, Nature1 chronicled the situation by noting that the number of dedicated science sections in American newspapers fell from a peak of about 95 to 34 between 1989 and 2005. Accordingly, in the same survey, 26% of global journalists reported job losses, and of the remaining journalists, 59% had less time per article available.

The Nature article appeared in the same year that more than 1.5 million articles were published, a figure that is growing by 3-4% each year2. Meanwhile, research is becoming more technical, inter-disciplinary and global in nature. Consider that 25% of Elsevier’s journals fall into more than one subject collection area, and 35% of our papers include authors from different countries3.

In other words, when we need experienced traditional science media professionals most, we have fewer of them. However, the number of freelance science journalists and bloggers is increasing. In fact, as of 2009, of the 2,000 US-based National Association of Science Writers members, only 79 were full-time staff science writers for newspapers4. Further, remaining science reporters cited getting more story leads from science bloggers1, which suggests science is still being covered, but by a new breed of reporter.

This shift from traditional reporters to freelancers and bloggers coincides with a greater ability to detect and report on academic misconduct. And there has been a lot of misbehavior to expose. A 2002 NIH-funded survey of several thousand scientists in the USA found that around one third admitted they had engaged in at least one sanctionable misbehavior in the prior three years5. We can also presume that with competition for research dollars, tenure, prestige, and patents increasing in line with our ability to detect misconduct, there will be even more.

Impact of the New Media Landscape

In a recent Columbia Journalism Review article, Skeptical of Science6, author Declan Fahy states, “among other new roles, journalists are becoming more critical of research.” He describes how journalists are being “undercut by the emergence of a new science media ecosystem in which scientific journals, institutions and individuals are producing original science content directly for non-specialist audiences.” The author notes that, “consequently, they need additional ways to attract readers and maintain their professional identity.”

Take Ivan Oransky, Executive Editor at Reuters Health, for example. Ivan is a seasoned health reporter who graduated from Harvard, obtained an MD from New York University, has written for The Lancet, and is a professor at NYU. Still, Ivan lived in relative obscurity until he launched his side job as a blogger at Retraction Watch, a new form of science blog with 150,000 page views per month and a mission to increase the transparency of the retraction process.

Now Ivan is himself the news. He speaks at conferences, appears on National Public Radio and Retraction Watch is routinely sourced by top-tier media. By looking into the stories behind retractions, Ivan, and his blog partner, Adam Marcus, have staked a new claim as the journalism community’s academic misconduct experts. They believe in keeping science honest and that if the research community reveals more of its own flaws, the level of trust in it will rise. 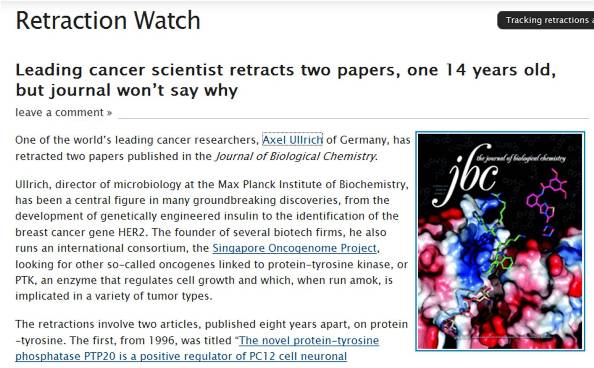 Ivan and Adam represent the new breed of science watchdog that is able to promote the results of their own investigations quickly via the internet. Beyond them, there are scientists, both aggrieved and benevolent, who spend time identifying cracks in scientific literature and making them public. Either through Retraction Watch or their own blogs, skeptical scientists aided by the internet have helped shed new and bright lights on scientific misconduct in ways never before seen.

And Retraction Watch has no shortage of material to work with. A recent Nature article7 captured how an increase in withdrawn papers is highlighting weaknesses in the system for handling them; and it’s the handling of them that gets watchdogs’ attention. For example, ‘opaque retraction notices that don't explain why a paper has been withdrawn.’

As publishers, we are mindful that the dramatic increase in access to scientific research in recent years has led to an increase in the level of critical review of these articles. The good news here is that these watchdogs are able to help editors keep scientists highly accountable for their work. The bad news is that they often print inaccurate and incomplete stories, which as a result can appear one-sided against those who don’t provide them with all the information they request. And they can take up an inordinate amount of editors’ time.

Are they entitled to your time?

For editors, the new breed of journalist is completely different and can be far more frustrating to work with than the traditional science reporter. The key is to spend time thinking about what the new media world means for your journal, and then develop your own approach to responding. Your publisher and Elsevier’s corporate media staff can work through this process with you. We can also help you manage the inquiries in a professional manner, i.e., making sure only credible inquiries are addressed, taking up a minimal amount of your time, and providing only appropriate, accurate information.

Increased skepticism and critical review in science can be complicated, combative, time consuming, and political. Many allegations and requests to investigate are legitimate, many not, but it’s become very clear that everything is more transparent in this new era. We have to acknowledge that every article and decision can be questioned. Promoting science and engendering trust require a new mindset that editors should become familiar with if they want their journal viewed favorably in the press – both traditional and new media.

The key is to remember that with the internet, the politicalization of science, and the rise of ethics journalism, the conduct of science has more visibility than ever. In his Columbia Journalism Review article6, Fahy suggests that ”a powerful metaphor for understanding their work as science critics is to see them as cartographers and guides, mapping scientific knowledge for readers, showing them paths through vast amounts of information, evaluating and pointing out the most important stops along the way.”

The inquiries and coverage from science skeptics is not always comfortable, but in this new era of science media, it can be a positive development for retaining public trust.

What do you think about the changing make-up of the media ? You can share your thoughts by posting a comment below. 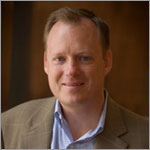 Tom Reller
VICE PRESIDENT AND HEAD OF GLOBAL CORPORATE RELATIONS
Tom is the primary media spokesman for Elsevier – responsible for the company’s relationships with media, analysts and other online/social media communities. He manages public relations programs and actively works with external organizations to help build Elsevier’s reputation and promote the many contributions Elsevier makes to Health and Science communities. These include partnerships developed through the Elsevier Foundation, where he is responsible for running programs benefitting the global nurse faculty profession.

This issue, particularly the segment on Watching Retraction Watch by Tom Reller was outstanding.

I especially like this little nugget… “The bad news is that they often print inaccurate and incomplete stories, which as a result can appear one-sided against those who don’t provide them with all the information they request. And they can take up an inordinate amount of editors’ time.”

The same criticism (they sometimes print inaccurate one-sided stories) could easily be leveled at the established media. And so what if they take up an editor’s time – isn’t it part of an editor’s job to look out for indiscretion?

Dr. Brookes, thank you for your comment. I think you’re pointing out something I could have been more clear about in the piece.  By suggesting the articles are incomplete and inaccurate, I didn’t mean to suggest that bloggers were poor reporters, it’s just that by the nature of their inquiry (for example author misconduct), I know they don’t have the complete story, because we didn’t share it.  The RW bloggers in fact are seasoned, skilled reporters who apply the same methods in obtaining information to their blog as they do to their day job, but the threshold of what they’re allowed to run with is lower in their blog, than it is their professional publication.

It’s an interesting position for us as publishers, because while we may have more information about what transpired in the course of any particular retraction, it’s not always appropriate to share it. It’s even potentially libellous.

And I think you’re right about editors looking out for indiscretion. The challenge now is that accusations of indiscretion are increasing, while editors’ time to look into them all, is not. Editors therefore need to think more deliberately and strategically about which inquiries are valid, which ones are not and which ones they want to discuss publicly.

I value the work of people who dig out mistakes and/or misconduct in published research. It seems that the pressure of publish or perish has gotten to a point where people succumb to taking shortcuts.

However, especially considering the “warnings” to editors in this article and in the commentary, I wonder if we are entering a situation where editors will shy away from groundbreaking research, be it completely new insights or the challenging of widely held beliefs, because the editors will fear the amount of work that may cause down the line. This would be a shame.

I totally agree with transparency and speed in science. The number of scientists has increased dramatically. The majority do not tolerate fraudsters.