Looking at research from a new angle

Emma Granqvist, a journal Publisher for Elsevier’s plant sciences, is behind the recent launch of the open access journal New Negatives in Plant Science, a platform for negative, unexpected or controversial results in the field. The journal is viewed as a pilot and may lead to New Negatives in… titles for other research disciplines.

In this article, Dr. Granqvist explains why she believes scientists should move away from positive bias to ensure all research results are shared through peer review.

Many experimental results never see the light of publication day. For a large number of these, it comes down to the data being “negative”, i.e. the expected and/or wanted effect was not observed. A straightforward example might be the testing of a soil additive that is believed to help a plant grow. If the experiment outcome shows no difference between the standard soil and the soil with the additive, then the result will end up buried in the laboratory’s archive.

But is this really the best approach to scientific results?

Reducing the positive bias in the scientific literature 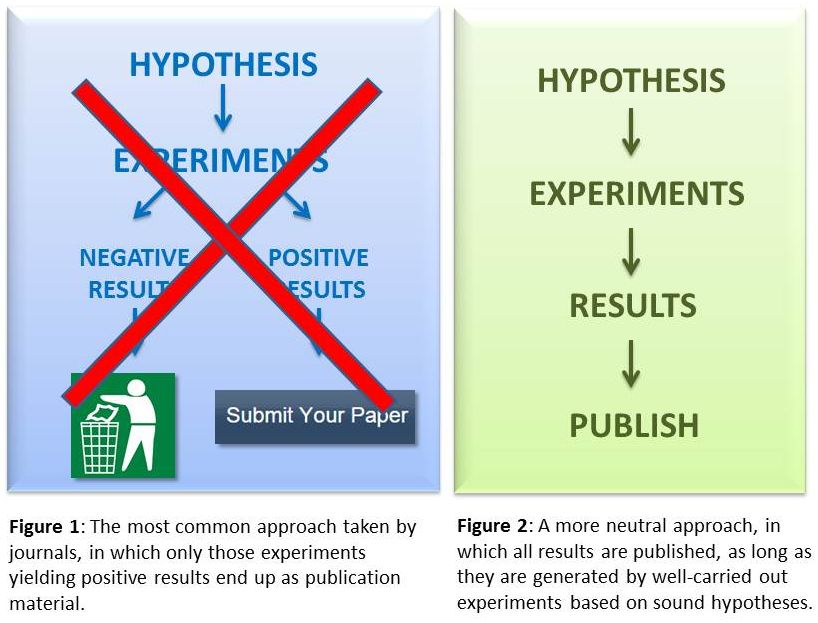 Ignoring the vast information source that is negative results is troublesome in several ways. Firstly, it skews the scientific literature by only including chosen pieces of information. Secondly, it causes a huge waste of time and resources, as other scientists considering the same questions may perform the same experiments.

Furthermore, given that positive results are published, whereas negative data will struggle, it is extremely difficult to correct the scientific record for false positives; controversial studies that conflict with or cannot reproduce previously published studies are seldom given space in peer-reviewed journals.

Sometimes the argument is given that negative data “cannot be trusted”. But as was pointed out in the 2013 article “Trouble at the Lab” in The Economist, negative data are statistically more trustworthy than positive data.

Given that restrictions in publication space is becoming outdated in today’s world of digital information, it would be more efficient and un-biased if all results were made available to the interested scientific community. For the funding bodies this holds an additional benefit: a grant funding research that resulted in negative data would then still result in publications and shared information. 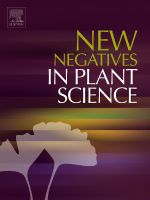 To raise this important issue, and put the spotlight on negative and controversial data, the journal New Negatives in Plant Science was launched in 2014. It is an open access journal that publishes both research articles and commentaries. While there are other journals that welcome negative results, New Negatives in Plant Science aims to encourage and drive scientific debate by giving these studies a place of their own.

The editors, Dr. Thomas W. Okita of Washington State University and Dr. José A. Olivares of Los Alamos National Laboratory, point out that this information can be valuable to the scientific community in a number of ways, for example, by helping others to avoid repeating the same experiments as well as encouraging new hypothesis building.

Currently, two Special Issues of the journal are being prepared; one on Controversial issues in Plant Carbohydrate Metabolism and one on Negative Data on Nutrient Use Efficiency in Plants.

There has been a great number of positive reactions from the community around the launch of the journal. In a recent quiz on the journal’s homepage, many scientists explained why they thought negative and controversial results should be published for public consumption. A few of their comments are shown below. The winner of the journal’s quiz was awarded a travel grant to the Elsevier Current Opinion conference on Plant Genome Evolution. Thanks to all quiz participants for your contributions!

"Be bold, and simply let the world know what you ‘negatively‘ know.” Jickerson P. Lado

“It will bring openness to the scientific community and stimulate innovation.” Leonard Rusinamhodzi 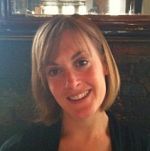 Emma Granqvist, PhD, is a Publisher for plant sciences with Elsevier, and is based in Amsterdam. Originally from Stockholm, Sweden, Emma started her studies in Biology at Lund University. Her main focus was molecular plant science, and she subsequently moved to the United Kingdom and studied at UEA (University of East Anglia) in Norwich. After finishing her PhD at the UK’s John Innes Centre, an independent research institute that focuses on plant and microbial sciences, Emma moved on to scientific publishing at Elsevier.

James Gutmann says: March 13, 2015 at 7:07 pm
Agree completely with this concept. Furthermore, why does everything have to be subject to a carefully chosen statistical analysis that ensures significance? Some phenomena can easily fall within the yes or no categories. Read JR Platt, Scientific American 1964…too many editors must have the numbers that provide a level of comfort or perceived credibility…

Popoola Kehinde says: March 14, 2015 at 11:29 am
This is great, it will go along way on shedding light on controversial research areas

karel smetana says: March 16, 2015 at 8:26 am
The idea might be very useful for all of us. It might save our time by repeating our studies and observations the results of which do not provide new information.

Isabel Suarez-Ruiz says: March 17, 2015 at 4:01 pm
I totally agree because a negative result is a result either, but in addition is a way of saving time, effort and money for other scientits

avraam isayev says: March 17, 2015 at 4:08 pm
In the world where the success is rewarded, it is very important to report experiences where positive effects were not achieved. Of course, the idea and hypothesis should be sound ones to carry out research that led to negative results. Reporting negative results will save significant amount funds and efforts by others engaged in research. Right now there is too much emphasis on the success, but remember even gold mine has a lot of dirt.

Dr. V.K.Jain says: March 17, 2015 at 4:42 pm
Yes, we did get the negative results in a nano-finishing experiments (Magnetorheological abrasive flow finishing process). We spent about one and half months to find its explanation. It was the most exciting findings of the Ph.D. thesis of my student.

James Palmer says: March 17, 2015 at 4:45 pm
Clearly this is important, but results can be negative for many reasons. For instance remember a field trip to a USDA lab in Salinas, California where I observed Professor Thiemann weeding dead plants out of a test plot. I asked him why he would do that, and he answered that the plants like it.

Martin says: March 17, 2015 at 9:35 pm
Negative result publishing is a real good thing. It could help to avoid wasting billions of dollars spent to research projects which are supported by special lobbyistic structures. Biofuel from micro-organisms is a well-known example for it.

Dr. Niroshan Sivathasan says: March 18, 2015 at 9:56 am
I totally agree with Emma Granqvist, and have been saying, for years, that something similar needs to happen in the world of medicine – where topics have great emotional value, and skewing of data is commonplace, in part due to pharmaceutical companies being in bed with various governments around the world!
I like what Avraam Isayev has written, but must say that I am not convinced by James Gutmann’s sentiments; I believe that scientific significance is a very important concept!

Michael Kenward says: March 27, 2015 at 4:02 pm
I once tried to persuade an eminent scientist to take part in a project about “my biggest mistakes in research”. No way! was the response.

Robert Pompe says: April 3, 2015 at 1:13 pm
Everyone agrees and it is very easy to do….BUT: the problem is that most of the reserach nowadays is financed by external sources. And: it is difficult to include negative results in a Thesis work or in a EU community project – since next time you look for financing – what happens? no one wants to pay you for negative results even when they can be actually more valuable. Thus: a fundamental attitude has to be changed.
Reply