Every year, researchers submit around 1.2 million manuscripts to 2,300 Elsevier journals; 1.3 million reviewers support the peer review process and 350,000 articles are published. The submission and publication process is a huge task for editors, authors and reviewers, and an editorial system that can manage it well for all users is vital to ensure timely publication of high quality articles.

We have spent the last couple of years working on a new proprietary editorial system for Elsevier, called EVISE®. By October 2016, we aim to have all Elsevier journals running on EVISE, supporting an improved user experience, improved editorial speed and increased quality content.

But why change the current system, and how will this help editors?

Authors, reviewers and editors have been using the Elsevier Editorial System (EES) for the last 13 years to submit manuscripts and manage submissions. In the early days, EES was new and functional, meeting the needs of its users. But as time went on, our journal portfolio grew and more users were relying on the system. User needs were changing, but it was becoming more and more cost prohibitive and technically very challenging to re-engineer EES. The gap between our editorial system and those of our competitors was widening, and we needed to make sure our users were getting the best system possible. 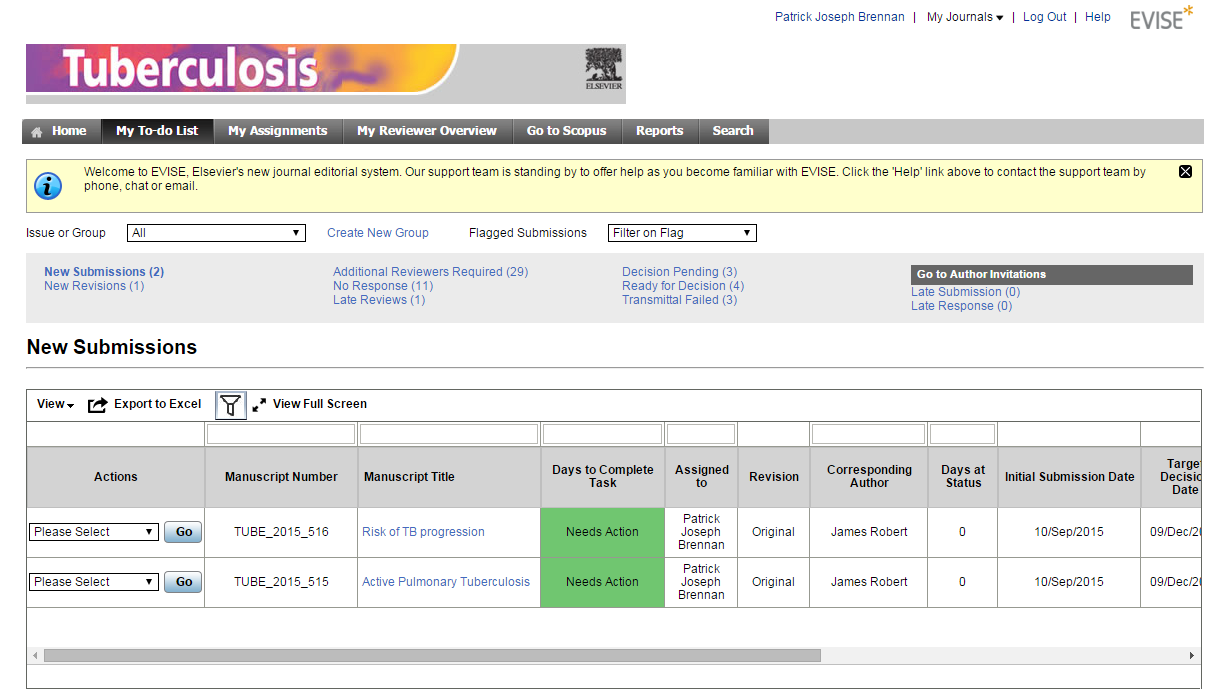 We could see a great opportunity to design and build a system that could integrate seamlessly with Elsevier’s other researcher-facing platforms, including Scopus, ScienceDirect, Mendeley and Elsevier.com. This integration means we can provide a single sign-on for all users, significantly improving researcher efficiency and effectiveness.

One of the big challenges for editors is finding the right reviewers. In EVISE it will be possible to look beyond the single journal. Journals can build clusters and define access to their lists between themselves, helping to create high quality pools of reviewers. By default, editors will see only details of reviewers connected to their own journal, but it will be possible to see how active reviewers are across the whole of EVISE. This will allow for better review task assignment; for example, if a potential reviewer is already performing six reviews across other journals (details not given), it may be wiser to invite a different reviewer.

Integration will save editors time, too: many editors have several different roles with various journals, on editorial boards and as authors and reviewers, making single sign-on even more valuable for them. When an editor logs in, they will see their whole profile: they will see their ‘my to do list’ as a menu item, showing all their outstanding activities as an editor. The traffic light system shows editors the status of different manuscripts, helping them prioritize easily.

It’s important to get the most out of all this new functionality, so our team of 20 EVISE trainers is introducing editors to the system. The same team has also developed an e-learning platform: a very intuitive online platform for reviewers and authors, and perfect for editors unable to join the individual training sessions. It’s also helpful for Elsevier’s publishing teams, which support editors using the system. Editors can register on EVISE for further details and support.

The challenge of developing a new platform

Working on EVISE is exciting, challenging and interesting; it’s been a long road, taking a couple of years to get off the ground properly, but now that we’re rolling out the program we can really see the impact it’s having. We released the beta version of EVISE almost two years ago to a small pocket of journals. Releasing such an early version was not without risk, but we wanted to hear from the users and we got some very interesting feedback. We worked with around 20 journals on a daily basis to channel their feedback into future releases and improve the product.

In April 2014 we released the gamma version (release 1.0) of EVISE, which was an improvement on our earlier release but the functionality was still quite limited; it’s almost like building a very basic car without the sat nav/GPS, sixth gear and fuel efficiency. Building a product like this takes time and you need to release something to make sure you’re on the right track. We worked very closely with editors on our advisory board, and really road tested the system.

During the past year we have added more functionality in four releases, culminating in this year’s version 1.5 in August, which supports a significant number of journals. We are now ramping up rollout, and we are in the process of deploying the majority of journals to EVISE. We have a deployment team, training team and a large journal production organization, all working in tandem with product management to on-board journals to EVISE. The user experience remains key and drives product development at all times; the support organization is set up to channel this feedback to the EVISE® Product Management team.

Adrian Tedford has been with Elsevier for 19 years, joining the company as a Desk Editor, but moving into quality and training roles before taking responsibility for the Elsevier Editorial System (EES) training function in 2004. After supporting roll-out of over 1,500 journals to EES, Adrian moved into a Customer Service management role in 2006, establishing a centralized global department handling all journal editorial and production queries for all researcher groups. Adrian has been actively involved with EVISE since 2012, initially in combination with Journal Production responsibilities in France, Spain and Netherlands. Adrian is now accountable for EVISE deployment, training and support functions but also EES, which will ultimately be replaced by EVISE.

Darren Sugrue says: September 24, 2015 at 12:13 pm
We are actually introducing a submission app at the year end, but it will be piloted with Heliyon before rolling out to additional journals. So the answer is ‘yes’ but most likely next year.

Bonn Jonyo says: September 24, 2015 at 11:27 am
Great team. How can I join the Editorial team as a reviewer with you? I am currently pursuing my Doctorate in Business Administration (Leadership) at United States International University-Africa, Nairobi-Kenya. I am a Grant Writer with experience in organizational development.

Darren Sugrue says: September 24, 2015 at 11:38 am
Dear Bonn, Please visit this page where we offer advice on becoming a reviewer:http://www.elsevier.com/reviewers/becoming-a-reviewer-how-and-why

Bruce Bridgeman says: September 25, 2015 at 5:00 pm
Will EVISE allow blind copies of reviews to be sent to other reviewers, without revealing their identities? At present my journal manager has to do this by hand.