The Brazil the ants have made

The paths of animals and humans coincide far more than once observed – a realization that gave rise to the field of environmental history in the 1960s. In his article “Into the bowels of tropical earth: leaf-cutting ants and the colonial making of agrarian Brazil,” published in the Journal of Historical Geography, geographer Diogo de Carvalho Cabral explains how native leaf-cutting ants impacted his country. His article won the journal's 2015 Best Paper Prize.

Here, Dr. Cabral writes about this phenomenon and what inspired him to write about it. 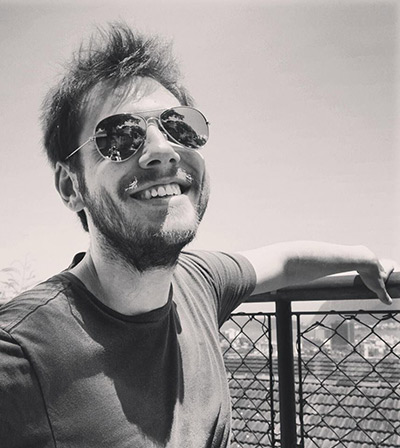 That animals change their environment is a lesson long taught by ecologists and biogeographers. That these changes in turn deeply affect the human world, however, is a lesson we only recently started teaching – even though we were not very confident about it.

The sub-discipline of environmental history, which developed at the interface of history, geography, ecology and anthropology from the 1960s on, has been instrumental in this methodological empowerment of nonhumans.

In Brazil, where environmental history is a recent development in comparison with the United States and Europe, Warren Dean’s With Broadax and Firebrand: the Destruction of the Brazilian Atlantic Forest was a crucial milestone. Although relatively neglected by Brazilian geographers, the 1996 Portuguese translation of the book (A Ferro e Fogo: a História e a Devastação da Mata Atlântica Brasileira) inspired a whole generation of scholars to investigate the forces that have shaped the interwoven fate of landscapes and peoples in the coastal forests. 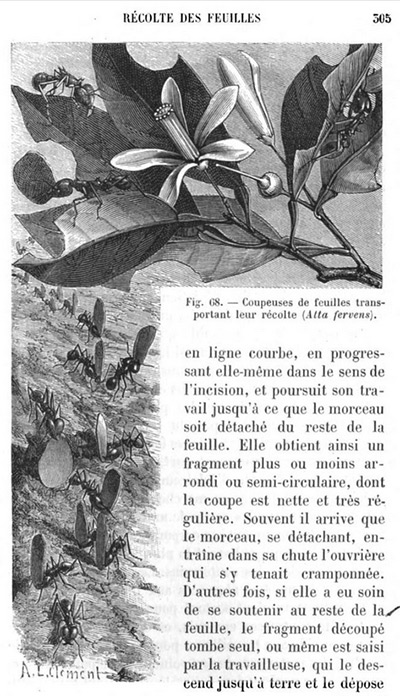 I was among them. Unfortunately, I’ve only discovered the book in 2001, when Dean had already passed away (1994) – so all my critical engagement with it since then has remained unanswered. Still an undergraduate at the time, I was being trained as a human “spatial” geographer in the late 20th-century Brazilian style: with almost no analytical concern for the biophysical environment. Of course I came across human-environmental readings here and there – including work by previous generations of Brazilian scholars, such as Alberto Lamego, Aziz Ab’Saber, Nilo Bernardes and Orlando Valverde – which reinvigorated my elementary, pre-college understanding of the discipline as the study of what we used to call “man-earth relationships.” Despite little encouragement from my teachers – most of whom reinforced the human-physical divide – it’s a geographic tradition I’ve come to embrace as a primary line of research. And it happened that way in part thanks to the reading of Dean’s With Broadax.

I remember being dazzled by his analytical and narrative ability to place human society inside nature and, conversely, to portray nature as a human laboratory (in the case of Mata Atlântica, a very messy and reckless one). Broadax also sparked my interest in historical studies, something I could easily pursue under the advisement of Mauricio de Almeida Abreu, Brazil’s foremost historical geographer, who unfortunately passed away in 2011. Although not directly interested in environmental topics, Abreu had been doing systematic research on Rio de Janeiro’s past geographies in Brazilian and European archives for several years. At the Federal University of Rio de Janeiro, I drew heavily on his expertise in my early attempts of deepening certain stories advanced by Dean.

One of Dean’s most provocative arguments is about the role of leaf-cutting ants in the colonial agrarian settlement. According to him, this group of social insects comprising the genus Atta and Acromyrmex, both endemic to the Neotropics (basically the South and Central Americas plus the Caribbean), severely constrained the Portuguese and neo-Brazilian agricultural settlement in the early centuries, when farmers had no efficient methods for controlling them. 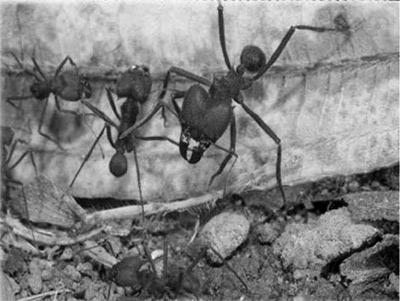 Living in underground nests, these socially organized ants – with complex division of labor among the population of individual nests – cut leaves, flowers and other plant tissues on the surface to use them as a kind of “organic soil” for cultivating a fungal species on which they feed. While pioneering and ingenious, Dean devoted only a few pages to this analysis, using 1970s and 80s biological literature. My idea for the article published in the Journal of Historical Geography was to build on more recent entomological and environmental research, taking Dean’s argument as far as it could go – i.e., making ant history part and parcel of Brazil’s social and agrarian history.

That meant diving into the world made by leaf-cutting ants in collaboration – and conflict – with human land users. Although the ants also harvest native plants such as cassava, the Eurasian plants brought by the Portuguese were particularly appetizing to them. Vines, pomegranates, lemon trees, orange trees, sugar cane, among others, were easy prey because they did not produce certain secondary metabolites (i.e., organic compounds not directly necessary for plant growth, development and reproduction), which defend many native species (mainly mature forest species) against leafcutters’ attacks. Grown on cleared forests, these plants took on the role of the native pioneer species that the ants traditionally enjoyed; thus the settlers’ fields, constantly harassed by weeds (native pioneer plants), became a mix of species especially attractive to ants.

The indigenous inhabitants of Brazil knew how to deal with saúvas, as these ants were natively called. The Indians used to eat içás (female ants that come out to mate), which continues to be a delicacy in today’s rural Brazil. Last spring, a newspaper reported that bottles filled with ants (actually, only the back of their bodies, which are high-fat expanded abdomens) were being offered for sale on the Internet. 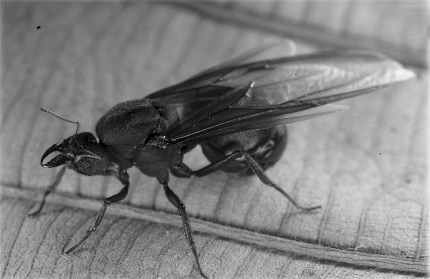 In September, the revoadas swarms will begin, blackening the sky in some places: that's when the nests send out their reproductive ants (males and females, both winged) to mate and create new nests elsewhere. Like the ancient Indians, today’s Brazilians take this opportunity to capture female ants. And then and now, this human predation was not able to control the ant population. But pre-Columbian Amerindians had developed many ways of mitigating the ants’ deleterious effects. Among their methods were the use of natural repellents excreted by certain palm trees and other species of ants, as well as the leafcutters' own waste placed around cultivated plants.

The Portuguese and neo-Brazilian agricultural fields were more difficult to protect. They were much larger monocultures of domesticated plants with no chemical defences against leafcutters. Brought from Madeira, Portugal, in the 1530s, sugarcane soon became the major export staple of Brazil. Like other species brought by the colonizers, this Southeast Asian grass (Saccharum officinarum) was vulnerable to ant defoliation. In conditions that enable them to properly install their nests, the ants harvest cane leaves with great tenacity: a mixed population of Atta capiguara and A. laevigata, with a nest average density of 2.4 per hectare, could take up to four tons fresh weight per hectare per year.

However, when analyzed in finer scales, Atlantic Forests’ environmental conditions are not always favorable to nest development and functioning; indeed, as one would expect, the colonial sugar economy developed mostly where they are not. In general, these conditions were established by the poorly drained soils of river valleys and coastal plains, where the water table constantly threatens ant nests with drowning. As noted by Dean, this helps explain why periodically flooded areas could be cultivated permanently. But a closer examination of more recent scientific findings reveals even more important ecological relationships. Regionally called massapé, especially in northeast Brazil, muddy, organic clay soils are not suitable for deeply excavated nests such as those of most Atta species because of insufficient aeration in the wet season and excessive exposure in the dry season. At the same time, and despite some inconveniences – such as the difficulty of crossing the quagmire with oxcarts – it was simply the best Brazilian soil for growing sugarcane.

Most other farmers were not so lucky, their crops being vulnerable to leafcutters no matter the soil conditions. What they could do was to move their fields as soon as infestation started, a few years after the initial clearing. Thus farmers were periodically felling and burning mature or semi-mature forest for growing their crops. The problem is that – unless new or primary forest was incorporated into the system – the faster the clearing cycle, the less developed the vegetation would be, creating an ever more favorable habitat for leafcutters. This was basically what happened in the 18th century, when a gold and diamond rush attracted hundreds of thousands of people, including enslaved Africans, to the interior highlands of the Atlantic Forest biome. Since individual nests regulate the composition of their populations (the proportion of gardeners, nurses, loaders, soldiers, etc.) according to environmental circumstances, growing availability of spatially concentrated plant resources may have induced more “warlike” nests, i.e., increased production of soldiers at the expense of other worker castes.

In any case, it is clear that the increased presence of humans and their agroecosystems has entailed changes in the world of leaf-cutting ants which in turn reverberated back to humans. Comparable to what is seen today in the Amazon basin, anthropogenic deforestation and the formation of increasingly fragmented forest landscapes resulted in habitat expansion for leafcutters in the 18th century. This outbreak had the effect of reinforcing the itinerant character of colonial agriculture, since ant infestation forced farmers to abandon recently-cleared lands – even though the soil was not yet chemically depleted.

Historical-environmental accounts such as this one show that native Brazilian lands were not lifeless surfaces waiting for the spreading of European settlement. Rather than the blank background in colonial cadastral maps, they ought to be conceptualized as vibrant life-sites in whose bosom anciently settled and newly arrived species and cultures negotiated their coexistence.

The Journal of Historical Geography awards an annual prize to the author of the best paper published in the journal during the previous 12 months. The prize is intended to encourage, celebrate and recognize high-quality work published in the field of historical geography.

Co-Editor-in-Chief Dr. Christian Brannstrom, Professor and Director of Environmental Programs in the Department of Geography at Texas A&M University, commented:

Cabral’s article moves between the very small — leaf-cutting ants — and the very large — Brazil's Atlantic Forest — while advancing knowledge on human-environment interactions in colonial Brazil and beyond.

Nelson’s paper innovatively re-walks the 1850 walk that Olmsted took in England in 1850, intertwining the physical experience of walking with the close reading of Olmsted’s work. Norcup sheds new light on geographical knowledge by recovering a counter-canon of anti-racist scholarship from the 1970s. And Morgan's paper offers new perspectives on how people understood floods in early modern England by interrogating sources from popular print to the minutes of the sewer commissioners.

An international quarterly, the Journal of Historical Geography publishes articles on all aspects of historical geography and related fields, including environmental history. Themes include:

Read more on the journal home page, and visit the Geography, Planning and Development portal to access articles online.

Dr. Diogo de Carvalho Cabral is a geographer of the Department of Geography in the Brazilian Institute of Geography and Statistics (IBGE), based in Rio de Janeiro. In his doctoral dissertation, at the Federal University of Rio de Janeiro (with a visiting period at the University of British Columbia), Cabral tried to tell a history of Portuguese America from the point of view of the Atlantic Forest ecology. It was the germ of Na Presença da Floresta: Mata Atlântica e História Colonial (In the Presence of the Forest: Brazilian Atlantic Forest and Colonial History), his first book, published in 2014. More recently, he has been studying the role of literacy in colonial land-change processes, in addition to investigating, together with other IBGE researchers, the possibility of building a Historical GIS portraying the evolution of Brazil's territory, environment and society.