Remembering the dreaded summers of polio

October 24 is World Polio Day, but it also marks two of the most important milestones that changed the course of the disease: the 100th anniversary of Dr. Jonas Salk's birth and the 60th anniversary of the Salk polio vaccine trials, which involved more than 1 million children. In 1955, Dr. Salk's vaccine would be announced to the world as safe and effective, saving countless lives. But it would take two vaccines and two fiercely competitive NYU medical school graduates — Dr. Jonas Salk and Dr. Albert Sabin — to eradicate polio in the United States.

Drs. Salk and Sabin will be honored at NYU Langone School of Medicine's 5th Annual Innovations in Healthcare Symposium tomorrow and Friday, October 23 and 24. Pulitzer Prize-winning historian Dr. David Oshinsky of NYU is helping to organize the symposium and will be a moderator.

Here, Dr. Oshinsky, who as a child lived through the epidemic at its peak, writes about the world of polio and how it relates to the public health threats we face today. [divider] 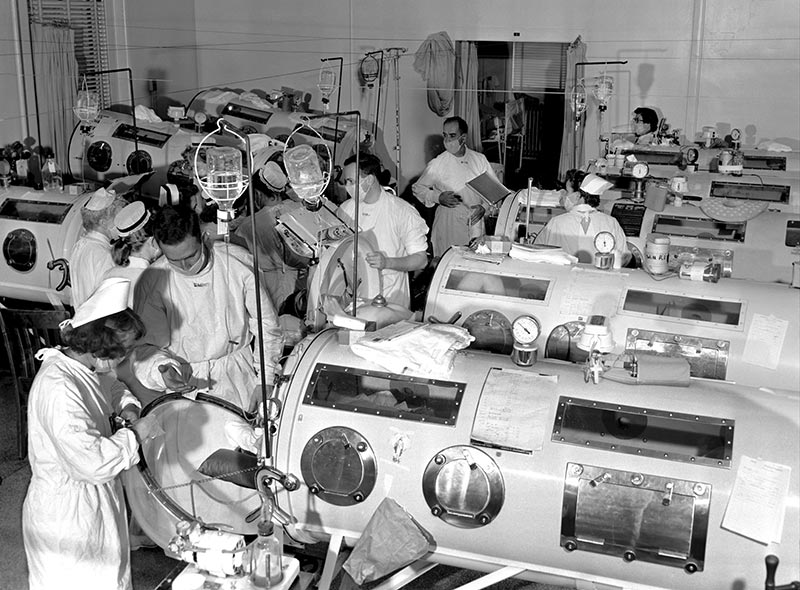 Every summer, a tremendous fear would descend. 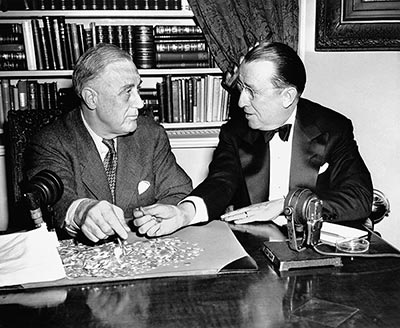 Tens of thousands of children in the United States would fall ill with paralytic poliomyelitis, also known as infantile paralysis. The major outbreaks would start around Memorial Day and become more and more prevalent, spiking in August before essentially ending for the year around Labor Day. Not everyone who contracted the virus would come down with a severe case of polio, but they would be carriers. Those with severe cases that survived were in iron lung respirators and often crippled for life, and many who could return to school came in wheelchairs or leg braces.

For reasons that are still not fully understood, polio would hit certain areas harder than others, and the following year it would show up in other areas. There was no rhyme or reason, and no one knew how polio was contracted, although many believed it traveled through the water. Beaches and swimming pools were closed. Bowling alleys and movie theaters closed. Families left the city. The slightest illness in a child would cause a parent to panic. We know now that it is transmitted via oral-fecal contact.

There was no cure and no vaccine; every child was vulnerable to polio.

But it was this very fear and panic that mobilized the nation to raise money to find the vaccines. With the support of the media, President Franklin D. Roosevelt, who contracted polio at age 39, convinced the world that he could still be a strong leader from his wheelchair. He founded the organization we now know as the March of Dimes. Originally named the National Foundation for Infantile Paralysis, FDR's organization had one goal in mind: produce a polio vaccine. They would do this by raising money and awarding grants to the best medical researchers in the field regardless of age, race, gender or religion. 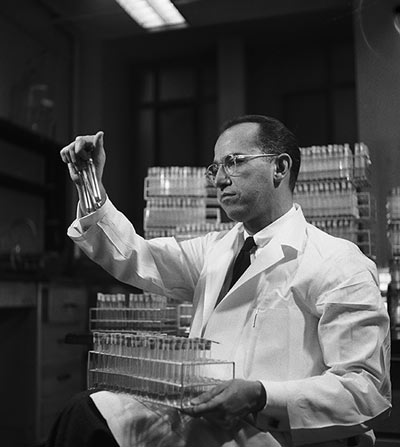 Dr. Jonas Salk and Dr. Albert Sabin both went to NYU Medical School – and it's no coincidence. At the time, there was anti-Semitism in the medical community; some schools had "Jewish quotas," and would accept a limited number of Jews, usually very few. NYU was one of the few schools that did not have a quota, and it became a haven for young, Jewish medical students like Salk and Sabin.

Separated by seven years, these two scientists competed fiercely to develop the better vaccine. Salk's inactivated poliovirus vaccine (IPV), a killed-poliovirus injection, came first, dramatically bringing the number of reported polio cases in the US at the height of the epidemic in 1952 down from more than 57,000. By 1960 there were 2,525 reported cases in the US.

Then in 1962 came Sabin's oral polio vaccine (OPV), a live-virus oral formulation, and the numbers declined further to 61 cases by 1965, according to the Immunization Action Coalition. Less expensive and easier to administer, Sabin's oral vaccine has made it possible to get vaccines into parts of the developing world, but because there is a very rare chance of contracting polio from Sabin's vaccine (approximately one in 750,000), we will always need Salk's injection to eradicate the disease completely. What we find after they are gone is that we need the contributions of both scientists, who were in a bitter rivalry, to end polio. 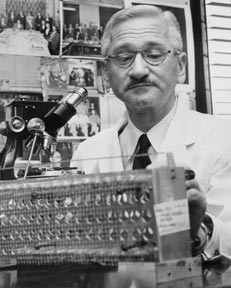 World Polio Day couldn't be more timely as we face Ebola, a deadly virus with no vaccine to protect against it. During the polio epidemic, there were many more children who contracted polio than will ever come down with Ebola in the US. But Ebola reminds us of the early days of polio when we felt so vulnerable. Ebola reminds us that we need to keep the global public health discussion around vaccines alive.

It is possible to end polio globally. Through a concerted effort, the Indian government together with public health officials, religious officials, the World Health Organization, the Gates Foundation and The Rotary Foundation, decided to end polio, and now India is polio-free. But there are still places where there are barriers to vaccines due to political turmoil, apathy, and resistance to vaccination, and polio continues to kill, such as Pakistan, which is experiencing a record number of cases this year.

Vaccines have saved more lives than any other medical intervention, but infectious diseases can and have returned. Since the days of the polio epidemic, new viruses continue to pose a public threat including HIV/AIDs, avian flu, enterovirus D68, and now Ebola. Mother Nature will always be one step ahead of us. On the 60th anniversary of the Salk vaccine trials – the largest scientific experiment in history – it's good to remember.

NYU Langone School of Medicine's 5th Annual Innovations in Healthcare Symposium will honor Dr. Jonas Salk and Dr. Albert Sabin tomorrow and Friday (October 23 and 24). Leaders in medicine and public health will be joined by Dr. Salk's son, Peter L. Salk, MD, President of the Jonas Salk Legacy Foundation; and Dr. Sabin's daughter, Debbe Sabin, NP, a retired nurse practitioner. Organizers say the symposium will "assess where we stand with cutting-edge vaccines such as rotavirus and HIV, and barriers to vaccines" and "facilitate a frank discussion with world leaders about the future of vaccination and public health." Learn more.

The opening panel, "Session on Ethics: What Ought to be Done to Overcome the Anti-Vaccine Trend," is about vaccine refusal and hesitation, a huge component of the recurrence of measles, mumps, pertussis and other vaccine-preventable diseases. What can be done to combat this problem?  What educational, legal and policy efforts are most likely to persuade individuals and parents to accept vaccinations as very safe and effective?

Dr. Paul A. Offit, MD, will talk about "The Philadelphia Measles Panic of 1991: Lesson from the Past or Predictor of the Future?" Dr. Offit, co-editor of Vaccines, 6th Ed. (Elsevier), is Chief of the Division of Infectious Diseases and Director of the Vaccine Education Center at the Children's Hospital of Philadelphia, and is the Maurice R. Hilleman Professor of Vaccinology and Professor of Pediatrics at the University of Pennsylvania School of Medicine. Panelist Jason L. Schwartz, PhD, Harold T. Shapiro Fellow in Bioethics at the Princeton University Center for Human Values, will talk about "Equity and Non-Medical Exemptions from Vaccination Requirements. And Seth Mnookin, Associate Director Graduate Program in Science Writing at MIT, will discuss "What is Known and What is Not: Vaccine Communication Strategies." The session will be led by Arthur L. Caplan, PhD, Drs. William F. and Virginia Connolly Mitty Professor and Founding Head of the Division of Bioethics at New York University Langone Medical Center.

Elsevier has made the following articles freely available until January 22, 2015:

The following research studies and commentaries in Elsevier journals are published open access:

Salk's inactivated polio vaccine (IPV), consists of killed poliovirus strains of all three poliovirus types and is given by intramuscular injection. IPV produces antibodies in the blood to all three types which, in the event of infection, prevent the spread of the virus to the central nervous system and protect against paralysis.1 An enhanced-potency IPV was licensed in the US in 1987, and is currently the vaccine of choice in the US.2

Sabin's oral polio vaccine (OPV), also called "trivalent oral polio vaccine," is a mixture of live, attenuated (weakened) poliovirus strains of all three poliovirus types and is given orally via a dropper on the tongue. OPV works by putting weakened live-virus strains into the system, producing antibodies in the blood to all three types of poliovirus. In the event of infection, these antibodies protect against paralysis by preventing the spread of wild poliovirus to the nervous system.1

To eliminate the risk of vaccine-associated paralytic poliomyelitis (VAPP), as of January 1, 2000, OPV was no longer recommended for routine immunization in the US. However, OPV continues to be used in the countries where polio is endemic or the risk of importation and transmission is high.3

Dr. David Oshinsky is a Pulitzer-prize winning historian and Director of the Division of Medical Humanities at the New York University School of Medicine and Professor in the New York University Department of History. Previously, he was at the University of Texas at Austin, where he received the university's Raymond Dickson Centennial Teaching Award. He graduated from Cornell University and obtained his PhD from Brandeis University.

His books include A Conspiracy So Immense: The World of Joe McCarthy, which won the Hardeman Prize for the best book about the US Congress, and Worse Than Slavery, which won the Robert F. Kennedy Prize for distinguished contribution to human rights. His latest book, Polio: An American Story, won the Pulitzer Prize in History and the Hoover Presidential Book Award.