Dr. Bimol Krishno Das is a pharmacist in Rangabali, Bangladesh. In 2015, he wanted to buy and run a nebulizer — a machine that allows patients with respiratory conditions, particularly children, to breathe in medication. This isn’t easy when power is hard to come by, unreliable and expensive. His situation was far from rare, with about 60 million people without electricity at home or work in Bangladesh.

Dr. Bimol’s challenge was exactly what an innovative startup called ME SOLshare aimed to solve with its solar energy trading platforms that help bring affordable solar electricity to people in Bangladesh and beyond. Supporting work by organizations like this was why Elsevier and the International Solar Energy Society (ISES) launched the Renewable Transformation Challenge (RTC).

Check out the guidelines and submit via the Challenge homepage. The deadline has been extended to May 14. 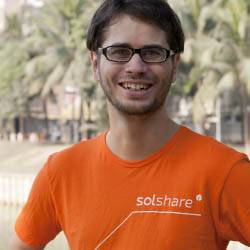 The RTC was launched in 2017 to encourage progress toward a world powered by renewable energy and accessible energy for all. Inaugural winner Dr. Sebastian Groh, Managing Director of ME SOLshare, said the award, with its prize of €20,000, helped his team expand and strengthen their reach at a critical time:

The award has helped SOLshare gain traction within the energy community, including the scientific one. This allowed us to increase our working partnerships with both investors as well as other organizations working with renewable energy.

A collaboration between Elsevier and ISES, the challenge grew out of their decades-strong relationship publishing the journal Solar Energy. Founded in 1957, the journal is a leader in the field, focusing on solar energy research, development, application, measurement and policy. Solar Energy has published thousands of papers providing the scientific basis and developmental roadmaps for companies like ME SOLshare.

ME SOLShare itself was founded based on the results of two PhD theses that laid out the framework on how energy access solutions should be designed, Dr. Groh said. The model was developed on the campus in the Stanford Ignite business innovation program of 2013.

The Solar Energy journal has a long history of publishing this sort of work, and with the RTC, ISES and Elsevier, SOLShare looked to expand their support to real-world solutions with further input from the world of academia, Dr. Groh said:

The aim is to create efficient and dynamic local energy markets that empower households and encourage solar entrepreneurism, starting in Bangladesh, followed by India before the end of this year and eventually on a global scale. In order to be able to do this we constantly have to question our approach and model. Therefore, we are closely collaborating with a range of universities ranging from Harvard, MIT in the US to North South University, as well as BRAC and United International University in Bangladesh.

Upon winning the 2017 RTC, The Energiewende 3.0 – Smart P2P Solar Grids was described by ISES President Dr. David Renné as “groundbreaking work” and a step in the journey “toward achieving 100 percent renewable energy globally.” The project proves how effective business models can provide reliable and clean energy access.

Realizing the potential of solar power in Bangladesh 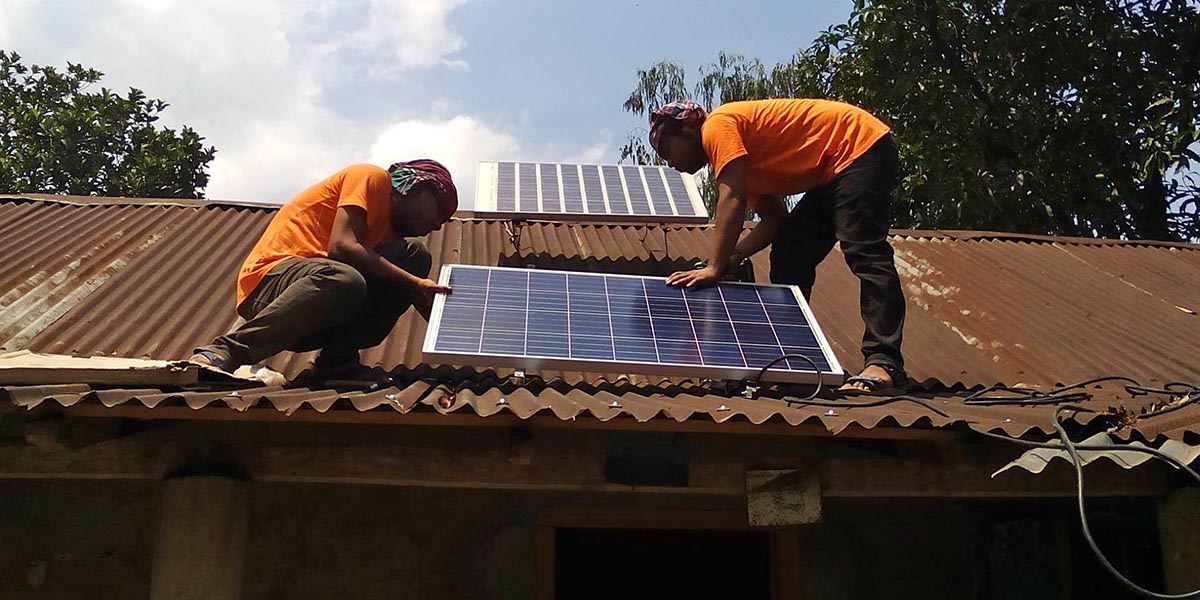 ME SOLshare started in Bangladesh, a country with a rare combination of a high density of solar home systems (about 5 million) and high energy poverty. The uneven link between the production of electricity from solar sources and those in need of energy created a surplus of 300,000 kWh of daily excess energy in Bangladesh — wasting enough to boil water for 12 million cups of tea every day. Add to the mix some particularly difficult geography preventing remote island villages from linking to the grid, and the task of raising millions out of energy poverty in the region is daunting.

However, despite the high levels of energy poverty, Bangladesh also has a smart-connected population, with citizens using small local grids and mobile money to set up and trade energy. These difficult conditions provided an opportunity to help at least some of those millions suffering from energy poverty – and that’s where ME SOLshare came in. 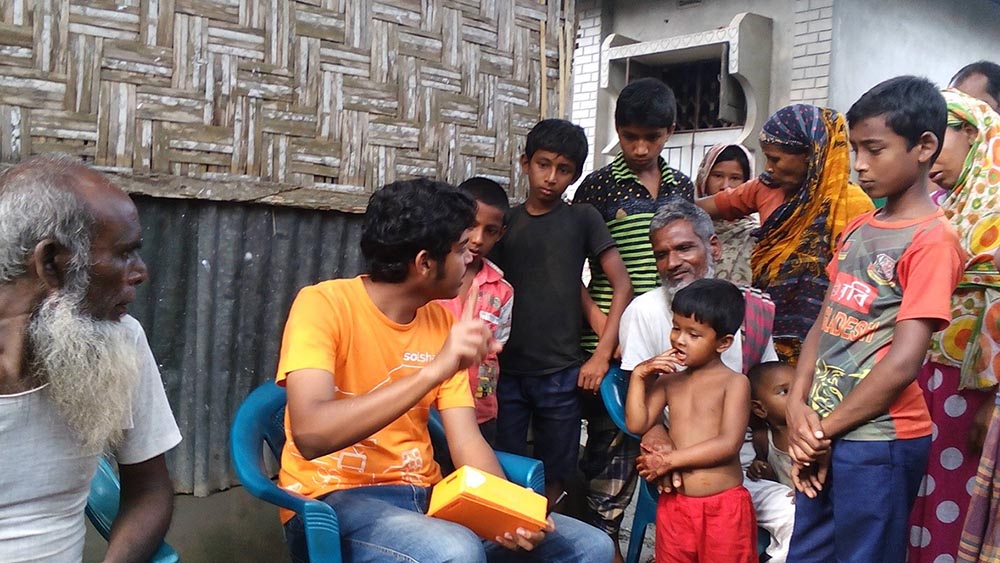 A SOLshare grid is created when rural households or small and medium enterprises (SMEs) agree on setting up a “swarm network” that consists of existing and new solar home systems and storage devices and enables the interconnection of larger loads. ME SOLshare provides a peer-to-peer solar energy trading platform empowering individuals and SMEs to become solar entrepreneurs offering pay-as-you-go and cash-in-as-you-go electricity solutions to low-income households.

By turning what was previously wasted excess solar energy into a commodity, ME SOLshare empower communities to earn direct income from the sun. This helped Dr. Bimol set up the nebulizer he needed for his practice.

ME SOLshare is a success organization that continues to grow. In November 2017, they were able to install their very first E- Rikshaw charging station in Panchagorh. Since that day, Dr. Groh said, SOLshare has “successfully installed around 25 P2P solar microgrids through which we are powering 1,500+ beneficiaries.”

Since 2017, other organizations have followed the lead of Elsevier and ISES to recognize ME SOLshare’s work; they were crowned the World’s Best Energy Start Up in 2018, and the World Economic Forum put the organizsation into their Technology Pioneers Cohort of 2018, joining the likes of Spotify, Twitter and Wikipedia.

With the 2nd Renewable Transformation Challenge now open to applications, Dr. Groh was asked to give advice to future applicants. Here’s what he recommends:

"Really reflect on the work your organization is doing. The main feature of this award is about transformative renewable energy technologies that are improving lives and livelihoods, and this needs to be crystal clear in the application. What kind of dramatic change are you trying to bring about? And if you are successful, what will this new world look like?" As Senior Publisher for renewable and sustainable energy journals at Elsevier, Adam Fraser publishes research advancing our understanding of clean and affordable energy for all in journals such as Renewable Energy and Solar Energy. Adam previously worked as a publisher for psychology and cognitive sciences, having joined Elsevier from Wiley in 2014. He lives in London. 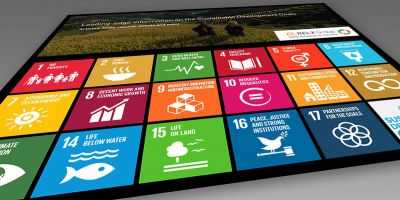 7 ways you can use our SDG Resource Centre 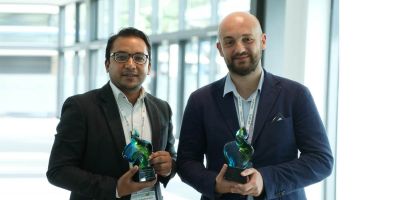 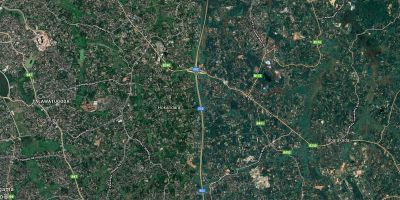