Is peer review just a crapshoot?

How do reviewer recommendations influence editor decisions? And are Chinese authors treated fairly? 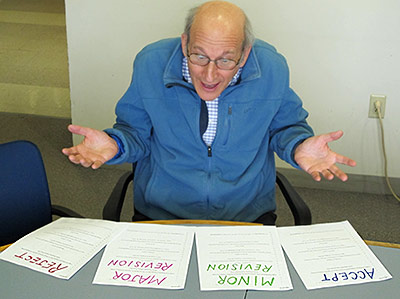 An important concern in the scientific publication process is how well reviewers evaluate the quality of papers and how their recommendations influence editors’ decisions to accept or reject papers. Are there some comprehensible patterns in the review process or is it just a crapshoot — a random process with reviewers and editors making arbitrary decisions?

Additionally, a particular concern for researchers in China and other countries with rapidly developing scientific communities is whether there are potential biases affecting their manuscripts in the review process. Do editors treat authors from China fairly, or are their papers given an especially harsh treatment?

Right from the beginning, we could see that Chinese authors face special difficulties in getting their papers published: 71% of the papers from China were rejected without review in contrast to a far lower 50% of papers from English-speaking countries. Although identifying the causes of the higher rejection rate was beyond the scope of our paper, the reasons are probably due to a combination of the topics being less relevant to the journal, lower quality of research work, and less effective presentation of the material. 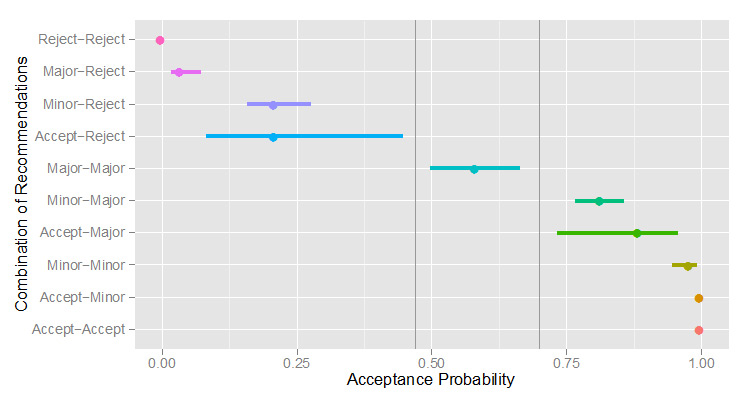 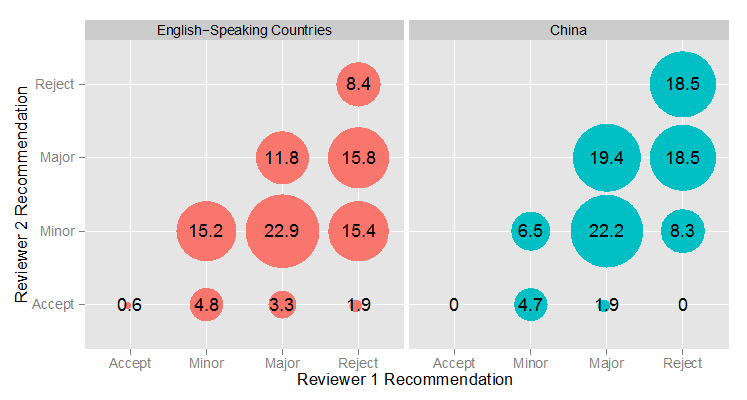 Reviewer rejection as the “kiss of death”

Variability of reviews has a negative outcome 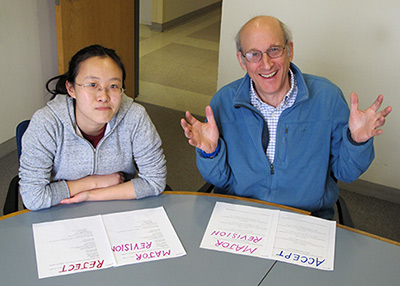 We found no evidence of editor bias against papers from China when receiving the same reviewer recommendation; however, reviewer recommendation for papers from China had a greater degree of agreement than did reviewers of papers from English-speaking countries (e.g., intra-class correlation of 0.25 vs. 0.55), due to reviewers of papers from China often agreeing that papers should be rejected or require major revision. The significant agreement between pairs of reviewers who are reviewing the same paper (as reflected by significant intra-class correlations) for papers from both China and from English-speaking countries indicates that reviewers are able to determine the quality of the paper using objective and repeatable criteria. However, the fact that these correlations are much lower than 1.00 also indicates that most of the time the two reviewers of the paper are coming up with different opinions on the quality of the paper.

Our results demonstrate that the review process is not a crapshoot; reviewers are providing useful information and editors are using this information to make reasonable decisions. Authors from a non English-speaking country such as China have a tougher time getting their work published, but this is not due to a negative bias by reviewers from English-speaking countries or editors. The next step in evaluating the review process might be to examine the usefulness of the extensive comments of the reviewers in the decision-making progress. And also, more attention needs to be devoted to supporting scientists from China and other developing countries to help them reach their potential in carrying out and publishing their research.

Elsevier has made this article freely available for six months, until September 24, 2015:

Campos-Arceiz, A, Primack, RB, and Koh, LP: “Reviewer recommendations and editors’ decisions for a conservation journal: Is it just a crapshoot? And do Chinese authors get a fair shot?” Biological Conservation (June, 2015)

Dr. Richard B. Primack is Professor of Biology at Boston University and Editor-in-Chief of Biological Conservation, an Elsevier journal focusing on the protection of biodiversity. He is also a Humboldt Research Fellow in Germany and Distinguished Overseas Professor at the Northeast Forestry University in China. Dr. Primack studies the effects of climate change on the plants and animals of Massachusetts using the observations of Henry David Thoreau from Concord in the 1850s as a starting point. This research is the focus of his new popular book titled Walden Warming: Climate Change Comes to Thoreau's Woods.

Dr. Ahimsa Campos-Arceiz (ahimsa@camposarceiz.com) is Associate Professor in the School of Geography at the University of Nottingham Malaysia Campus. He is a conservation ecologist, and his main research interest lies in the behavior, ecology, and conservation of Asian megafauna, especially elephants. He is based in Peninsular Malaysia, where he leads the Management & Ecology of Malaysian Elephants (MEME) research project and works closely with local authorities. Dr Campos-Arceiz’s work is increasingly leaning towards the social sciences because he believes that understanding (and changing) human behavior is the main challenge for tropical conservation science in the 21st century. In his free time, Dr. Campos-Arceiz also enjoys playing with data in side-projects like the one described in this article.

Lian Pin is Founding Director of the nonprofit ConservationDrones.org, Regional Technical Advisor for Conservation International, a TED speaker, Editor-in-Chief of Cogent Environmental Science, and an Editor of Biological Conservation.

He obtained his bachelor's and master’s degrees from the National University of Singapore in 2003. He received his PhD in Ecology and Evolutionary Biology from Princeton University in 2008. He then moved to Zurich for his post-doctoral training at the Swiss Federal Institute of Technology (ETH Zurich). In 2011, he was appointed a Swiss National Science Foundation Professor.