Experts at World Science Festival show why eyewitness testimony can be unreliable, where the science is lacking, and how police can coax people into false confessions 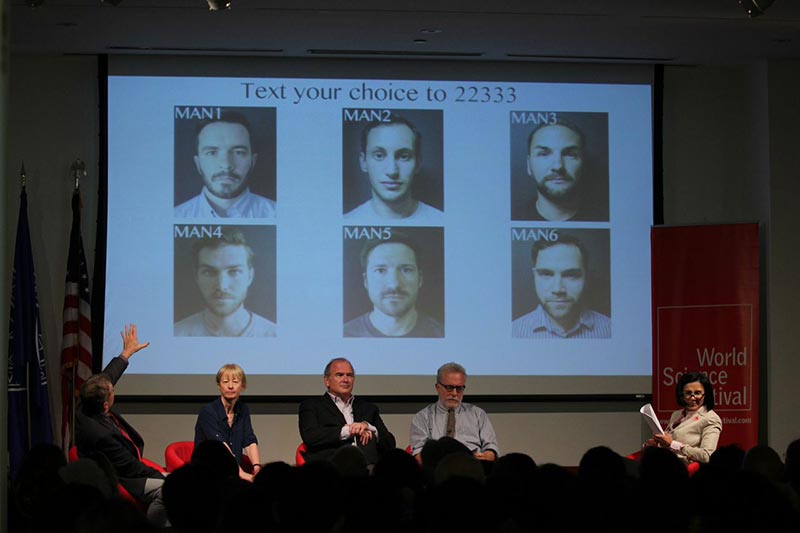 Fans of Law and Order, CSI and Bones are used to seeing cutting-edge science help detectives figure out who committed a crime and prosecutors use eyewitness and expert testimony that leads to guilty verdicts.

In real life it is not so simple. 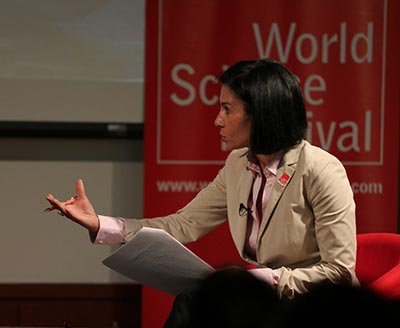 In fact, eyewitness testimony is notoriously unreliable, the science behind fingerprints and blood splattering leaves much to be desired, and false confessions due to police coercion is an epidemic and an insult to our justice system.

This was the message of panelists at event called The Science of Justice: A Matter of Opinion September 10 at the Benjamin N. Cardozo School of Law at Yeshiva University in New York City. The panel was hosted by the World Science Festival in partnership with the New York Hall of Science.

Moderated by broadcast journalist Jami Floyd, the panel consisted of a psychologist, a forensic scientist, two law professors, a Pulitzer Prize winning journalist, and the co-founder of the Innocence Project.

Floyd opened by recounting some recent incidents of science playing a key role in the justice system:

Recent tragedies, both obscure and in the media, underscore the role of science in crime. In the background, even now, science is being used to investigate what happened to Michael Brown in Ferguson, Eric Garner in Staten Island. Science helped us to determine that Victor White in Louisiana was shot in the chest, not in the back as police reported. And science cleared two half brothers in North Carolina after 31 years in prison.

Why is eyewitness testimony so bad?

Peter Neufeld, co-founder of the Innocence Project, said that despite numerous studies showing that eyewitness testimony is unreliable, it is still a major cornerstone of the American justice system.

Ekow Yankah, a law professor at Cardozo Law School of Yeshiva University, agreed. "Unfortunately, what the studies show – it's really stunning – is that the confidence with which people identify somebody has very little correlation at all with the accuracy," he said. "Yet the more confident an eyewitness is the more he is believed. And the prosecution always puts the most confident witnesses on the stand."

Dr. Saul Kassin, a psychology professor at John Jay College of Criminal Justice, explained that our minds are not recorders:

Memory does not work like a videotape recorder. Memory is constructed and reconstructed, so if a witness sees something and they receive some additional information — for example, if I witness a car accident ... and I heard the other witnesses recounting other things they saw about that accident, those extraneous pieces of information may become part of my memory.

Occasionally the police become unwitting allies in this process by prompting an eyewitness to identify a suspect he or she might not be sure of by saying the suspect had a criminal past or "helping" the eyewitness with questions, like "It's him, right?"

Eyewitness testimony, even when mistaken, can have a powerful impact in swaying a jury, Neufeld explained:

If you have ever sat in a  courtroom when an eyewitness testifies and points a finger at the defense table and says, 'I will never forget that face for as long as I live, as God is my witness,' that's the end of the case. It doesn't matter what defense puts on after that. The jury has heard it. They need closure whether or not that witnesses testimony is in fact reliable.

In the middle of this discussion, a man from the audience darted onto the stage, grabbed the iPad away from Dr. Kassin, and ran out of the nearest exit. Audience members watched with their mouths agape, some eying each other as though searching for clues to what just happened.

We were told that the theft was staged and that we would be asked to identify the "perp" at the end of the evening.

Another factor that contributes to the unreliability of eyewitness accounts is the problem many people have in identifying people of other races, a phenomenon that has been confirmed in studies. "People are terrible at cross-racial identifications," Yankah said. "So you can all insert you're own joke about how everybody of some race you're not looks exactly the same. It's a joke and it can be a terrible joke, it can be a mean-spirited joke. But it just happens to be true, right? And it's not because they all look alike — it's because you're terrible at it."

Sometimes mistakes are made due to lack of attention. If you were playing basketball, would you notice whether a gorilla joined in during the game? Dumb question, right? Well maybe not. Dr. Kassin told the audience about the invisible gorilla experiment, where the subjects were asked to watch a video of two teams playing basketball and to count the number of passes made by the white-shirted team. During the game a man in a gorilla costume enters the room, stands in front of the camera, and pounds his chest. Most of the subjects failed to notice the gorilla because they are so focused on counting the number of passes.

But even when we pay close attention, we often get it wrong.

Pulitzer Prize winner and New York Times columnist Jim Dwyer told the story of Jennifer Thompson and Ronald Cotton. Thompson, who was raped in college, swore she would remember every detail of the crime to make sure that the rapist was punished. In 1985, she picked Ronald Cotton out of a line-up. He was sentenced to life plus 54 years for Thompson's rape and that of another woman. Cotton, who maintained his innocence, had his sentence overturned when Bobby Poole, who was in prison for another crime, told fellow inmates he was guilty of the crimes, and DNA evidence proved it to be true.

But along the way, a remarkable thing happened. When Thompson was shown Poole by the authorities, she said, "This was not the man who raped me." For years, Thompson said, despite the DNA evidence exonerating Cotton and Poole's statements implicating himself, she still saw Cotton as the rapist when she closed her eyes.

This case shows how powerful memories, even false ones, can be.

After serving 10 years in jail, Cotton was officially cleared of all charges and released from prison. Remarkably, Thompson and Cotton became friends and wrote a book, Picking Cotton, about their experiences.

Dwyer is the author of False Conviction: Innocence, Guilt & Science, an interactive book produced by the New York Hall of Science that includes videos, interactive games, and multi-media demonstrations so that readers can examine DNA evidence, explore crime scene photos, and even try to match a bullet to the gun that fired it.

Why would a person confess to a crime he or she didn't commit? Even murder or rape? Good question, but people do it all of the time. Sometimes they are tricked by the police, who lie and say they have evidence, such as fingerprints, from the crime scene or that they have an eyewitness who saw them do it. And sometimes a suspect is so tired during a long interrogation that confession is seen as the best option to the relentless interrogation.

This was the case of the Central Park Five, who were found guilty of the brutal rape of the "Central Park jogger" in 1989. The five teenagers were convicted of the attack despite their claim that their videotaped confessions were scripted by the police. We watched a tape of one of the assailants confess. 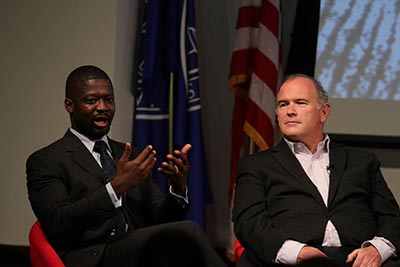 Dwyer said the teenager we saw confess was hard of hearing and learning disabled. "There was no blood or DNA tests tying the teenagers to the crime," he said. "Their confessions were wrong about where, when and how the attack on the jogger took place."

In 2002, convicted rapist and murderer Matias Reyes confessed that he had committed the assault when he was 17 and that he acted alone. DNA evidence confirmed his participation in the crime and identified him as the sole contributor of the semen found in and on the victim. In 2014, the Central Park Five received a $41 million settlement for the years they served in prison.

"Imagine being held for 24 hours in interrogation and hearing that there is evidence that ties you a crime," he said. "Eventually people wear down. They are tired of the questions. They want to rest. It is easy to confess."

Yankah observed that simply being tired can lead to a false confession.

Many of us in the room are accustomed to being treated with some deference. Most suspects aren't treated with deference, especially young people who may have gotten into trouble with the law before. At 20, a person who is used to be telling he is bad by authority figures at home or school is used to no one believing him. And after 24 hours in a holding cell, he is exhausted, confused and simply wants to go home. The suspect is told by the police that if he just confesses he can go home and see his mom. 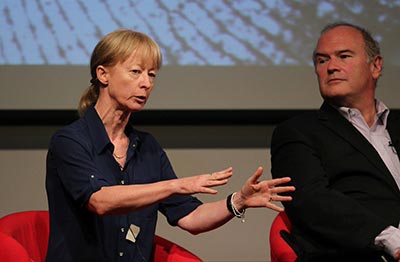 Forensic scientist Dr. Mechthild Prinz said various disciplines produce good data, but the interpretation and assessment of the data's significance – and the quality of the evidence – are key.

While pristine fingerprints are distinct for each individual and can be used to tell virtually everyone apart, partial evidence prints can lead to "associations that are fortuitous," she explained. "Clear interpretation standards, training and statistical assessment are important. And that is what the field is working on right now to make (the use of fingerprints and other pattern evidence) more meaningful."

Neufeld, of the Innocence Project, said our justice system would be better if we stuck to proven disciplines that are consistent with the scientific method, such as DNA profiling, developed in the research and medical laboratories long before it was ever used in a criminal court. "Latent fingerprint comparison and hair and fiber analysis rely on  subjective interpretation, leaving us with often unvalidated and conflicting testimony by experts from the prosecution and defense," he said. "If the science is unassailable, as is often the case with DNA evidence, there is little room for debate."[divider]

Now it's your turn

The evening ended with the audience voting on who the "perp" was who stole Kassin's iPad. We were shown photographs of six suspects, and 83 percent of the audience voted for the wrong man. The suspect who got the most votes was the cameraman taping the panel. You can watch it here and see for yourself.

Watch a video of the panel

This video of the event has been posted by the World Science Festival.

David Levine (@Dlloydlevine) is co-chairman of Science Writers in New York (SWINY ) and a member the National Association of Science Writers (NASW). He served as director of media relations at the American Cancer Society and as senior director of communications at the NYC Health and Hospitals Corp. He has written for Scientific American, the Los Angeles Times, The New York Times, More magazine, and Good Housekeeping, and was a contributing editor at Physician's Weekly for 10 years. He has a BA and MA from The Johns Hopkins University.