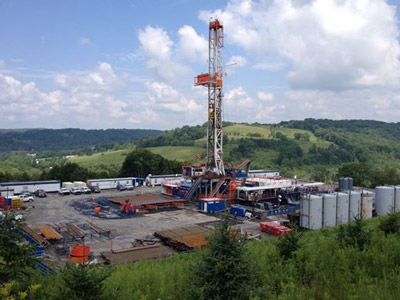 Horizontal hydraulic fracturing has liberated vast amounts of hydrocarbons from shale by injecting fluids at high pressure down narrow well bores. The abundance of natural gas has stimulated tremendous job growth in the oil and gas industry. But, these innovative methods of extraction have given rise to a number of issues. More than ever, worker safety is a top priority.

Even though hydraulic fracturing can be traced back to the 1940s, the process exploded in 2003 with the massive scale of exploration and extraction of natural gas from shale formations in Texas, Pennsylvania, West Virginia, Wyoming, Utah and Maryland.

Jobs related to hydraulic fracturing are growing faster than any other sector in the US workforce. The Energy Information Administration reported a 40 percent increase in job growth, adding 162,000 jobs in drilling, extraction and support for hydraulic fracturing since 2007. In 2013, though, the US Bureau of Labor and Statistics (BLS) reported a 23 percent annual rise in oil and gas fatalities.

Although some of these dangerous hazards plague smaller and mid-size companies to a greater degree, oil and gas companies of all sizes need to stay vigilant and address corporate culture that can lead to unnecessary injuries and accidents.

Hydraulic fracturing requires more than 2 million to 5 million gallons of water per well. According to Susan Christopherson of Cornell University's Green Choices, approximately 890 to 1,340 trucks deliver this water, in addition to silica sand and chemical additives, to the well pad along rural roads that lack firm shoulders or rumble strips.1

More than 410 individual workers are required to bring a single well online, adding even more vehicles onsite, mainly pick-up trucks.2 Not only do frequent trips between well sites increase risk potential, but long hours (12-14 hour shifts), low levels of safety belt use and worker fatigue all contribute to fatal accidents and crashes.

"It is essential that oil and gas companies have a motor vehicle safety program in place," said Kyla D. Retzer, coordinator of the Oil and Gas Safety and Health Program of the National Institute for Occupational Safety and Health (NIOSH). "Those who drive pickup trucks should be a focus and another focus should be seat belt use."3

Southwestern Energy (SWN), the fifth largest domestic natural gas producer, takes the lead in vehicle safety with its Street Smart program, an educational strategy aimed at shifting workplace culture. Over 6,000 SWN employees have pledged to "slow down and keep dust to a minimum." The program discourages distracted driving (texting or talking on cell phones while in the vehicle) and emphasizes seat belt use in all conditions, at all times. SWN also encourages cautious driving by paying their workers by the hour, not the load.

Also, in order to reduce roadway traffic significantly and eliminate up to 800 trucks, SWN consolidates drilling operations, staging eight wells, instead of one, per well pad. By consolidating resources and constructing above-ground water pipelines instead of trucking in water, SWN eliminates an additional 200 to 250 trucks per site.

Up to 4 tons of silica sand are transported to a single well site and pneumatically conveyed into frack sanders. A propping agent that preserves the opening in the shale to release gas, silica sand is moved by conveyor to the blenders where it is mixed into the fracking fluid and pumped into the well during stimulation. Inevitably, the movement of sand onsite exposes workers to harmful particles of respirable silica dust.

"Crystalline silica sand poses one of the most significant known health hazards to workers exposed during hydraulic fracturing," states a 2013 NIOSH study led by Dr. Eric Esswein focusing on the degree to which silica sand exposure is an industrial occupational hazard.4

The National Institute for Occupational Safety and Health (NIOSH) Oil and Gas Safety Programidentified four gaps that create patterns of risk in the absence of education and regulation, based on data from 2003 to 2009.

1. Pickup trucks and the absence of regulations. "More than half of the fatalities are attributed to either the driver or passenger of a pickup truck," vehicles which are exempt from the Federal Motor Carrier Safety Regulations that limit the consecutive hours of driving and specify the number of off-duty hours.

2. Lack of safety belts. "Half of the workers who died were either not wearing a safety belt, or were ejected from the vehicle and presumably, not belted."  Educating workers of the benefits of lap/shoulder belts, when used correctly by light-truck occupants, reduces the risk of fatal injury by 60 percent.

3. Well-servicing companies, drilling contractors and small establishments."Small establishments with fewer than 20 employees often lack dedicated health and safety programs or staff." Workers in smaller companies are at higher risk than those companies that employed more than 100 workers.

Breathing silica dust can lead to lung cancer and silicosis, a fatal respiratory disease, and has been linked to tuberculosis and chronic obstructive pulmonary disease, among others. Silicosis can take 10 to 15 years to present symptoms but, once developed, is incurable. The risks can be transferred to workers' homes through dust collected on clothing and vehicles.

At the 2013 SPE/IADC Drilling Conference, a group of petroleum engineers presented on the development of dust collection systems, targeting sand filling operations as likely sources of dust. With the aim to contain dust at OSHA permissible exposure levels (PELs), dust collection equipment supplements existing equipment to significantly reduce respirable silica sand and the threat of silicosis.5

Resin coating is an alternative to dust control. In 2013, the World Intellectual Property Organization (WIPO) issued a patent for an innovative, self-suspending proppant to Soane Energy.6 Santrol, dubbed the "world's proppant provider," later acquired and developed the innovative technology which, not only increases the surface area of the proppant to yield increased production, but suppresses fine dust with a hydrogel coating.

When exposed to oxygen rich air, hydrocarbons are highly combustible leading to flash fires and explosions. During hydraulic fracturing perforation, the final stage of well completion, a perforating gun detonates a series of targeted explosions, punches holes through the casing and creates the fissures from which gas is extracted, providing a potential ignition source. During completion, hydrocarbons contained in high-pressure shale formations can kick, or flow into the wellbore through the rig platform, leading to loss of well control, or blowout.

Oil and gas workers risk the imminent dangers of explosions and flash fires by nature of working with highly flammable vapors released from wells near ignition sources — open flames, lighting, cigarettes, welding tools and frictional heat. Between 2003 and 2008, the BLS reported 53 fatalities due to explosions and 38 to fire.

Fire-resistant and retardant clothing can reduce injuries and fatalities related to explosions and fires. As of 2012, the National Fire Protection Association required that garments cover the upper and lower body as completely as possible.

"Effective safety ­programs should always aim at eliminating and engineering out the hazard or risk," said Peter Clark, VP of Training, Research & Development at Canadian-based Apparel Solutions International, in a 2013 article for the OGM Pipeline on "Fire-resistant Workwear."

Carhartt, Wrangler and Red Wing use chemistry to add a protective flare to ordinary shell jackets and jeans, creating lines of flame resistant frack wear. Battle tested by soldiers in Afghanistan for a range of thermal, chemical biological and radiation exposure, the U.S. Military drives these innovations and the technology is an example of knowledge sharing across disciplines.7

Pioneered by DuPont, industrial fabrics like Nomex and Kevlar brand fibers protect industrial workers from intense heat and flames as well as decrease burn severity. Safeguarding workers from direct exposure to the flames, the unique fibers swell and thicken, forming a protective barrier between the heat source and the skin that will not burn, melt or drip. Chemically dependent flame-retardant fabrics, such as Indura flame-retardant treated cotton, FireWear and FR rayon, chemically react with heat to extinguish flames, providing precious moments to escape flash fires.

Hydrogen sulfide (H2S), a naturally occurring chemical in oil and natural gas, is present at drilling operations, compressor stations and refineries. As a byproduct of the combustion of hydrocarbons during drilling, flaring and production of natural gas, H2S is released into the atmosphere.8 H2S exposure contributed to 60 deaths according to BLS statistics from 2001- 2010.

Because it is heavier than air, H2S settles and accumulates in concentrations, exposing workers to this corrosive chemical vapors and risking serious, even fatal, health and safety hazards. The tell-tale rotten egg smell might alert workers to exposure, but continuous exposure can lead to olfactory desensitization. Many workers wear a H2S monitor to alert them of dangerous limits.

"H2S is dangerous and must be handled and treated properly throughout all stages of drilling and production," said Sheldon McKee, Director of Business & Product Development at AMGAS, in a February 2014 AMGAS news release that was also quoted in The Wall Street Journal. "We want to push the industry forward and continue to work to raise the standards of H2S treatment and removal."

Featured in the January 2014 issue of New Technology Magazine, Calgary-based AMGAS, a leader in H2S treatment since 1989, launched its latest in chemical scrubbing equipment — the Absorbital 320 MAX — which scrubs, or converts, high concentrations of H2S to non-reversible water soluble byproducts, preventing the release of toxic gases into the air.10

Taking the lead in safety

The US is taking the lead in natural gas production. Rapid industry job growth and the subsequent increase in worker fatalities in drilling, extraction and support operations prioritize safety. It is essential to provide protective equipment and to empower workers with education, training and innovation that underwrite a culture of safety.

With such rapid expansion, health, safety and environment (HSE) training and regulation has not caught up with industry growth. While larger companies have the resources to hire staff dedicated to developing training and implementing programs for worker health and safety, smaller companies do not and may not be fully aware of the availability of distance learning programs that provide HSE training.

"Employers need to ensure that jobs are planned out, everyone has adequate training in all aspects of safety and workers need to be part of the planning," said Dr. David Michaels, Assistant Secretary of Labor for OSHA, in a 2013 OSHA news release. "We are telling employers that by identifying and eliminating hazards and training oil and gas workers to abate these hazards, you can save lives." 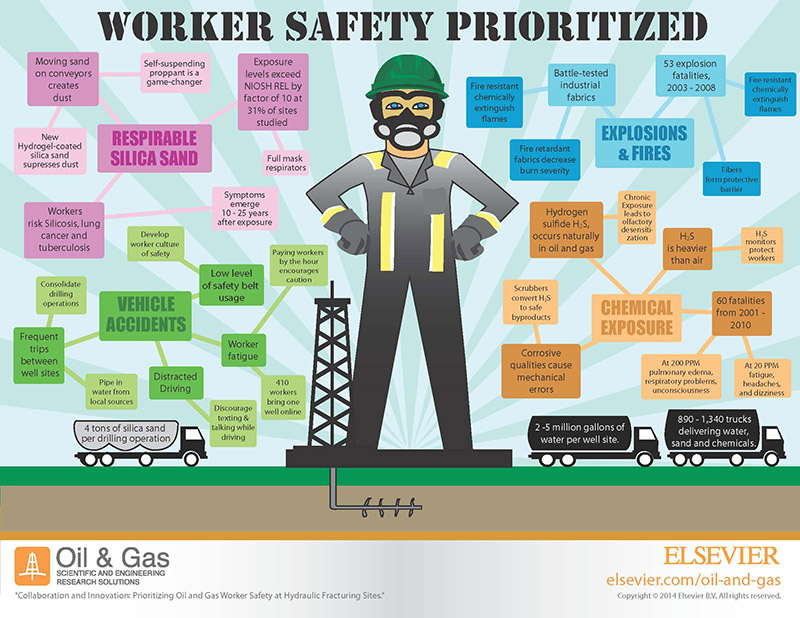 7. Banjo, S. (2013, May 13). "What the Well-Dressed Fracker Is Wearing: Retailers, Manufacturers Envision a Gold Rush in Duds for Workers in Booming Oil and Gas Fields," The Wall Street Journal. Retrieved February 18, 2014. 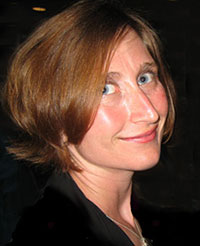 Tara Zrinski (@TaraMZrinski) is a research and investigative freelance journalist. Her work is regularly featured in the Shalereporter.com, where she has reported on O&G development in the Marcellus Shale since 2012. She has also published investigative pieces in The Elucidator magazine on topics including AIDS, Autism Spectrum Disorder, cancer, attachment parenting and wrongful conviction. She recently published four entries in the Sage Encyclopedia of Cancer Research and Society.

Zrinski is an Adjunct Professor of Philosophy at Northampton County Community College and lives in Bethlehem, Pennsylvania.