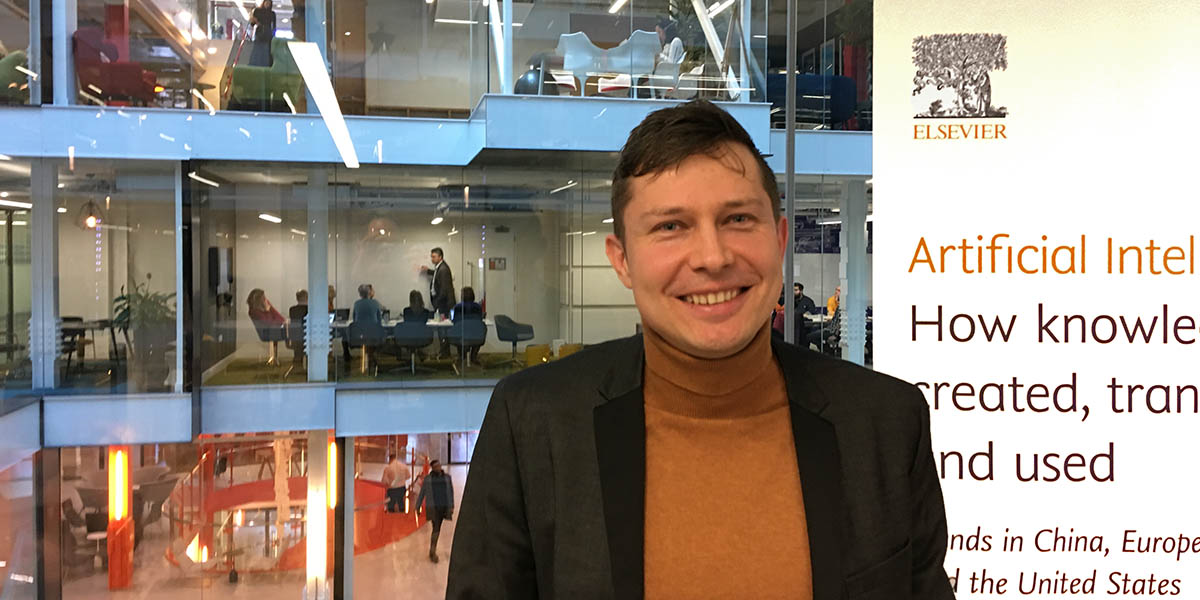 Dr. Lukasz Porwol knows that communication is important. The exchange of ideas for education and understanding is, he says, at the core of civilization and the technologies around it are some of the most vital in the world.

“Right from the conception of contemporary computers, beginning with the construction of the Bombe machine by Alan Turing to break the Enigma code, computing has revolved around communications,” said Lukasz, a postdoctoral researcher and E-Government Deputy Unit Leader at the Insight Centre for Data Analytics at the National University of Ireland, Galway (NUIG).

“As you see today, communications and social media companies are some of the most valuable businesses in the world. I’m looking at what’s next in this area, and the big emerging communications technology is virtual reality.”

As important as communications technology is, there are a lot of shortcomings in the conferencing tools that have become commonplace in modern life, Lukasz explained:

The likes of Skype provide a sense of presence and connection, but I think everyone can relate to the experience of saying, ‘Hello, can you hear me?’ ‘Can this person go on mute?’ – and if you have more than 10 people it’s a mess. People get distracted, they look at their emails; it’s nowhere near as engaging as face to face.

Instead, Lukasz started to look at the potential for virtual reality for collaboration, communication and education. He was inspired and intrigued by some of the reported levels of immersion. “There was one talk I saw by a researcher at Harvard Medical School who talked about the how they use virtual reality as pain relief for children, with some studies suggesting it can be as effective as opioids,” he said. “VR can be so immersive that people are entirely cognizant of the virtual world they’re in.” 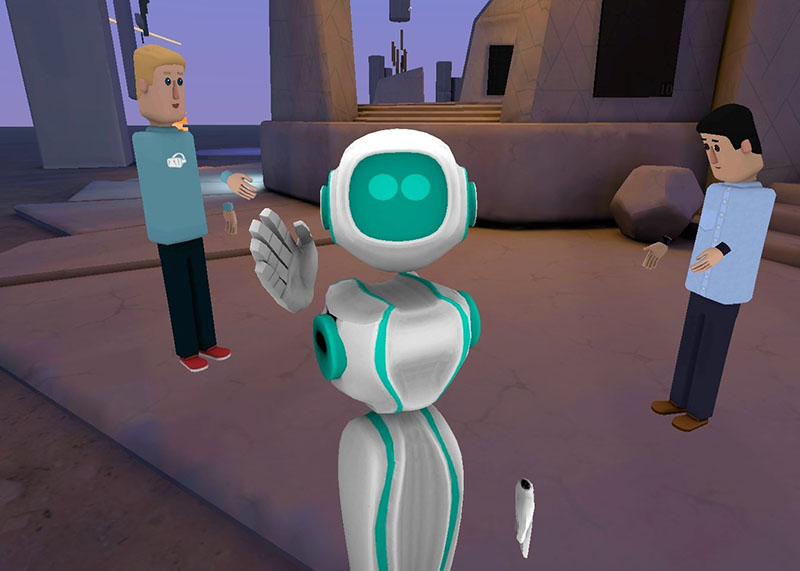 That has implications for communication and learning, said Lukasz, and suggests that in some ways, virtual reality can improve on reality. “When you look at communication theory, it’s always about the channel. When we’re talking, you might hear about 60 percent of what I’m saying. There’s background noise, you might not understand my accent. At the same time, if we were in a group, there could be a bias based on ethnicity or an attraction to someone in the room – you might not act, but it affects the interaction. With VR, you can remove those things, so there’s nothing about that way they look, and you can focus on the conversation alone, while retaining the focus and immersion of a personal interaction.” 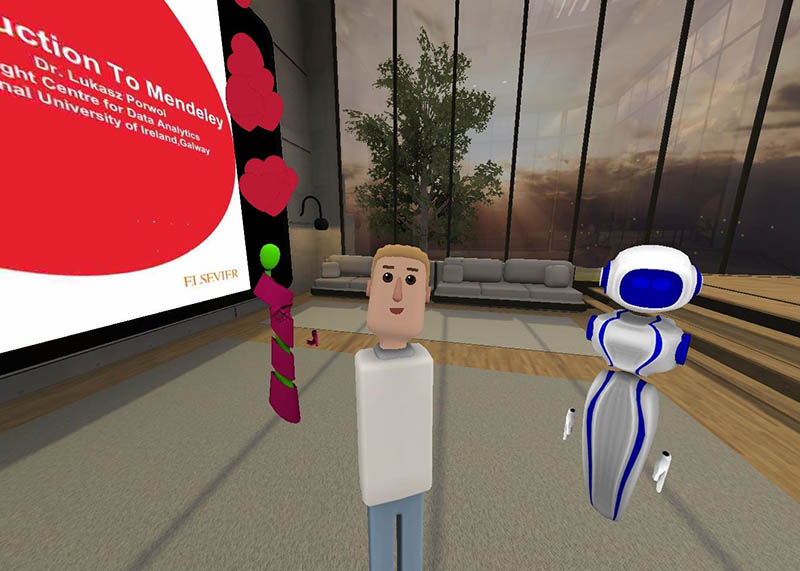 While Lukasz conducted his own research into virtual reality, he also put it to use for teaching purposes. For the past eight years, he has been a Mendeley Advisor, helping other students and researchers unlock the potential of the academic researcher network.

“Mendeley is marvelous,” he said. “It provides a great framework for collaboration, where people can share papers, read each other’s notes on papers, and collaborate on documents. It’s also shaping itself into something even more interesting – it’s becoming a comprehensive one-stop shop for researchers to find funding, find research, and collaborate. I found it a terrific time-saver, so I want to teach others how to get the best out of it.”

To do that, Lukasz set up some training sessions for using Mendeley in virtual reality meeting rooms, replicating the face-to-face sessions he had run previously. While people were immediately struck by the additional level of engagement it offered, they quickly started to see the potential of VR to offer a teaching environment that improved on reality.

“People start off saying, ‘Wow, this is so cool – but couldn’t we be in a nicer setting than a meeting room?’. In the Mendeley teaching sessions, we started to talk about how we could operate in a 3D space, use it to examine 3D models together, for example. Mendeley already offers collaboration tools – maybe that can be expanded into the VR space, so you meet in real time in VR space in public groups, attend seminars, and take collaborative actions that benefit from the deeper connection VR provides.”

Mendeley Advisors are a group of 5,000+ Mendeley lovers in 130 countries, who help us to get the word out about the benefits of good reference and research workflow management. Learn more about the Mendeley Advisors here, including how to become one.

In Lukasz’s experience, once people get thinking about the potential of VR for research, science and medicine, the possibilities are near endless. “Imagine urban planning, being able to visualize and walk through a city, or being able to put people directly into the effects of climate change. In mechanical engineering, you can work through how to assemble a tool or component. It opens up a whole new level of collaboration.”

As well as providing immersion, interactions in a virtual space also generate data – and that can present opportunities as well as challenges, Lukasz said. “At the moment, I’m looking at how you can monitor research collaboration in VR. For example, if people are holding a conference in a VR room, you can track who they spend more time with, which configuration of people makes them most engaged. Because everything in VR is data, you can observe what’s going on at every level – the sound, the voice, vr-spatial,  facial temperature – and identify which team configurations will work best. Or you could simulate social collaborations and conflicts and identify strategies to resolve them.”

That level of insight, however, raises questions around the ethical use of VR. Lukasz warned that because so much research is taking place in the private sector rather than being publicly funded, there are risks that familiar problems around data may rear their head.

“If you look at what happened with social media, you see a technology that was largely developed behind closed doors. If it was publicly funded, you could identify a lot of those challenges before they became an issue.”

Lukasz pointed out that the way each person moves is unique; from the way they walk to the way they move their head. Based on data acquired through VR, an algorithm can then identify a person with 99.9 percent accuracy from movement alone. “You can be identified without really knowing it. That’s just one example of the challenges; others have been are completely unexplored.”

Staking a claim on VR

From Lukasz’s point of view, VR is ready to burst out of its niche as an entertainment format, and when it does, opportunities abound. To make the most of those, he says, academic research needs to mark out its territory.

“VR is going to get big one way or the other – so we have a choice. Do we shape it in the world of academia, or do we let it be shaped entirely by industry?” 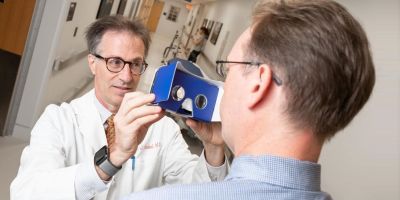 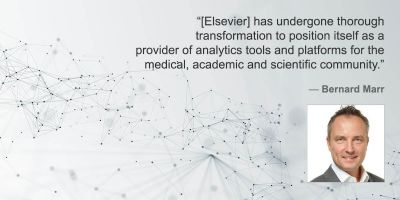 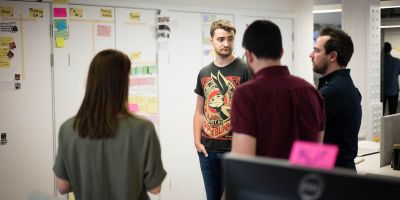 How Mendeley supports your research career (including finding one)