By Kendall Morgan, PhD - April 1, 2020  10 mins
Global map of rice research, 1983–2012. Full-size version and description available in the article below. (Source: Tommaso Ciarli and Ismael Ràfols, “The relation between research priorities and societal demands: the case of rice,” Research Policy, May 2019)

Each month, the Elsevier Atlas Award recognizes research that could significantly impact people's lives around the world. The December 2020 award goes to goes to Tommaso Ciarli and Ismael Rafols for their May 2019 article in Research Policy:

Scientific research supports our ability to achieve major goals in society, supporting innovations in healthcare and in nutrition and food production, for instance. But according to an Atlas-winning study, research priorities and societal demands may not always add up.

The findings reported recently in Research Policy come from Dr. Tommaso Ciarli, Senior Research Fellow for the University of Sussex Science Policy Research Unit (SPRU), and Dr. Ismael Rafols, a senior researcher at CWTS, Leiden University, and associate faculty at SPRU. The researchers were curious to know how agricultural research priorities and agriculture-related societal demands or needs for research are related across countries. To begin to explore this question, they focused on an important agricultural staple: rice 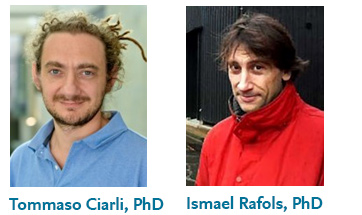 “Rice is an interesting case study because of its socioeconomic importance,” the researchers wrote. “It is a basic good that has been produced for centuries, which incorporates high technology components with centuries of knowledge and experience and which satisfies multiple needs.”

Rice is clearly an important agricultural crop, feeding 3 billion people around the world. It was also at the core of a worldwide investment in agriculture research and technology.

To look at this relationship, Drs. Ciarli and Rafols first gathered data on the research “supply” based on scientific publications reported from 1983 to 2012 for a panel of 16 countries. On the demand side, they gathered data on rice use (exports, rice consumption, seeds, food processing, imports, waste and animal feed), along with the needs of rice farmers and consumers, including fertilizers, pesticide, and the share of caloric intake from rice.

The evidence showed that sometimes demands and priorities are relatively well aligned. For instance, they report, countries with low yields invested more in plant nutrition. But, in many other cases, the data shows poor alignment.

The findings are especially important to consider as countries around the world look to meet the United Nations 2030 Agenda for Sustainable Development that includes 17 Sustainable Development Goals (SDGs) over the next decade. There will never be perfect alignment between research priorities and societal demands for a variety of reasons, the researchers say. But, they note, if countries are serious about achieving the SDGs, it would be worth attempting to align research priorities with them more closely.

“I think this work along with other research is providing solid empirical evidence that, if we put the question, ‘Are we doing the right type of research to address societal needs?’ the answer seems to be no in a number of cases,” Dr. Ciarli added. “We are not in a position to give advice on the best line of research to be done, but what this evidence suggests is that funders and organizations should be putting this question up front when funding research. Are we doing the right type of research according to societal needs? And this is something that should be openly discussed. That’s what we’d like to see happening.”

Drs. Ciarli and Rafols are now focusing on this question about the relation between research priorities and societal demands more broadly in the context of the UN’s 17 Sustainable Development Goals. “We want to understand whether we find similar types of misalignment on a broader scale,” Dr. Ciarli said.

A Conversation with Tommaso Ciarli and Ismael Rafols

I recently spoke with Tommaso Ciarli and Ismael Rafols about the relation between research priorities and societal demands and what they learned by exploring this in the context of rice..

It seems obviously important to consider the relationship between research priorities and the needs of society. But is this something that doesn’t happen enough or not in a clear way?

Rafols: There are a variety of studies that suggest that indeed there is a lot of research on some issues and some other issues are under researched relatively. It is well documented in the case of health. In health, for example, there’s a lot of research on cancer, which has an important disease burden. But there’s less on cardiovascular diseases or infectious diseases, which also have high diseases burden. And why is that? There are a variety of economic and political reasons why this happens, as we discuss in the paper.

To make it short, yes, there’s evidence in many cases that research is not necessarily addressing the most important societal needs.

How did you choose to explore this in the context of agriculture?

Ciarli: First of all, because there is a little bit of research on health—so that’s a little bit documented already. But also because one of the reasons there’s not strong alignment between research priorities and societal demands is related to the fact that the focus tends to be on issues or problems which affect the parts of the population that have the most influence on research funding and priorities, and these tend to be the most wealthy parts of the population. So, when you look at health, there’s not only a difference between cancer and cardiovascular disease, but also there’s the whole issue about neglected diseases, as I’m sure you’ve heard about. There’s lots of research on cancer and much less on malaria, for example.

Rice is important because it was at the center of the Green Revolution. This was a huge program after World War II to reduce poverty in Southeast Asia. It is a staple for a large part of the population. But it’s also interesting to realize differences in needs across populations and needs across countries and what are the priorities in research.

How did you go about exploring the relationship between research priorities and demands?

Ciarli: This was difficult in the sense that one needs to make an assumption about what is understood in research as the supply and what is understood as demands. We focused first on the supply side to understand what the priorities are. To do this, we used publications, since this is a measurable output of research. Using publications for 30 years from the 1980s until 2012, we look at the main topics—we construct them using the publications’ key words—and try to uncover the structure to identify which are the most relevant topics and how they are clustered together. We identify seven main topics, including rice varieties and traditional genetics, molecular biology, human consumption, plant nutrition and productivity, social sciences and pest and weed control.

To characterize the demand side, we found two types of data related to how rice is used in different countries, whether for consumption, export, or seed. This would indicate different demands at the national level. And we also looked for indicators such as calorie intake supplied by rice, malnutrition, use of pesticide, and fertilizer. These are topics related to protecting plants versus providing more nutrients. Then, we looked at how those research areas relate to the use of rice in different countries.

How can looking at this relationship and understanding it better help to improve alignment?

Ciarli: What this shows is that there is a problem in research priority setting, and that this problem needs to be addressed. It is important that this is understood not as there should be an exact alignment between the share of research or publications in a topic and what would be the demand at the country level for a number of reasons. For instance, output publications do reflect the distribution of funded research. But it may be the case that for research on one topic you need less investment and fewer publications than in another topic. Even though we may not want exact alignment between societal demands and research needs, if you have a country in which the there’s a large population, which is undernourished and which uses rice as a common staple which supplies large amount of calories, it does suggest more information and understanding of how to improve the caloric intake of rice produced in a country would be useful. We are tying to uncover this problem to suggest there might be room for improvement and discussion with universities, research funders, and the researcher themselves about the allocation of funding in terms of what might be the needs of the population in which the research is done.

There’s another caveat here and that is that research and knowledge can be imported from abroad. Publications are out there and one potential objection is to say that, fine you can acquire information from research in the U.S., for example, which is partially true. But you need to build capabilities in order to do and apply research in the context. Even though you or I can acquire research from the U.S. or another country, it might be it wouldn’t be useful to improve caloric intake of rice in Thailand. You may need to improve the capability in research and its application locally to make those improvements.

Rafols: This is an example, possibly one of the first in agriculture, of the fact that research is not necessarily addressing the most important societal needs. Therefore, there’s a case for funders and research organizations to rethink their agendas so as to better address societal issues. This is important, as many governments are now thinking about aligning research agendas along with Sustainable Development Goals.

Rafols: I think it’s important to mention that this is part of a long debate on how science serves societal pursuits. It is often assumed that science is always good, whatever is done and whatever is the focus. However, this study suggests it might be useful to think more strategically about the priorities in science.

Ciarli: I’d like to emphasize that these are complex issues and it’s difficult to make assumptions about how societal needs are translated all the way to research outputs. So, this is an area in which we think we need a lot of research. I think we need to emphasize that this is a broader issue, which starts from understanding what are the main societal needs. It’s not that all responsibility is on research funders. It’s policy makers and other stakeholders, too, including us researchers. The agenda is set at the research level, and depends on how much policy is interested in addressing inequality because that’s at the core of the problem of aligning societal needs with research prioritization.

Research Policyarticles examine empirically and theoretically the interaction between innovation, technology or research, on the one hand, and economic, social, political and organizational processes, on the other. All RP papers are expected to yield findings that have implications for policy or management.