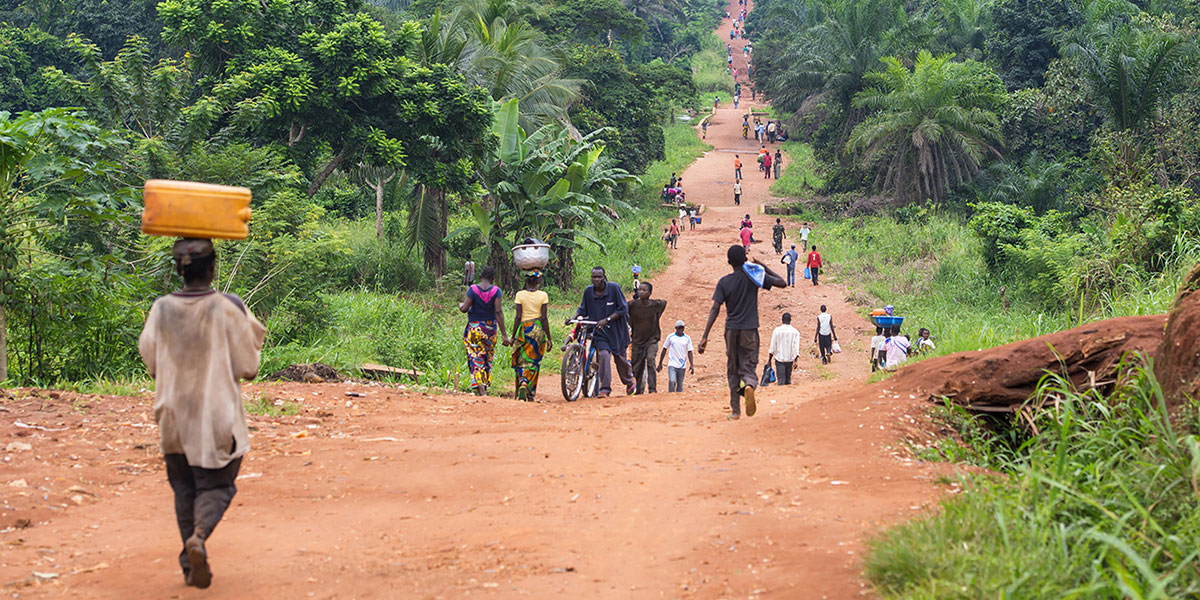 Each month the Elsevier Atlas Award recognizes research that could significantly ­impact people's lives around the world.

From the year 2000 to 2012, more than 2 million square kilometers of forest was lost around the world. That deforestation has been especially concentrated in the tropics, where it’s expected to continue. Now, an Atlas award-winning team of researchers has shown that this loss of forests and the biodiversity that goes with them has come with negative consequences for the diets of children living in sub-Saharan Africa, where the rate of deforestation is twice the world average.

“The question we were asking most simply was: Is there a connection between deforestation and healthy child diets?” said Lindsay Galway from Lakehead University in Ontario, Canada. “And, we found there is.”

Galway and study co-authors Yubraj Acharya and Andrew D. Jones suspected that deforestation might jeopardize human health in a variety of ways. In fact, there’d already been some evidence linking deforestation to a variety of health conditions including respiratory infections, malaria, and diarrheal disease.

But, recognizing that food from the forest plays an especially important role in rural communities with little access to food markets, they asked, what effect was deforestation having on childhood nutrition? Galway and her colleagues realized that the emergence of high-resolution satellite-derived data on changes to forest cover along with readily available georeferenced health data presented an opportunity to begin to answer that question.

The researchers examined Demographic and Health Surveys, a program that collects nationally representative data on fertility, health, and nutrition topics around the world. They focused their attention on data representing more than 33,000 children, aged 6 months to 2 years, across 15 countries in sub-Saharan Africa. They also used publicly available, remotely sensed data on deforestation covering the same geographic areas.

Their studies showed that only one in five children met the requirement for the World Health Organization’s Minimum Diet Diversity, an indicator of diet quality. A third or less of children had eaten meat, dairy, or eggs in the day preceding their survey interview. About 40 percent had consumed vitamin A-rich fruits or vegetables. Few had had other fruits and vegetables.

The researchers say that the new findings highlight the need for additional research to explore the mechanisms linking deforestation and diets across different settings. They also call for more research to identify points of intervention at the intersection of agriculture, nutrition, and forest conservation.

The findings also come as an example of the many intriguing questions that can be asked and answered with rapidly growing, publicly available geo-referenced data resources.

“As time moves on and the satellite data gets better, it’s a new frontier in health research,” Galway said. “There aren’t too many researchers tapping into these data yet.” But, she says, as more interdisciplinary researchers become skilled in working with this emerging source of data, “we’ll be able to ask all sorts of interesting new questions.”

A Conversation with Lindsay Galway

Atlas spoke with Lindsay Galway from Lakehead University in Ontario, Canada, about deforestation and its impact on the diet and nutrition available to children in sub-Saharan Africa.

Atlas: There’s lots of attention to the effects of deforestation, but people in many parts of the world might not be used to thinking about forests as having an impact on diet? What’s the connection?

Lindsay Galway: I think that’s true. But, we’re seeing a more and more diverse body of literature supporting the idea that forests and particularly healthy, diverse forests support health in multiple, myriad ways. That support is really enacted through what we think about and talk about as “ecosystem services” that support human health and wellbeing in many ways—and nutrition and healthy diet is one of those. We were interested in learning more about it.

Atlas: What led you to look at this now and in these 15 countries in sub-Saharan Africa?

Lindsay Galway: There are lots of reasons. Emerging research interests generally have multiple sources of inspiration. But, to be honest, we saw there was a gap. We’d seen evidence suggesting links between healthy forest and healthy child diet, but we didn’t know if the opposite was also true. Was loss of forest impacting negatively child diet diversity? So, we saw that gap there. Another important source for us was an interest to utilize geo-referenced health data, which is linked to specific locations across space within African nations, together with emerging, remotely sensed deforestation data. So, we saw these two innovative sources of data were available and we thought we could link these and explore the association between the two.

Lindsay Galway: We had a rather large sample including 15 countries and almost 40,000 children. We adjusted for confounding variables and we found that children in areas where there’s more deforestation are less likely to have healthy, diverse diets and lower odds of eating nutritionally important food sources including vitamin A rich sources such as legumes.

Atlas: Was there anything that surprised you or struck you in particular?

Lindsay Galway: We wanted to look at this association across regions in West, East, and Central Africa. Naturally, we asked if there were differences across regions and we found there are important differences. The strongest relationships were in West Africa and we’re not entirely sure why that is. We have some ideas. It could be there’s more deforestation in the West or there are different drivers of deforestation or perhaps households there rely more on bushmeat. But, we’re not too sure yet why that’s the case.

Atlas: At the end of your report, you mention that human nutrition and forest conservation are often positioned as being at odds. What do you mean by this?

Lindsay Galway: We didn’t expand on this a great deal and I’d love to do more thinking around this. Oftentimes, we’re taking knowledge and applying it in practice. At times, things we suggest as being best for conservation and what we might suggest as best for agriculture and/or human health do not point in the same direction. We are in an era of drastic, changing environment and inequitable distribution of health impacts. I think our big task at this stage is to identify actions that could offer multiple benefits for many challenges, in this case conservation of the environment and healthy outcomes for child diets. We’re aiming to identify actions or solutions that can offer co-benefits. Rather than addressing each challenge separately, we can approach it with multiple challenges in mind.

Atlas: You mention that this is hypothesis-generating research. What are some of the questions this has raised for you?

Lindsay Galway: Yes, there are always more questions. We have a handful of additional questions that me and my coauthors want to explore more. One is looking at regional differences and what are the factors explaining those. There’s a question about how important context and social or ecological settings are in explaining the relationship we found. The big unknown is mechanism. There is a long, complex pathway from deforestation to child nutrition outcomes. What are the mechanisms unfolding along that pathway? I think also perhaps it would be interesting to explore different kinds of outputs health endpoints. For instance, I have an interest in exploring water borne illness and the way loss of forest influences those risks.

The journal is an interdisciplinary journal dedicated to the study of all aspects of health and health care in which place or location matters.