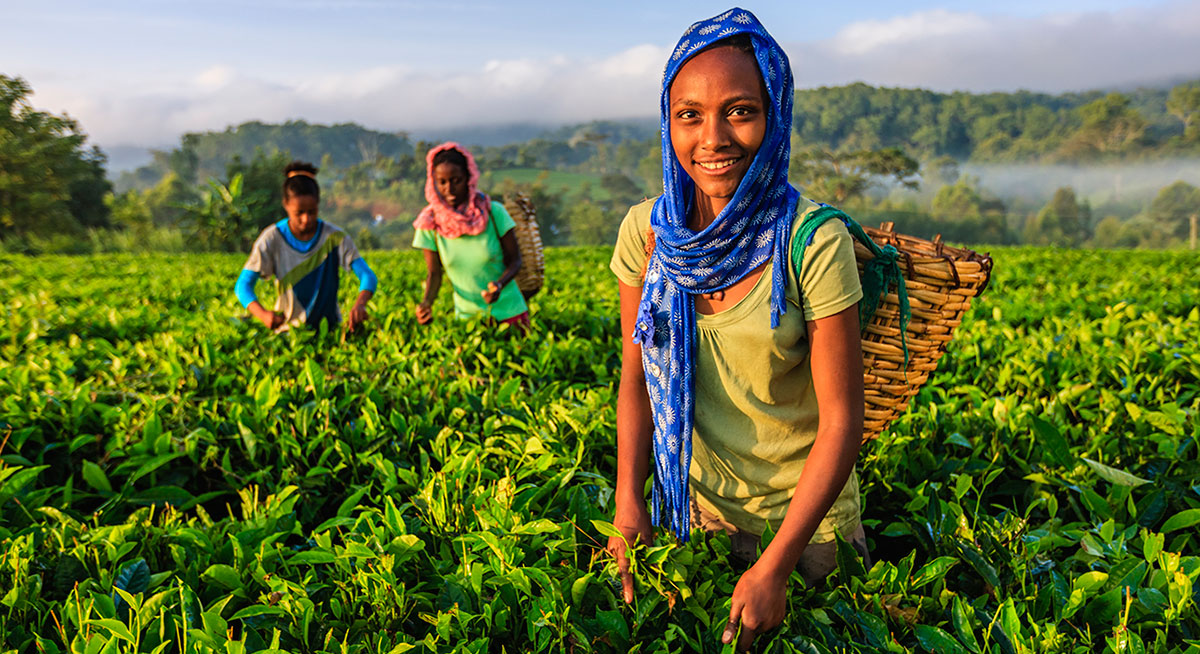 One of the key Sustainable Development Goals set by the United Nations is to “end hunger, achieve food security and improved nutrition and promote sustainable agriculture.” Now, an Atlas-award winning team of researchers says that, in working toward these goals, the development of local fertilizers will play a pivotal, if underappreciated, role in increasing crop production in Africa as well as in many other places around the globe.

“In many places, mineral fertilizers must be imported from other parts of the world and are expensive due to the long-distance travel,” said Davide Ciceri of the Massachusetts Institute of Technology, Cambridge. “So, we have been asking: is there any potential alternative to traditional fertilizers? Are there local resources?”

Ciceri’s latest work with coauthor Antoine Allanore, also at MIT, focuses on fertilizer use in Africa, laying a foundation for future research aimed to identify promising local resources for essential plant nutrients. They were inspired by their previous work conducted in Brazil, where there is a strong agricultural industry despite a lack of local sources for much-needed potassium fertilizers. While the fertilizer industry depends on potash in the Northern Hemisphere as a source for potassium, Ciceri’s team has recognized there may be untapped potential in a mineral known as feldspar, which is found in many places around the world.

In the new report, they took their experience in Brazil and attempted to translate it to Africa. The pair first reviewed the current use of fertilizer in African nations. Their review shows that, with only a couple of exceptions, the use of fertilizer per area of cropland is low in most African nations compared to the rest of the world. Their findings also show that some African countries are actually exporting fertilizer. But, they write, those exports are a sign of weak demand not a surplus in fertilizer supply.

Ciceri and Allanore say that a fertilizer supply chain based on local materials is desired to support the agricultural production needed to support a growing human population. For that to be achieved, it will require research into raw materials that are locally available along with soil properties and the needs of local crops. Progress will require looking beyond conventional sources of the major nutrients needed by plants.

The researchers see potential in the use of primary rocks and minerals, which have the advantage that they may be applied to the soil directly as powder. While there are no known mineral sources with promise for obtaining sufficient levels of nitrogen, they note that there are promising sources for potassium and phosphorus fertilizers.

“Africa is facing an unprecedented population growth that generates a genuine concern about its ability to ever become food self-sufficient,” Ciceri and Allanore wrote. If the growing demand for food is to be met, farmers in Africa will need to increase their use of fertilizers. But, they say, that will require careful review of current fertilizer policy and trade along with potential advances in the development of fertilizers tailored to African soils.

The hope is that progress in the use of fertilizers will help in meeting the near-term goals as set by the United Nations. In the longer term, a successful implementation of their strategy, including interconnected research in geology, material science, and agronomy, “is hoped to result in a food self-sufficient Africa.”

A Conversation with Davide Ciceri

Atlas spoke with Davide Ciceri about local fertilizers and their role in achieving food self-sufficiency in Africa.

Atlas: Why is fertilizer use an important issue to consider now?

Davide Ciceri: This is a project that has come a long way. It developed over 5 years, originally inspired by an issue in Brazil, which is a major agricultural powerhouse. Unfortunately, in Brazil there are no local sources for potassium fertilizer. So, fertilizers must be imported from other parts of the world and are expensive due to the long distance travel. So, we have been asking: is there any potential alternative to traditional fertilizers? Are there local resources? We stumbled upon a mineral, feldspar, which is abundant throughout the world. So, we did some material science to explore how we can transform these rocks into a fertilizer.

We then realized that this cost issue of fertilizer is an issue in many other parts of the world, especially in the tropics. From there, we have explored the issues around fertilizers including the types of materials that are out there and issues found in the supply chain and we’re trying to determine some possible areas where research and knowledge is currently missing. We have put all these ideas and issues together and out of that we published the paper we are discussing today focused on circumstances in Africa.

Atlas: How important is it to make sure there are fertilizers available in Africa?

Davide Ciceri: It is critical. Agriculture in general is undergoing a revolution from many viewpoints. There is lots of interest about sensors that allow you to monitor in real-time at a very small level what concentration of key elements are in the soil. There is research on seeds and how we can improve crops from the standpoint of the seed. There is also a practical aspect related to machinery. How can we efficiently plow soil and improve the efficiency of water usage. Fertilizers are an area that hasn’t received as much attention and at same time are critical. All crops need nitrogen, phosphorus, and potassium and, at the moment, because of how the [fertilizer] industry was developed these resources often aren’t available locally. So, you face the issue of high cost of transport from where a fertilizer is produced and where it’s needed. If we look at Africa as a continent, fertilizer is potentially in high demand. Population growth is exponential. So, that’s the general background behind these issues of local availability of fertilizers.

Atlas: When you speak of fertilizers, does this include compost, manure, and such things to help build the soil? Or will inorganic fertilizers be required to achieve the goals as set?

Davide Ciceri: It’s part of the discussion we are working to stimulate with this paper. There is, especially in the West, a growing interest in organic agriculture and conservation agriculture. On this side of the world, we often focus on reducing use of fertilizer because we know there are environmental issues associated with overuse. On the other hand, there is a need to supply food for those who need it and it’s not clear how successful organic agriculture can be in some parts of the world because there’s low yield. There, you probably want to intensify crop production and to do that you need fertilizers among other things. However, we can learn from experiences elsewhere how to balance environmental issues associated with fertilizer overuse with the need to feed the local population.

There are other aspects related to the soil. In many places, the soil is poor in nutrients. If you don’t supply fertilizer, it’s unlikely any other optimization of water and seed can boost productivity to the necessary level. It’s important to note that soils vary greatly. In West Africa, say, you can go from the Sahara Desert down to the coast and there’s a great variation in soil. So the question is: are there commercial products suited to these different soils you encounter? For potassium, it’s clear the answer is “no.” The major product is potassium chloride. It’s a soluble salt and isn’t necessarily efficient in leached soil. We are attempting to stimulate discussion to create new fertilizers that are affordable, obtained from local resources, and that are well suited and tailored for specific soil. So the answer to the question: Do we need more fertilizer or do we need less fertilizer is not a straightforward answer and needs to be framed in a local context.

Atlas: Are there ideas you have already about where fertilizers might come from locally in Africa or is that the work of the future to look at the situation in various places and evaluate that from a materials science perspective?

Davide Ciceri: We think this is an area of research with enormous potential. I think we need to go back to three fundamentals, which are the geology of local resources, the local agronomics practices, and the material science. There are three main nutrients two of which come from minerals, so we think there’s room for exploration to understand where the minerals are and, if they are suitable, how local rocks and resources can be transformed into fertilizer for local crops. There are commercial products currently existing in other parts of the world and we need to figure out, if you have the needed resources in Africa, could we translate those existing processes to produce fertilizers there. We think there may be new types of resources that hadn’t been considered as a source of nutrients before. As I had mentioned, in the case of potassium, we think an answer may be in feldspar. It’s been used in ceramics, as paint filler, and in tiles, but there is potassium there and we have not been looking at this as a potential source of potassium.

There are, of course, other areas to consider. For example, nanotechnology studies show that if you supply nutrients—typically micronutrients like zinc and copper— in nanoparticle formulations plants will give a much higher response in terms of yield and growth than if you supply the same elements with traditional compounds. However, we don’t understand the mechanisms underlying these effects so there is also a lot of basic research needed.

It’s intrinsically complex. You have the crops and all the various aspects related to the biology and growth of the plant. There are various aspects related to the soil including the organic matter, the type of nutrients already present, the physics of the soil and how particles are compacted, how they drain water, and then there’s the chemistry of the fertilizer. We have little understanding about the interaction of all these factors from a fundamental standpoint. There’s still a lot to be discovered!

About Science of the Total Environment

Science of the Total Environmentis an international multi-disciplinary journal for publication of original research on the total environment, which includes the atmosphere, hydrosphere, biosphere, lithosphere, and anthroposphere.