Researchers are increasingly evaluated not only by the number of articles they have published but also by their impact. Discover some of the channels we have available to help you promote your published article

Traditionally, the impact of publications is measured by citations. However, not only does it take a while for citations to begin accumulating, they also provide a limited picture of an article's reach. For that reason, other metrics – such as readership figures, social media mentions, and captures  and shares on academic networks – are proving increasingly popular. And the result is that you as authors are required to play an ever more active role in making sure your work receives the attention it deserves.

That is where a new service called Kudos comes in.

In the words of its founders, Kudos was developed to help researchers, their institutions and funders "measure, monitor and maximize" the visibility and impact of their published articles. It does this by focusing on three core principles:

Kudos provides a platform for:

Philip Gale, Professor of Supramolecular Chemistry and Head of the School of Chemistry at the University of Southampton, has been involved in the project pilot and has found the service really useful. He said: "It not only helps me improve the visibility of my papers, by highlighting them to my social network, but also provides a way of widening the audience for the work by  linking a lay summary of the work to the paper."

After a successful alpha release phase in partnership with AIP Publishing, the Royal Society of Chemistry and Taylor & Francis, Kudos is ready to take the next step and has  signed up additional publishers, including Elsevier, for their beta phase. During this beta phase, which runs from April–December this year, we will test the tool with 22 journals.

Elsevier journals participating in the Kudos initiative are:

Following publication of their articles, authors from participating journals will receive an email asking them to log on to the Kudos platform. On the platform, they will be led through various steps that prompt them to explain their article; add context via links to other content such as images and  data; and share their article via social networks and email. 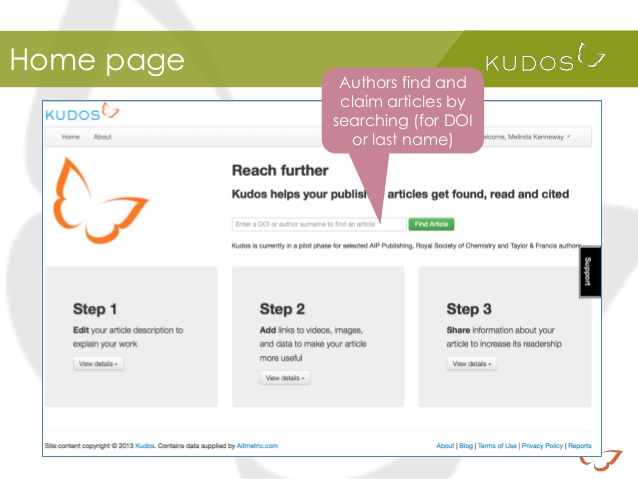 The Kudos platform, which is free for authors, allows authors to see the effect of their actions on altmetrics (via Altmetric.com) and data about the usage of their article on Elsevier's ScienceDirect.

The alpha pilot site for Kudos was launched in September last year and during the three-month pilot period more than 5,500 authors registered. They have claimed articles, enhanced them with additional metadata (such as a short title and lay summary) and links to related resources, and shared them via  email and social networks, which has led to increased usage of those articles.

During the beta phase, Kudos is working with a much wider group of publishers, articles and authors, which will enable them to undertake more rigorous analysis of the effectiveness of the service, and to explore variables such as subscription versus open access.

Last year, Elsevier's Article of the Future team launched a novel approach to helping authors ensure their research gets the attention it deserves - AudioSlides.

AudioSlides are 5-minute webcast-style presentations created by the authors of journal articles. Using a blend of slides (PDF and PowerPoint) and voice-over, you can explain your research in your own words. The resulting presentation appears alongside your published article on ScienceDirect and, like the abstract, can be viewed by subscribers and non-subscribers alike.

Because AudioSlides presentations are made available under a Creative Commons open-access license, you can also embed them on your personal or institutional websites.

The team has also recently made it possible for you to download your presentations in mp4/movie format so you can promote them through other channels, such as YouTube, or in presentations at workshops and conferences.

Since the initiative was launched, more than 1,760 AudioSlides presentations have been created.

Inez van Korlaar (@InezvKorlaar) joined Elsevier in 2006. After three years in publishing, she moved to the marketing communications department of STM Journals where  she is now Director of Project Management. In her current role she is responsible for global marketing communication projects, which includes outreach to researchers in their role as an author. She has a PhD in health psychology from Leiden University in  The Netherlands and is based in Amsterdam.