The Smart Tissue Autonomous Robot (STAR): the role of intelligence and autonomy in surgical robotics

Despite the well-recognized benefits of less traumatic approach and the enabling nature of robot assisted surgery (RAS), the spread of the technologies and adoption rates for both RAS and manual minimally invasive surgery (MIS) over the last two to three decades remain questionable for most surgeries other than technically simple procedures. The enabling advantage of RAS is based on superior vision, dexterity and ergonomics, while manual MIS offers more flexible and somewhat versatile access to different anatomic domains. However, the capital and maintenance costs, including consumables, large physical footprint, unshared workspace, lack of haptics and control console isolated from the patient in RAS continue to pose paramount challenges. In contrast, manual MIS, albeit more cost-effective than RAS, continues to be restricted in its applications in non-routine, more complicated surgery, due to tool design, especially pivoting around insertion sites, challenging ergonomics and dexterity. The critical underlying weakness of both technologies remains human factors: surgeon proficiency, practice volume, training and experience critically undermine surgical outcome and access to the techniques and technology. Apart from the benefits attributable to the approach, surgical outcomes related to the techniques and indications have not changed significantly since the open-surgery era. Future surgical techniques and technology therefore must focus not just on trying to see what can be done with the same instrument designs, powered or manual, but on how patient-centered outcomes can be improved and true value as can be created with technology.

The future technology must consider not just variations in tool design but a fundamental shift which enables the surgeon to conduct surgery differently and better, similar to the paradigm shift from open to minimally invasive surgery.

The following six areas may be considered:

Surgery comprises four phases: incision or access; resection; reconstruction; and closure. The rationale of the Smart Tissue Autonomous Robot (STAR) is that, if a critical part of surgery such as reconstruction (e.g. anastomosis) can benefit from intelligent and possibly autonomous tools, perhaps the remainder of surgery can also be conducted under full or under supervised autonomy in the not too distant future, to improve outcome. By programming optimal surgical techniques, it is possible to imagine a situation in which the best techniques and technology become available to everyone wherever and whenever surgery is needed in the future, thus democratizing surgery. We chose an intestinal anastomosis as proof-of-concept task, since no autonomous surgical task had ever been performed on soft tissue, given its deformability and mobility in the unstructured in-vivo environment.

To accomplish soft tissue autonomous robotic surgery, we improved vision by using 3D plenoptic camera with real-time tissue tracking using near-infrared technology to provide situational awareness (Figure 12.1). We deliberately restricted suturing to a single-hand technique by incorporating a commercially available manual suturing device, manufactured by Endoevolution, and added a force sensor for suture tension. An intelligent suturing algorithm was developed, based on optimal surgical suturing techniques as described in the literature and a consensus of experienced expert surgeons. We then compared the functional outcomes of anastomoses performed by the STAR in ex-vivo porcine intestine and in preclinical porcine models to those done by expert surgeons using open, laparoscopic and robotic-assisted surgery with da Vinci® system (Science Translational Medicine, May 2016). The results clearly and convincingly demonstrated that the anastomoses performed under full autonomy (60%) and supervised autonomy (40%) were superior in terms of leak pressure, suture consistency (variance) and mistakes and comparable in terms of time and the degree of luminal narrowing due to imbrication of the edge.

Figure 12.1 Integration of the system in the operating field. 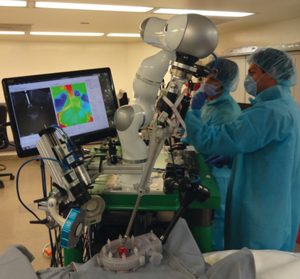 The goal of this study was not to see if an autonomous surgical robot could outperform human surgeons on a surgical task, but to see whether a complex surgical task could be programmed and executed on soft tissue. The surprising finding was that, with some improvements in vision beyond the human visual spectrum and vestigial improvements in narrow specific “intelligence”, the outcome of a commonly performed surgical task could be improved so as to be comparable to or better than current standards of practice. This work promises that, with additional improvements in vision and intelligence, many different aspects of surgery can be enhanced to provide more safety, more consistent outcomes, reduced complications and better access to optimal surgical techniques, thus “democratizing” surgery and creating value for all patients. This is the motivation in our effort to develop and improve the technology, heading toward patient-centered healthcare in the future.

Robot-assisted microsurgery: the next step in reconstructive surgery

In microsurgery, accuracy is crucial for the quality of the procedure, and is mainly limited by the surgeon’s physical skills. Mastering the techniques of microsurgery requires natural talent as well as practice and experience. In general, microsurgery is regarded as one of the most complex disciplines in the surgical domain.

The evolution of microsurgery has been based mainly on the increasing quality of surgical microscopes and the development of fine microsurgery instruments. While pushing the boundaries further by developing smaller flaps or more targeted treatment options, there is even more to be gained if physical skills could also be improved. Robotic technology is able to assist, by enabling higher precision and by reducing issues related to fatigue, accessibility, and ergonomic posture.

The development of robotic technology brings microsurgery into a new era, where medical procedures can be performed that go beyond what is currently possible for the human hand.

Today, the only clinically available surgical robot is the da Vinci® system. This system is designed and intended for minimally invasive surgery. The dexterity of the system can be beneficial in endoscopic intraoral procedures where accessibility is limited. It has been used experimentally in open microsurgical applications, with varying results. Several literature reports indicate that there might be benefits with robotic microsurgery, but the da Vinci® system’s lack of high-quality vision, fine instruments and accuracy make it unsuitable for (supra)microsurgery. Secondly, the da Vinci® system is not easily integrated in a conventional microsurgical approach. Its physical set-up and footprint require the operating room (OR) infrastructure to be drastically adjusted, and the way the OR staff communicate with each other and interact with the patient to be changed.

To address these issues, a new type of surgical robot specifically designed for microsurgery has been developed by a team of microsurgeons and engineers who have created a solution that is compatible with current operating techniques, instruments and other OR equipment. Moreover, the system is designed for high precision, safety and cost-effectiveness (Figure 12.2).

Figure 12.2 : Overall principle and aspect of the system.

The primary function of the device is to enhance the surgeon’s precision by stabilizing his or her movements during open microsurgical procedures. The system opens up the possibility of improving the outcome of existing procedures and enables new treatment options for currently unsolved conditions (e.g. lymphedema).

Apart from the robotic interface, surgical technique is identical to conventional microsurgery. The surgeon controls a joystick, which directly and in real time copies the surgeon’s movements to the micro-instruments held by the device. The device’s software scales down the movements and filters out tremor. It is equipped with genuine microsurgical instruments and is used in combination with existing surgical microscopes. In this way, OR methodology and infrastructure are unchanged. The surgeon and other staff remain at the patient’s side and the surgeon is always able instantaneously to continue the surgery manually.

In 2013 a first prototype of the device was produced, and was tested and optimized following feedback by microsurgeons from numerous centers worldwide.

Using the device, the surgeon is able to achieve equal performance between the dominant and non-dominant hand. This enables better control, versatility and dexterity during complex operations. The main advantage, however, is that the device ensures constant surgical performance over time, regardless of the surgeon’s fatigue, skill and physical condition.

A series of preclinical trials were set up by the clinical partner Maastricht UMC, involving microsurgeons of varying level of experience using the device. These trials included artificial tissue as well as in-vivo animal models: microanastomoses of 2.0 mm abdominal aorta and 0.5 mm femoral artery were performed in rat (Figure 12.3). The operations were filmed and analyzed by an independent panel of microsurgeons in a double-blinded assessment using a validated anastomosis quality score. Anastomosis time and adverse events were also recorded. 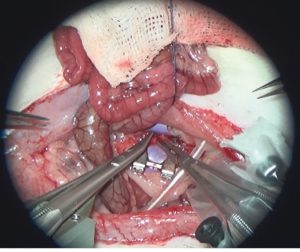 Results were promising and indicated that microanastomoses of 2.0 mm, 1.0 mm and 0.5 mm vessels can be performed successfully using this system, with a steep learning curve and anastomosis time decreasing with experience. Accurate positioning of needle entry and exit points, and well-controlled needle passage were enhanced by the system. The device was found to be easy to set up and use. An average learning curve of 10 hours was identified for a surgeon to become proficient in using the device in a clinical setting.

Currently, a second version of the device has been developed for clinical investigation in multiple surgical areas of interest: urology, ENT, plastic surgery and neurosurgery.

The aim is to enable the next step in reconstructive surgery, by removing the physical barrier of the human hand and thereby paving the way for the development of new and better treatment options in all microsurgical disciplines.