The Acta Biomaterialia Gold Medal recognizes demonstrated leadership in the field of Science and Engineering of Biomaterials. It rewards either

The awardee should be a recognized world leader in the field of biomaterials, whose accomplishments in discovery and translation to practice are surpassing and well known in the field. 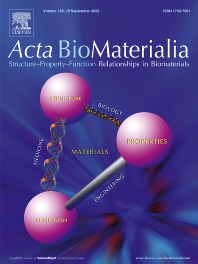 With this distinction Acta Materialia, Inc. not only intends to honor outstanding contributions to the field but also to improve the awareness of the fundamental importance and diversity of materials research, both within the community and the public at large.

Candidates for this award may be proposed by any scientist/engineer/practitioner or any biomaterials related society, previous Acta Biomaterialia award recipients, Sponsoring or Cooperating Societies of Acta Materialia, Inc., Members of the Board of Governors and of the Editorial Board of the Acta Materialia journals.

The nomination package should contain

**Please emphasize the nominee’s impact on their research field, rather than the metrics on their publications.

Nominations remain in effect for three years unless withdrawn or re-endorsed, with an additional justification, for an additional two-year period. Current members of the Acta Materialia Board of Governors and of the Award Selection Committee are not eligible.

The Award Selection Committee is formed of five judges, themselves distinguished biomaterials scientists.

The Acta Biomaterialia Gold Medal is awarded each year, unless the judges feel no candidate is qualified. The presentation is made at a venue approved by the Acta Materialia Executive Committee. The Award will not be bestowed in absentia except under extraordinary circumstances.

Nominations should be submitted to the Executive Secretary (Prof. Carolyn Hansson, chansson@uwaterloo.ca), as a single file document preferably in PDF or Word format.

Nomination deadline: December 31 of each year

The Acta Biomaterialia Gold Medal consists of a gold medal, an inscribed certificate, and a cash prize of US$10,000.