International comparative performance of India’s research base (2009-2013): a bibliometric analysis

Executive Summary of the report

The Indian Department of Science & Technology (DST) commissioned Elsevier to assess the performance of India’s research base compared with the world, the G8 and ten research-intensive countries (Australia, Canada, France, Germany, Italy, Japan, Spain, Sweden, the UK, and the US), BRICS and three other fast growing nations (Brazil, Korea, and Singapore), and the SAARC regional group of countries.

This report tracks performance of the national research system in an international setting, combining a variety of indicators to present a multifaceted view of India’s comparative performance in research as well as the trends that may affect its future position.

The International Comparative Performance of India’s Research Base – 2009-2013 report is the second consecutive report in this series to be delivered by Elsevier. The report shows that, "although India is still a relatively small player on the global stage, its wide-ranging international collaboration network and increasing shares of the world’s main research performance indicators reflect its overall growth in output, impact, and knowledge transfer" and advises that, "improving India’s international and cross-sector collaborations could be key to further growing the impact and visibility of India’s research." 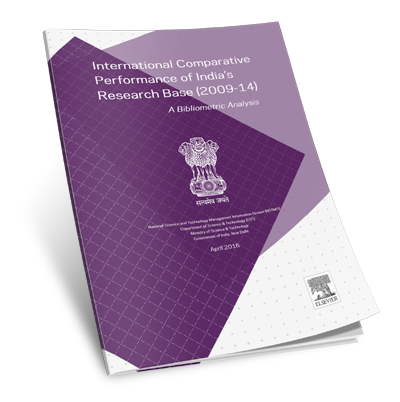 India's research performance has improved from 2009 to 2013.

In 2009, India produced more publications than Spain, Australia, Korea, Brazil, Sweden and Singapore. In 2013, India's output rose to also surpass that of Canada and Italy. Along multiple indicators of research, India has small but growing shares of the world's total, as shown in Figure A.

Although India is still a relatively small player on the global scientific stage, its wide ranging international collaboration network and increasing shares of the world's main research performance indicators reflect its overall growth in output, impact, and knowledge transfer. Improving India's international and cross-sector collaborations could be key to further growing the impact and visibility of India's research on the global scientific scene.