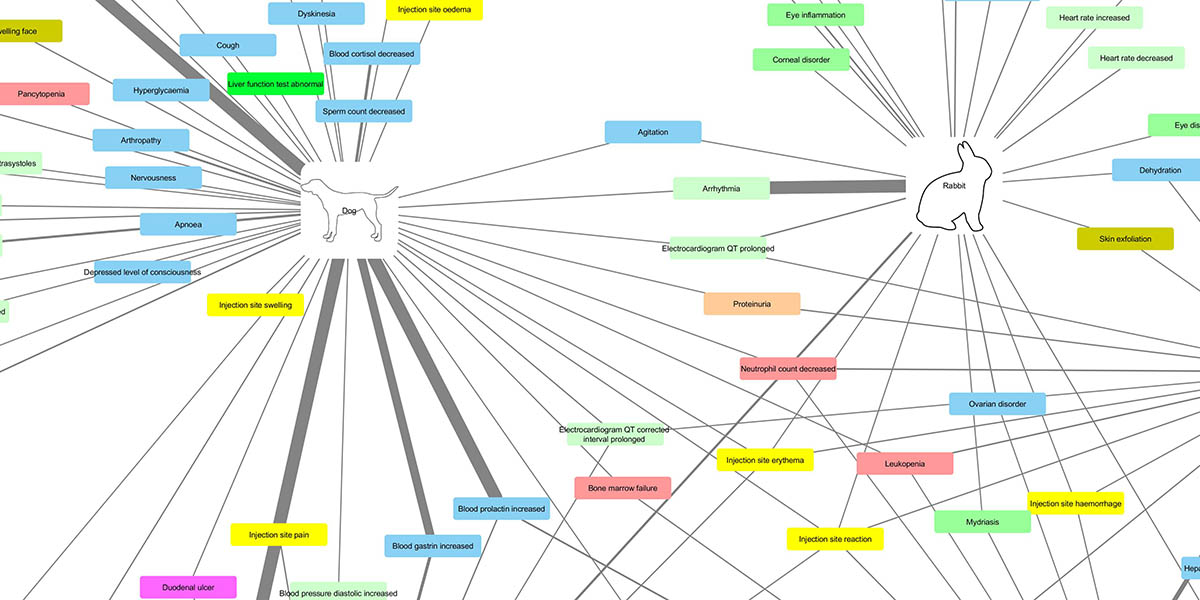 A new database may reduce the amount of animal testing needed in drug development.

The US Food and Drug Administration (FDA), the European Medicines Agency (EMA) and other drug regulatory bodies generally require animal testing before new entities can move into human studies. The life sciences industry understands the need for such testing, which may bring important patient safety concerns to the fore and improve patient selection for clinical trials. 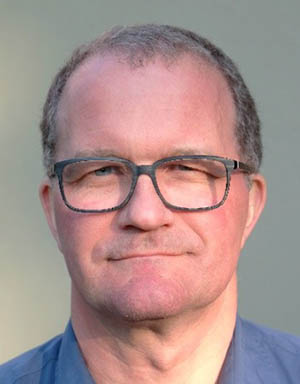 But the industry also is committed to reducing animal testing. While certain toxicities seen in animals are relevant to humans, many others are specific to the species, according to Dr. Matthew Clark, Director of Scientific Services at Elsevier. In the largest study of its kind, Dr. Clark and Dr. Thomas Steger-Hartmann, an investigational toxicologist at Bayer AG in Berlin, mined publicly available big data from regulatory submissions compiled in the PharmaPendium database to establish concordance, or consistency, between adverse events reported in animals and in humans. The result is a database that can help curb the amount of animal testing needed while still enabling companies to meet safety and regulatory requirements.

When Dr. Clark worked for a large pharmaceutical company, his pharmacologist colleagues, who were highly experienced, often seemed to know which animal toxicities mattered for humans and which didn’t, he recalled. That’s important because if an animal study reveals, say, cardiac or liver issues, researchers might decide to stop development of the drug. Or if the events are not frequent or severe enough to halt development, the information can be taken into consideration when they’re planning the clinical trial protocol by, for example, adding in a weekly blood test or cardiogram to monitor for problems. The information also could inform clinical trial recruitment — that is, researchers might decide to exclude individuals with liver or heart disease.

On the other hand, some adverse events seen in animals don’t have similar effects in humans, as far as we know, Dr. Clark noted:

The scientists I worked with would say, ‘Well, we’re seeing this (adverse event) in dogs, but we don’t worry about it.’ I’d ask why and they’d say, ‘Because we see it all the time and we never see it in patients, so it’s not a safety issue.’ Most of the time they were right, but there were no hard-and-fast statistics to go by. And we knew from experience that not picking up on a relevant toxicity could have disastrous consequences, as we saw with thalidomide, which caused thousands of birth defects and fe deaths worldwide. Testing for long QT syndrome, which was largely unappreciated until the 1990’s, is now a routine part of every preclinical study because it can result in sudden death.

Dr. Clark became interested in understanding the relationship between animal and human toxicities in the most quantitative way possible. “That way,” he said, “our experience could be augmented by evidence-based analysis.”

He and Dr. Steger-Hartmann embarked on a study of 3,815 drugs using the PharmaPendium database of drug approval documents and other materials to correlate safety findings from animals with certain specific adverse events in humans. For example, raised alanine aminotransferase (ALT) levels in animals might indicate that a drug could cause liver damage in humans, or it might be a transient rise that was not clinically meaningful, or due to something other than the drug being tested. Mining the the regulatory filings in PharmaPendium enabled them to tell the difference.

“Many studies report raised ALT levels, but PharmaPendium generates an adverse event record only if the authors of a particular study concluded that there was a notable increase, meaning the rise was likely treatment-related,” Dr. Clark said.

His concordance analyses revealed that some preclinical adverse events in animals are predictive — that is, if they happen in the animal model, then they’re highly likely to occur in humans. However, the study also showed that the fact that an adverse event doesn’t occur in animals does not guarantee that it won’t be found in people; therefore, lack of an adverse event in an animal model is not a good predictor of human safety. 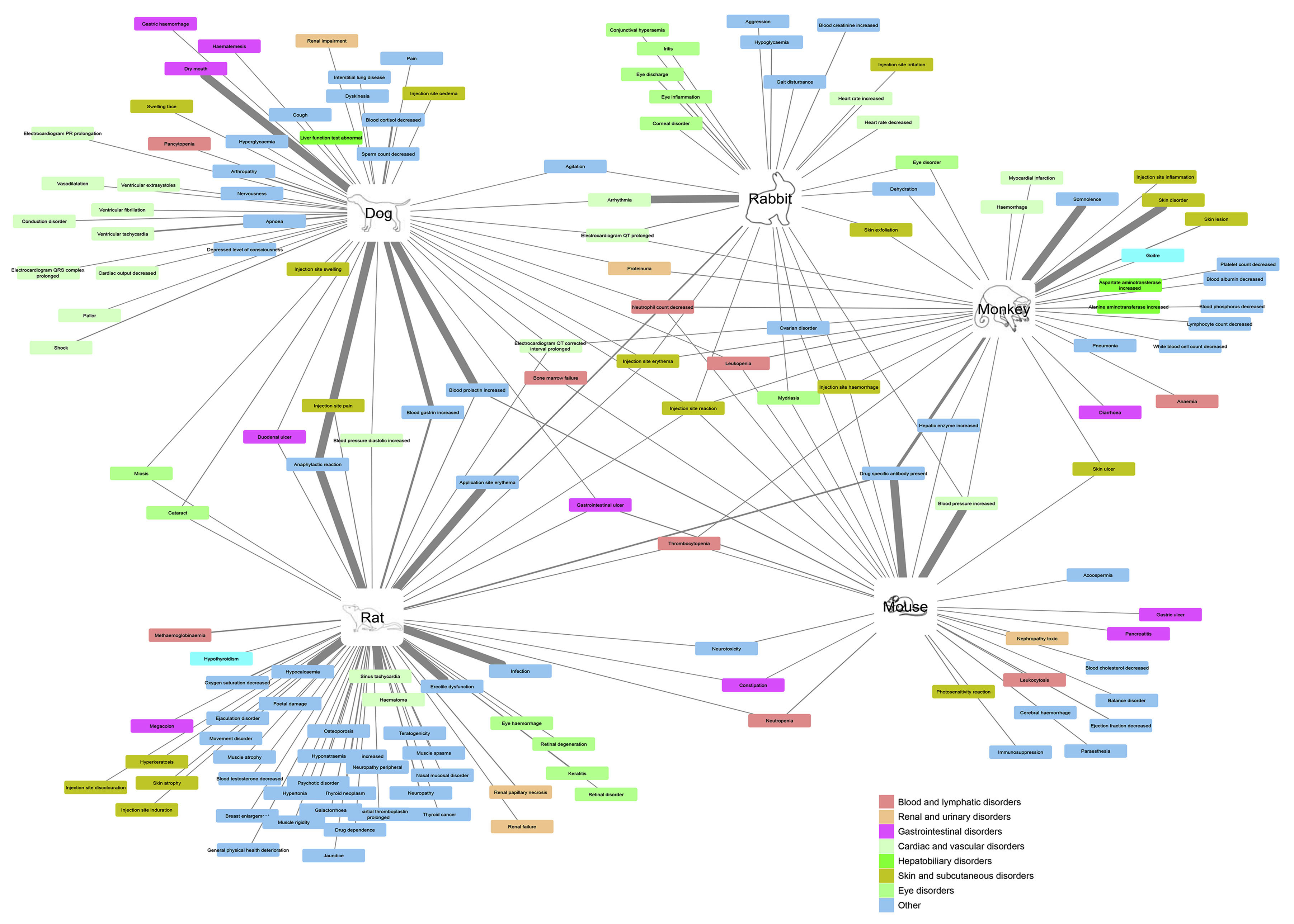 Confident they could identify even more predictive events with a big data analysis, Drs. Clark and Steger-Hartmann analyzed 1,637,449 adverse events reported in both humans and five of the most commonly used animals, for 3,290 approved drugs and formulations. The study was published open access in the July 2018 issue of Regulatory Toxicology and Pharmacology.

The team found a high degree of concordance between animal and human responses for cardiac events such as arrhythmias, which can lead to sudden death. Other strong correlations were found for constipation, injection site reactions, low blood counts, ALT increases and gastrointestinal problems. In almost all these cases, the animal studies conducted for specific drugs predicted what could happen in people.

“One of the most interesting findings,” Dr. Clark said, “was that some effects observed in some animals have never been reported as an adverse event in humans, whereas some events that routinely occur in humans haven’t been reported in an animal study.” For example, tendon rupture is an increasingly important adverse event that has not been observed as part of a preclinical study for drug approval. Having access to this information before embarking on animal studies could go a long way toward reducing such studies, either because the study would be redundant — i.e., the results for certain classes of drugs are already well established — or because a particular event won’t be detectible in an animal study.

Knowing whether more than one adverse event (liver and heart, for example) occurring in a specific species is predictive of what might happen in people could also allow researchers to test for two events simultaneously, thus reducing the amount of animal testing needed. It also helps point out that some events, like tendon rupture, are not observed as part of normal animal tests, so one has to go to some lengths to specifically test for those.

Elsevier has created an analysis based on the study findings that enables researchers to more accurately predict human risk using parameters such as species, adverse event and drug formulation, which could be especially useful for startups and organizations that don’t have researchers with deep expertise in this area, according to Dr. Clark. “It also gives every organization a more systematic, consistent and scientific basis for assessing the safety impact of animal studies, with knowledge from what has already been done,” he explained.

Next steps: a look at dosing and predictive models

The project’s next phase involves adding dosing to the database. In animal studies, researchers continue to increase the dose of the drug until an adverse event occurs. But an event may not occur until the dose is increased tremendously, way beyond what a human might take before getting a symptom like a headache or a hint that a problem might arise in the heart or another organ. The Elsevier team is using text mining and data analytics to determine dosing stratifications that could inform researchers whether and at what dose they might have to worry about a safety problem in people.

Meanwhile, Elsevier and others are involved in research on developing predictive models that could eventually bypass animal testing entirely. In fact, a recent study suggests that computer simulations could replace animal testing for heart drugs right now because they can predict adverse events more accurately than animal tests.

“The bottom line is that the potential of the data we already have is radically underappreciated,” Dr. Clark observed. In addition to the publicly available data compiled in PharmaPendium, “all labs have their own, proprietary data that could unlock further beneficial insights.” Elsevier is looking to partner with companies interested in combining their internal data with Elsevier’s so that the analyses would provide refined results, depending on the partner’s specific requirements.

“What’s exciting to me personally,” Dr. Clarke said, “is that although we’re an information analytics company, not a drug company, we can still participate in developing treatments for diseases. That’s a terrific feeling.”

Regulatory agencies on board

Regulatory agencies in the US and internationally are behind efforts to use alternative methods to animal testing when feasible. For example, the US Department of Health and Human Services’ National Toxicology Program has created a searchable table of alternative methods for chemical safety testing that are accepted by US and international regulatory authorities as “replacement, reduction, or refinement alternatives to required animal tests” for specific types of compounds. Further, in January, the agency produced “A strategic roadmap for establishing new approaches to evaluate the safety of chemicals and medical products in the United States,” with the aim of “ensur(ing) use of new approaches to toxicity testing that improve human health relevance and reduce or eliminate the need for testing in animals.”

The research by Drs. Clark and Steger-Hartmann and the new Elsevier database is part of this emerging paradigm, helping organizations globally to implement evidence-based computational approaches that accurately predict risk in the early stages of drug development, thereby helping to ensure patient safety as the drug moves through clinical trials and to the market.