Which fetal size standard should be used for diagnosing a small- or large-for-gestational-age fetus?

In this special supplement to the American Journal of Obstetrics & Gynecology (AJOG) leading experts describe six fetal growth size standards in current use and discuss their strengths and limitations. 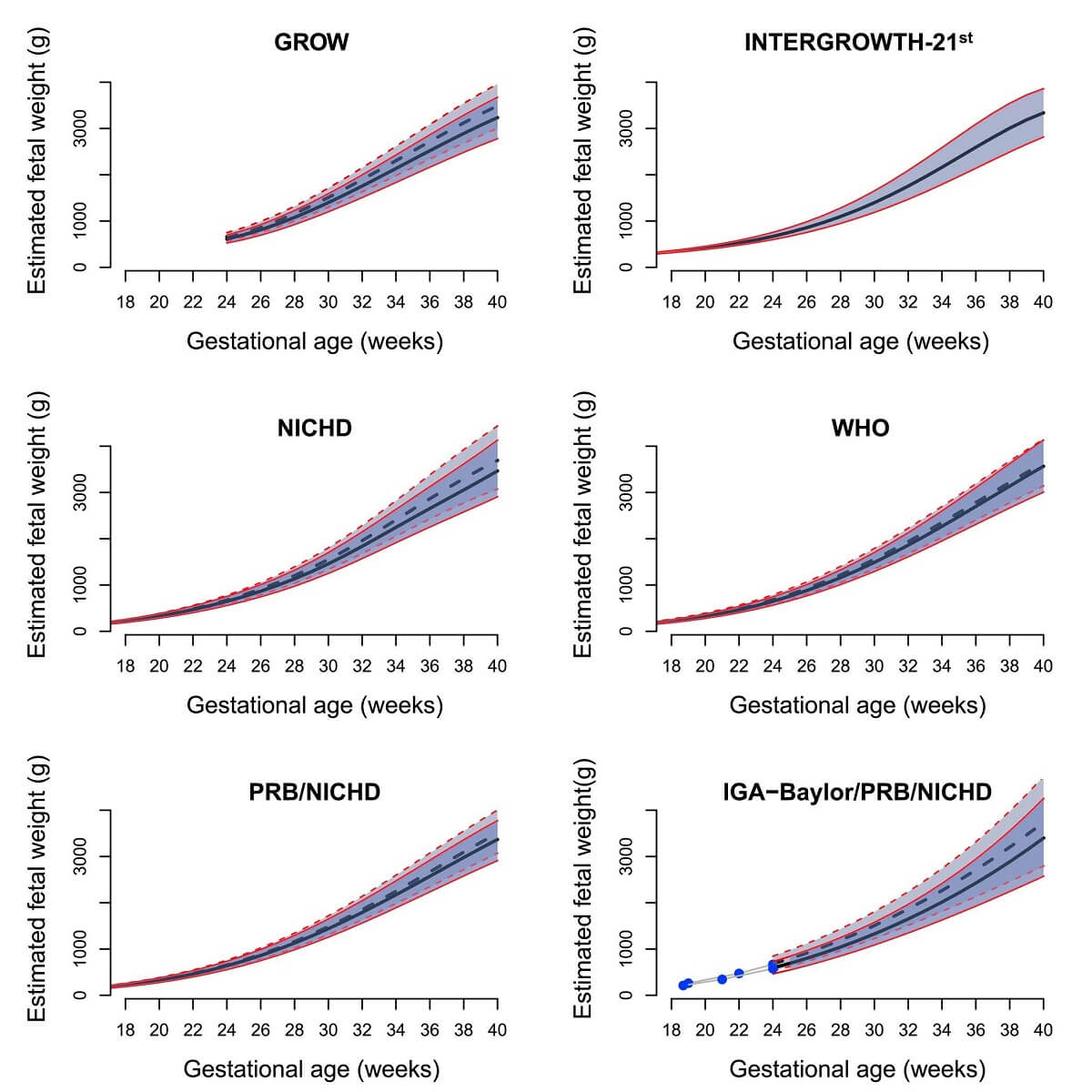 This figure illustrates the six different fetal size standards choices presented in this supplement and represents the assumptions made by the investigators when they developed the size standards.

It is estimated that at least 13 million newborns are small for gestational age (SGA) in low- and middle-income countries. Fetal growth acceleration can lead to a large for gestational age (LGA) neonate. Standards for the assessment of fetal growth and birthweight are essential for providing good clinical care and have become even more important with increasing evidence that growth-related problems are potentially avoidable and may have long-term consequences. Due to the proliferation of fetal size standards, practicing obstetricians are faced with different guidelines for diagnosing an SGA or LGA fetus.

“An SGA fetus is at greater risk for fetal death and perinatal death, fetal distress requiring a Cesarean delivery, and short- and long-term complications. For example, a recent study suggests that 15 percent of babies who are born SGA at term have difficulties climbing stairs and composing sentences with more than two words at the age of two,” comments Roberto Romero, MD, DMedSci, MD, Chief of the Perinatology Research Branch of the NICHD/NIH, Bethesda, MD. “Infants who were born SGA are at greater risk for the development of adult disease such as diabetes, hypertension, and cardiovascular disease in the form of heart attack, stroke, etc. LGA infants are also at risk for complications.”

The practical question is which standard is best to detect SGA fetuses. Several have been proposed and are described in the accompanying figure. The pros and cons of each standard are a major subject of this special supplement.

International Fetal and Newborn Growth Consortium for the 21st Century (INTERGROWTH-21st)
José Villar, MD, Professor of Perinatal Medicine at the University of Oxford, and colleagues representing the INTERGROWTH-21st consortium explain that its purpose was to develop international, prescriptive standards for fetal growth assessed by ultrasound and fundal height, preterm postnatal growth, newborn size and body composition, maternal weight gain, and infant development at the age of two years. Funded by the Bill and Melissa Gates Foundation, it is the first comprehensive set of international standards of optimal fetal and newborn growth that perfectly match the existing World Health Organization (WHO) child growth standards.

The standard was developed from data collected in an international cohort of healthy, well-nourished women from eight urban areas in Brazil, Italy, Oman, UK, USA, China, India, and Kenya, who were at low risk of adverse maternal and perinatal outcomes. It concluded that in the absence of maternal constraints, fetuses grow at the same rate and that fetuses of all ethnic groups grow at a similar rate. The subject of growth rates among ethnic groups has been debated within the field.

The Birmingham team analyzed routinely collected maternity data from ten countries with a total of 1.25 million term pregnancies in their respective main ethnic groups. The GROW and INTERGROWTH-21st standards were each applied to the data to determine SGA and LGA rates, with associated relative risk and population-attributable risk of stillbirth. They found that customized assessment resulted in increased identification of SGA and stillbirth risk, while the wide variation in SGA rates using the INTERGROWTH-21st standard appeared to reflect differences in physiologic pregnancy characteristics in the ten maternity populations.

“There has been no evidence presented to suggest that INTERGROWTH-21st improves the identification of fetuses or neonates at an increased risk of adverse outcome,” observes Professor Gardini in an accompanying review published in AJOG. “To the contrary, there is evidence of significant variation between different populations and individuals and mounting evidence against a one-size-fits-all approach. It is more logical to adjust for the characteristics of each mother, taking her ethnic origin and her height, weight, and parity into account and to set a growth and birthweight standard for each pregnancy against which actual growth can be assessed. A customized standard better reflects adverse pregnancy outcome at both ends of the fetal size spectrum and has increased clinicians’ confidence in growth assessment, while providing reassurance when abnormal size merely represents physiologic variation.”

Dr. Kiserud explains, “The WHO fetal growth charts are intended to be used internationally based on low-risk pregnancies from populations in Africa, Asia, Europe, and South America. We consider it prudent to test and monitor whether the growth charts’ performance meets the local needs, because refinements are possible by a change in cut-offs or customization for fetal sex, maternal factors, and populations. This study has different conclusions from those proposed by INTERGROWTH-21st.

Fetal Growth Study by NICHD
The Eunice Kennedy Shriver National Institute of Child Health and Human Development (NICHD) fetal size charts were developed by studying pregnant women of different ethnic groups living in the US (Caucasian, African-American, Hispanic, and Asian). Unlike the customized approach of GROW, the authors did not assume that ethnicity does not have a proportional effect on estimated fetal weight during gestation, and hence, the investigators derived separate charts for each ethic group. The study included a low risk population of women who delivered at term.

An expert review by Katherine L. Grantz, MD, MS, of the NICHD, and colleagues, compares and contrasts the NICHD Study, INTERGROWTH-21st, and WHO Multicentre Growth Reference Study and draws conclusions in light of differences in aims, sampling frames, and analytical approaches.

“Assessment of fetal growth with a one-time measurement remains standard clinical practice, despite recognition that a single measurement can indicate only size,” comments Dr. Grantz. “Ultimately, it is knowledge about fetal growth in addition to other factors and clinical judgment that should trigger intervention.”

Perinatology Research Branch (PRB of NICHD) – Detroit, Michigan, USA
The Perinatology Research Branch of the NICHD describes the development of a fetal size/growth chart derived from longitudinal estimated fetal weight data from African American women in Detroit and compares this with three existing standards. The investigators observe that fetal sex and maternal height have a proportional effect during gestation, while maternal weight and parity have an increasing effect on estimated fetal weight with advancing gestational age. They define fetal size for a pregnancy with optimal conditions (excluding the effect of clinical pathology) in a manner similar to that described by the customized GROW approach. “This standard classified more fetuses as being at risk for SGA compared to existing standards, especially among fetuses delivered preterm, but classified about the same number of LGA,” comments Dr. Roberto Romero, who led the study. “The comparison among the four growth standards revealed that the most important factor determining agreement among standards is whether they account for the same factors known to affect fetal growth.”

Accumulating evidence suggests that perinatal morbidity is associated with abnormal fetal growth velocity of the abdominal circumference in both SGA and LGA infants, report Russell L. Deter, MD, of Texas Children’s Hospital, and colleagues. They describe the conceptual framework for a practical and freely available software application, the Individualized Growth Assessment Program (IGA), which has been developed to allow implementation of this approach for clinical and research purposes. The IGA assumes that the growth potential of a fetus can be inferred from the rate of growth derived from two or three observations during the second trimester. “Individualized growth assessment provides a comprehensive method for identifying third-trimester fetal and/or neonatal growth abnormalities based on an individual’s growth potential,” explains Dr. Deter. “The clinical use of individualized growth assessment to characterize abnormal growth and its relationships to physiological changes, perinatal complications, and long-term disabilities warrants further study.”

The most important contribution of this method that it uses the growth rate of each fetus individually as its own control to assess growth potential.

Dr. Romero adds that “this supplement represents a major commitment by AJOG and its publisher, Elsevier, to improve the healthcare of pregnant women, unborn children, and their families by making this collection of high quality expert reviews and original research freely available to all readers worldwide.”

Full text of all the articles is also available to credentialed journalists upon request. Contact Eileen Leahy at +1 732 238 3628 or ajogmedia@elsevier.com to obtain copies. Dr. Roberto Romero may be reached at +1 313 330 9978 or prbchiefstaff@med.wayne.edu.

About the American Journal of Obstetrics & Gynecology
The American Journal of Obstetrics & Gynecology, known as “The Gray Journal,” presents coverage of the entire spectrum of the field, from the newest diagnostic procedures to leading edge research. The journal provides comprehensive coverage of the specialty, including maternal-fetal medicine, reproductive endocrinology/infertility, and gynecologic oncology. It also publishes the annual meeting papers of several of its eight sponsoring societies, including the Society for Maternal-Fetal Medicine and the Society of Gynecologic Surgeons. The journal has also been recognized as one of the 100 most influential journals in Biology & Medicine over the last 100 years, as determined by the BioMedical & Life Sciences Division of the Special Libraries Association (2009). www.AJOG.org