Veterans battle homelessness long after discharge from the military

According to a new study in the American Journal of Preventive Medicine, published by Elsevier, homelessness among US military veterans rarely occurs immediately after military discharge, but instead takes years to manifest with risk increasing over subsequent years. The study shows that this sleeper effect delay is evident among veterans who served before the Persian Gulf War era, as well as more recent groups from the post-9/11 conflicts in Afghanistan and Iraq.

“The study points to the long-life cycle leading to homelessness among veterans. It often takes years for problems stemming from military service to build up before a veteran becomes homeless,” explained Jack Tsai, who holds a doctorate in clinical psychology and is a clinical psychologist and health services researcher. “The team and I found that the risk increases exponentially over time in the period 5-15 years post-military discharge.”

Dr. Tsai is research director for the US Department of Veterans Affairs, National Center on Homelessness Among Veterans, Tampa, Florida, USA. He is also affiliated with the School of Public Health, University of Texas Health Science Center at Houston, San Antonio, TX, and the Department of Psychiatry, Yale University School of Medicine, New Haven, CT.

Data from two nationally representative samples were analyzed, including the records of 275,775 homeless veterans who used Department of Veterans Affairs (VA) services from 2000–2019, as well as a 2018 population-based community survey of 115 veterans with a history of homelessness. The average time between discharge and homelessness was found to be 5.5 years in the VA sample and 9.9 years in the survey sample.

Significant factors associated with longer discharge-to-homelessness periods include service in the Vietnam War, younger age at military discharge, income, and chronic medical and psychiatric conditions (e.g., depression and alcohol abuse). The findings suggest that some medical and psychiatric conditions take time to develop and do not quickly lead to homelessness but follow a more chronic course that, if untreated, can eventually lead to homelessness.

Deployments to the post-9/11 conflicts in Iraq and Afghanistan were significantly associated with shorter duration between discharge and homelessness, a phenomenon that is accelerating. Among homeless VA service users discharged from 2000 to 2008, it took 10 years or more for 10 percent of them to become homeless; among those discharged from 2009 to 2014, more than 10 percent were homeless seven years after discharge. This finding confirms previous research that veterans returning from Iraq and Afghanistan experience considerable difficulties with social adjustment. 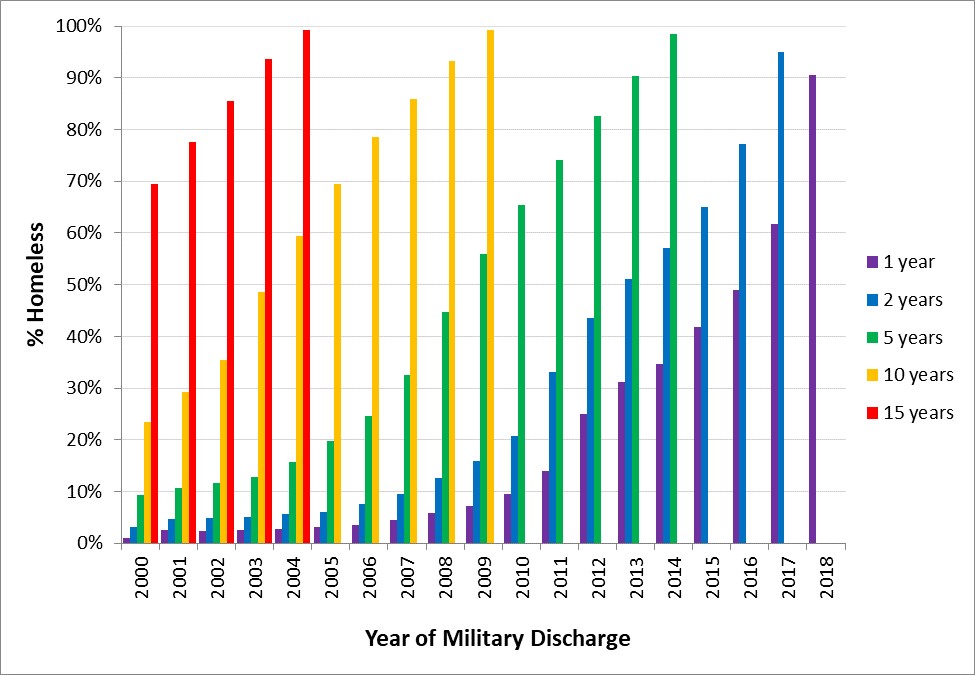 “Understanding what happens to people after they leave the military and at what point they become homeless is important for policymakers, service providers, veterans, and their family members in order to prevent new generations of veterans from becoming homelessness. Those who end up homeless have very low quality of life, and developing strategic early interventions at various stages after military discharge can mitigate that risk,” noted Dr. Tsai.

Primary and secondary prevention focused on chronic health conditions and social adjustment are crucial to prevent homelessness among these veterans. Further research is needed on how best to deploy resources to develop innovative interventions to prevent homelessness among veterans. The study also points to the effect of intersectional macro socioeconomic issues, such as the lack of affordable housing, unemployment, and barriers against subgroups (women veterans with children and veterans with cognitive impairments).

This study was supported by the VA National Center on Homelessness Among Veterans.

Full text of this article is available to credentialed journalists upon request; contact Jillian B. Morgan at +1 734 936 1590 or ajpmmedia@elsevier.com. It will also be openly available for 60 days following publication at www.ajpmonline.org/article/S0749-3797(20)30096-9/fulltext. Journalists wishing to interview the authors should contact VA Media Relations at vapublicaffairs@va.gov.