Indian researchers pioneer an alternate use for sugarcane waste

From Britain to Mexico, countries are considering sugar taxes to reduce consumption and curb the global obesity epidemic. In 2014, about 600 million people, roughly double the population of the United States, were obese. Addressing the problem earlier this year, the World Health Organization pointed the finger at high sugar consumption, in particular through sugar-sweetened beverages.

At the same time, sugar industry associations and sugarcane growers warn for huge job losses if countries discourage their citizens from consuming sugar. In South Africa, for example, the industry warns that a mooted sugar tax will cut at least 60,000 jobs.

But now, Indian researchers have found a new use for sugarcane pulp, as a source of highly fluorescent carbon quantum dots, in a study published in Applied Surface Science. This alternate use of sugarcane waste, or bagasse, could not only reduce the amount of agricultural waste contaminating the environment but also offers a new revenue stream for farmers. 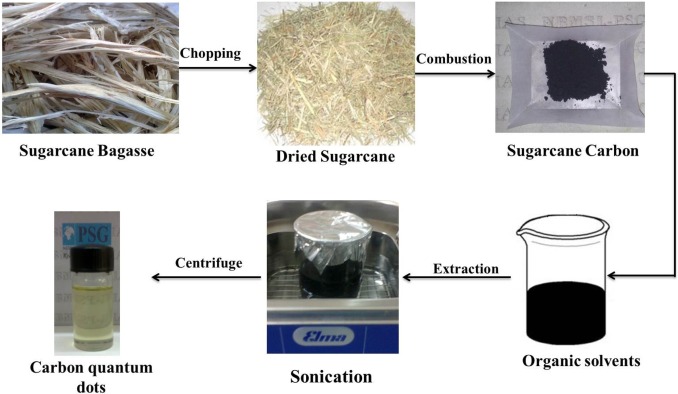 This schematic representation illustrates the process of turning bagasse into carbon quantum dots.

“In our study, we developed a simple, low-cost and efficient method for green synthesis of fluorescent carbon quantum dots from sugarcane bagasse,” says Dr. Ravi Shankaran Dhesingh, co-author of the paper and associate professor at the National Centre for Nanoscience and Nanotechnology at the University of Madras, Chennai, India.

These dots are tiny carbon nanoparticles, which are about four nanometers across. For an idea of scale, 110 billion of these dots, more than the number of stars in the Milky Way, would fit on the head of a pin.

Because they emit light and are non-toxic, carbon quantum dots can serve as biosensors, in light-emitting diodes and even to deliver drugs around the human body. For example, researchers have injected liquids containing carbon quantum dots into a living body to image it from the inside.

This research demonstrates a new method of producing these versatile nanoparticles. To begin with, the Indian team cut the sugarcane bagasse into small pieces and sun-dried it for six days. After burning the dry bagasse, they chemically oxidized and exfoliated it.

While this approach produces a useful substance, it also removes agricultural waste from the environment. More than 90 countries produce sugarcane, and by extension, sugarcane waste. “Huge quantities of agricultural residues – rice husks, sugarcane bagasse and coconut husks – are produced annually around the world, and these are vastly underutilized,” Dr. Shankaran said.

To make sugar, machines crush the sugarcane stalks to free the sugary juice inside them. This juice, when dried and crystallized, will become the sugar you put in your coffee. But every three tons of sugarcane crushed to produce sugar in a factory will yield about one ton of bagasse.

There have been many attempts to use sugarcane bagasse, but it is a difficult material to work with. It is unsuitable for paper production because it is very stringy. It is often used as biofuel, but about half of the bagasse is unusable for this because it is too wet. “Conversion of solid waste – whether agricultural, food, domestic or industrial – is an important area of research,” Dr. Shankaran explained. “Nanotechnology is the latest field to provide the opportunity to create novel materials for high-performance applications from such waste.”

Given the dwindling margins of sugarcane producers, nanomaterials could provide an answer for both the environment and industry. “The conversion of solid waste to functional nanomaterials provides a new avenue in solid-waste management, as well as in the production of novel materials,” Dr. Shankaran added.

While sugar is falling out of favor around the world, sugarcane residue is becoming a useful commodity. "This agricultural waste is a renewable and sustainable resource, which makes the work a promising example of the concept of waste to wealth," concluded Dr. Shankaran.

About Applied Surface Science
Applied Surface Science covers topics contributing to a better understanding of surfaces, interfaces, nanostructures and their applications. The journal is concerned with scientific research on the atomic and molecular level of material properties determined with specific surface analytical techniques and/or computational methods, as well as the processing of such structures.