Initial treatment success with imiquimod appears to be sustained over a five-year period, reports the Journal of Investigative Dermatology

Basal cell carcinoma (BCC), a type of skin cancer, is the most common form of human cancer. With a growing aging population, BCC rates are climbing at an alarming rate, with reported cases rising by as much as 10% per year. Rising demand makes a simple and effective treatment for BCC appealing to both practitioners and patients. A new study funded by Cancer Research UK and published in the Journal of Investigative Dermatology examines the effectiveness of imiquimod, a topical skin cream used to treat low-risk BCC lesions, over a five-year period. Investigators found that imiquimod success rates were sustained for the extended study period and did not promote lesion reoccurrence.

Currently, the gold standard of treatment for BCC is excisional or Mohs surgery, both of which require a dermatologist or plastic surgeon. Requiring specialized care for such a ubiquitous and mostly low-risk cancer can tie up resources that are needed for more serious and difficult cases. In order to help alleviate some of the burden, alternative treatments for BCC are emerging, many of which can be administered by general practitioners. One of these treatments is imiquimod, a topical treatment cream that boosts the body’s immune response.

This extension of a prior study, which looks at the effectiveness of imiquimod treatment, is based on a previously conducted randomized control trial (RCT) that followed BCC patients for three years post-treatment. The first study had an 83.6% success rate for patients treated with imiquimod, versus 98.4% for traditional surgery. In the additional two years of follow up time tracked in this new study, researchers found that 82.5% of imiquimod patients had successful outcomes at the five-year mark compared to 97.7% for surgery.

“The absolute response rate for topical imiquimod of 83% at five years, although clearly inferior to the 98% for excisional surgery for low-risk BCC, might still represent a clinically useful treatment modality, because a cream treatment can be carried out in a primary care setting, and some patients may also prefer the option of a cream rather than surgery,” remarked lead investigator Hywel C. Williams, DSc, FMedSci, NIHR Senior Investigator, Professor of Dermato-Epidemiology and Co-Director of the Centre of Evidence-Based Dermatology at the University of Nottingham, Nottingham, UK. “If you had told me 15 years ago that one day we would be treating low risk nodular and superficial BCC with a cream that enhanced the body’s local immune response, I would have walked away. But it is a reality nowadays.” 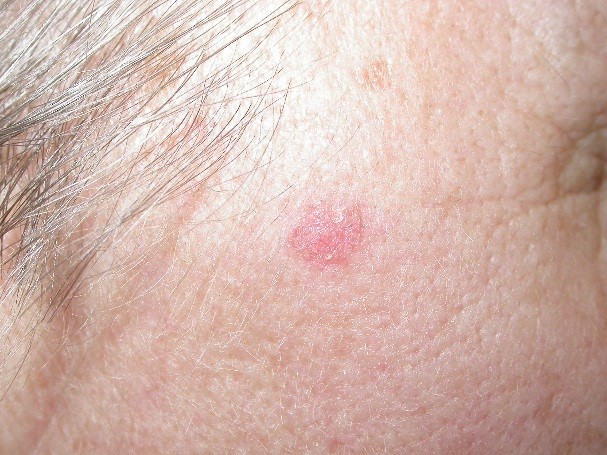 An example of a small, superficial BCC lesion that might be treated with imiquimod

Doctors have expressed concerns that the use of topical treatments instead of surgery may leave patients vulnerable to so-called “submarine lesions,” which can emerge after the superficial cancer appears to have been treated. However, mirroring the results of the three-year follow-up, the extended five-year study illustrates that if imiquimod treatment is successful in the first year, BCC reoccurrence is unlikely. “Most treatment failures with topical imiquimod occurred in the first year of treatment, a finding that throws light on the possible mechanisms of topical immunotherapy of skin cancer, suggesting that once an immunological response has occurred, such a response is sustained,” said Professor Williams.

These new data are important information for practitioners and their patients to consider with treatment options for low-risk BCC. This new study confirms that if a benefit is seen from imiquimod treatment, those results are likely to hold over a five-year period. Added Professor Williams, “Very few RCTs have been conducted for BCC, which is odd considering that it is the most common form of human cancer. Only a handful of such RCTs have been followed up for five years, which is important as some treatments, such as photodynamic therapy, produce reasonable results in the short term, but seem to result in more and more recurrences the longer patients are tracked.”

Investigators hope that these findings will encourage further research to develop creams that work in a similar way, yet produce better results. For now, this information provides an important part of the roadmap for treating BCC and potentially alleviating some of the burden on specialized health care providers.

“The most important results are the precise estimates of three- and five-year tumor clearance for imiquimod cream versus surgery,” concluded Professor Williams. “This will allow patients and their doctors to engage in a shared decision-making conversation on a range of possible treatment options. Because BCC is reaching epidemic proportions, some countries like the UK are struggling to keep up. One possible strategy for the future is to treat more low-risk (biopsy proven) BCCs with imiquimod cream and only refer patients who don’t respond to secondary care services.”

Full text of this article is available to credentialed journalists upon request. Contact George Woodward at +1 215-605-3050 or g.woodward@elsevier.com to obtain copies. Journalists who wish to speak with the authors should contact Emma Thorne, Media Relations Manager, The University of Nottingham, at +44 115 951 5793 or Emma.Thorne@nottingham.ac.uk.

This study was funded by Cancer Research UK. www.cancerresearchuk.org