New study in mice helps scientists understand how tamoxifen reduces food intake and prevents fat accumulation, insulin resistance, and fatty liver deposits, according to a report in The American Journal of Pathology

Tamoxifen, a selective estrogen receptor modulator, is the gold standard for endocrine treatment of estrogen-receptor positive breast cancer. Tamoxifen is also known to have metabolic effects. A new study in The American Journal of Pathologyreports that the drug also prevents obesity, fatty liver, and insulin resistance in female mice who were fed a high-fat diet and whose ovaries had been removed. The study was also able to pinpoint which estrogen receptors underlie these protective effects, opening up possibilities for new therapies to treat these conditions.

“For the past two decades, estrogen receptor α (ERα) has been identified as a key regulator of energy and glucose homeostasis and consequently proposed as a promising target to develop new therapeutic strategies to fight against obesity-related metabolic disorders, such as type 2 diabetes and nonalcoholic fatty liver disease. However, understanding the mechanisms of the metabolic protection conferred by ERα activation has been a crucial challenge,” explained Pierre Gourdy, MD, PhD, INSERM UMR1048, Institut des Maladies Métaboliques et Cardiovasculaires, Université de Toulouse (France).

Mice whose ovaries had been removed were fed a high-fat diet and treated with either tamoxifen or a placebo for 12 weeks. Investigators found that tamoxifen prevented weight gain, which was attributed to a significant reduction in food intake compared with controls. Tamoxifen-treated mice were less likely to develop glucose intolerance, insulin resistance, as well as deposits of fat in the liver.

The researchers knew that ERα exerts its effects through two activation functions known as ERα-AF1 and ERα-AF2, directly involved in the transcriptional regulation of gene expression. Tamoxifen acts as an ERα-AF1 agonist or an ERα-AF2 antagonist according to its tissue/organ targets. To better understand the molecular mechanisms underlying tamoxifen’s metabolic effects, the scientists treated mice genetically bred to be deficient either for the entire ER-α (ERα-/-) or just ERα-AF1 (AF1-/-) with either tamoxifen or placebo and compared the results to wild-type mice (ERα+/+ or AF1+/+) that underwent similar treatment. All the mice were fed a high-fat diet. 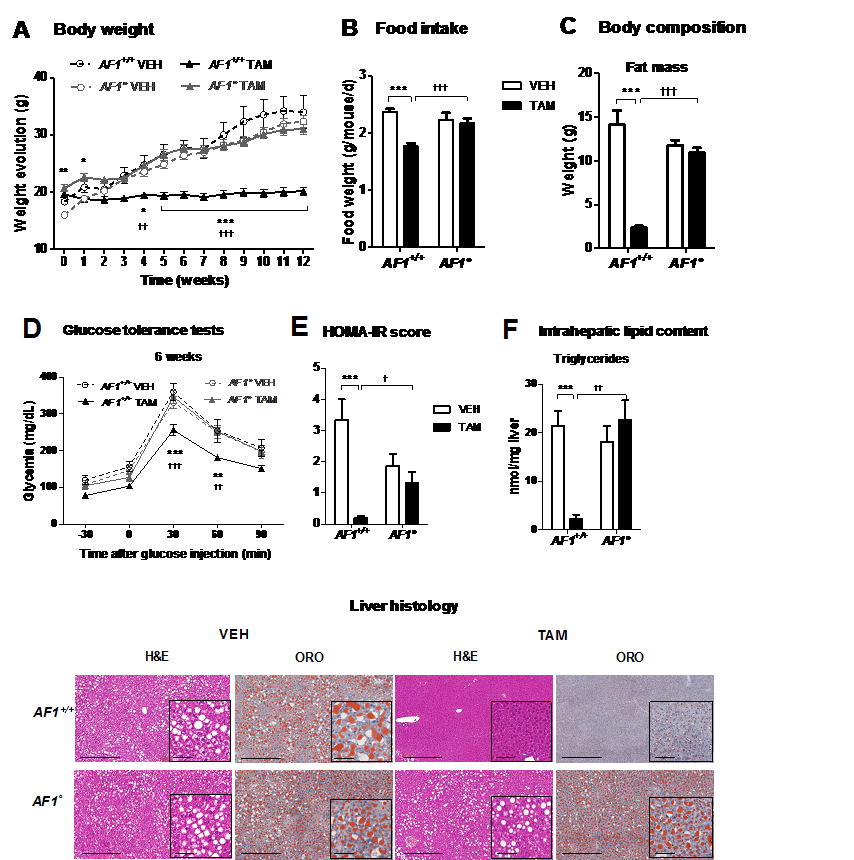 “Altogether, the present study first suggests that the metabolic effects of tamoxifen, as well as other selective modulators of ERα, deserve to be cautiously reconsidered in women, according to their menopausal status. It also opens new perspectives for the treatment of obesity-related complications toward a pharmacologic strategy eliciting selective ERα-AF1 activation,” noted Dr. Gourdy.

The leading global forum for reporting quality original research on cellular and molecular mechanisms of disease, The American Journal of Pathology is the most highly cited journal in Pathology – close to 40,000 cites in 2015 – with an Impact Factor of 4.206 and Eigenfactor of 0.05638 according to the 2015 Journal Citation Reports®, Thomson Reuters, 2016, and an h-index of 228 according to the 2015 SCImago Journal and Country Rank. http://ajp.amjpathol.org